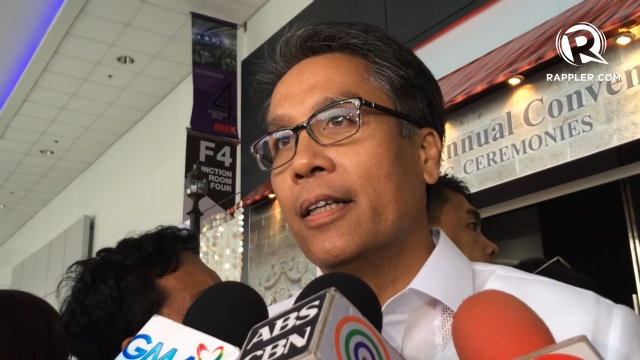 SARANGANI, Philippines – Despite the persistent questions and speculation from political allies, foes, and the media, Interior Secretary Manuel Roxas II on Friday, May 22, continued to dodge questions about his presumed run for the presidency in 2016.

He said, however, that the good of other Filipinos will be his primary consideration.

(I’m thankful for the trust our fellow Filipinos are showing, and I won’t turn my back on any challenge before me.)

Asked if he felt pressure from the speculations, Roxas said it is not a factor.

(It gladdens me because of a lot are interested in my plans, but, in the end, I’m going to think about what’s best for our fellowmen. I get strength, inspiration from them and that will always be my primary consideration.)

Just this week, Liberal Party ally and Senate President Franklin Drilon urged Roxas to declare his intentions for the 2016 elections. Roxas, who ran but lost as vice president in the 2010 elections, is the presumptive LP standard-bearer.

Some of his allies are pushing for Roxas to run as president and for neophyte Senator Grace Poe to run as his vice president. But another ally, Budget Secretary Florencio Abad, recently told a newspaper that a repeat of 2010 was possible – for Roxas to slide down as vice president, but this time in favor of Poe.

The numbers – if early national surveys are to be believed – swing in Poe’ favor. The senator is second only to frontrunner Vice President Jejomar Binay. Roxas, who is also the Liberal Party’s president-on-leave, is a dismal 5th or 6th.

Poe told media that although nothing concrete was offered to her in meetings with Roxas and President Benigno Aquino III, she got the impression that Chief Executive was looking for other options for 2016.

On Friday night, May 22, Roxas was also scheduled to meet with Davao City Mayor Rodrigo Duterte for exploratory talks on the 2016 presidential elections.

Some analysts have observed that Duterte could also be the LP’s wild card bet. – Rappler.com