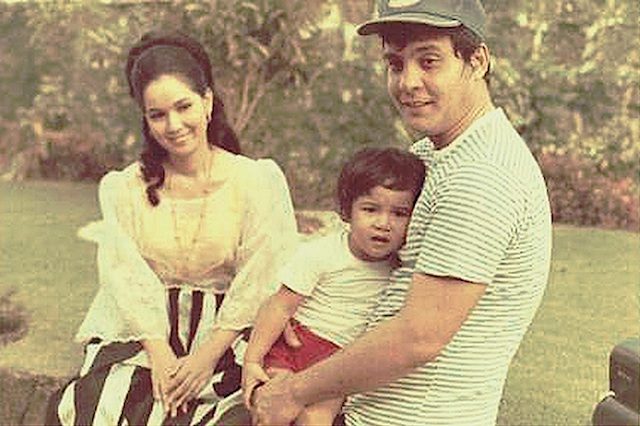 Facebook Twitter Copy URL
Copied
Does Senator Grace Poe want to be president? Like her father in 2004, she may have to first win the vote of the Supreme Court.

MANILA, Philippines – History may repeat itself in the Philippines should Senator Grace Poe decide to seek the presidency in 2016. The circumstances of her birth may become the subject of legal questions in the run-up to the elections – reminiscent of the court battle that her father Fernando Poe Jr (FPJ) faced in the 2004 presidential polls.

Is a foundling like her a natural-born Filipino citizen and thus eligible to seek the post? She was stateless, said the camp of 2016 front runner Vice President Jejomar Binay, because the citizenship of her real parents are not known.

FPJ, on the other hand, was born out of wedlock. The petitioner said he acquired the citizenship of his American mother at birth because his father – a Spanish-turned-Filipino citizen – did not acknowledge him in his birth certificate. The Supreme Court (SC) favored FPJ’s candidacy, but the decision did not come until March 2004 or two months before the polls.

Will the issue also distract Grace Poe’s campaign? Will the gods of Padre Faura favor her candidacy?

“Legally speaking, it could go either way from a technical point of view,” a lawyer who has publicly supported arguments in favor of Poe’s natural-born Filipino citizenship told Rappler.

“If Binay has the votes in the SC, he could swing a disqualification. But the court will also think twice if political consequences are damning.”

Lawyer Harry Roque, a known supporter of Binay, told Rappler he can also argue the case either way – the protection of the interest of the child versus the constitutional intention to limit certain government posts to natural-born citizens because “they are bound to be loyal to this country.”

That she acquired American citizenship later in her life further complicated the issue because of claims she will not meet another qualification: the 10-year residency requirement.

Binay may distance himself from the issues hurled by his men against Poe, but it will only take one petitioner to prompt what is expected to be a legal callisthenics. Ateneo School of Government dean Antonio La Viña said it should be a straight forward case: “Procedurally, the Comelec could decide by December and the [High] Court by March. Beyond that, I think the court might hesitate and treat this as a political question as it would be too disruptive to our political process.”

Whatever the outcome, legal challenges follow a process. Petitions against FPJ were filed before the Commission on Elections after he filed his Certificate of Candidacy (COC) and later elevated to the SC.

Former Comelec Chairman Sixto Brillantes Jr, FPJ’s former lawyer, said Poe will go through the same process. “It will be the same case filed against FPJ – material misrepresentation in the COC when he claimed to be a natural-born Filipino citizen.”

Comelec Chairman Andres Bautista refused to comment because it’s premature until she files her COC – due in October – and a formal petition is filed.

But Roque said it can be raised now before the Senate Electoral Tribunal (SET) because lawmakers also have to be natural-born Filipino.

This scenario may get the issue out of the way sooner. But the chairman of the SET is SC Associate Justice Antonio Carpio, who in 2004 voted against FPJ’s qualification.

Carpio argued that FPJ was also unable to prove that his known Filipino father was his real father, which he said is important to verify in case of an alien mother.

Legal challenges against FPJ and Grace Poe are emotional issues – both involved the rights of illegitimate children and foundlings.

FPJ was born in 1939, and his case required scrutiny of laws spanning the Spanish Occupation to the American Colonial Rule. The court voted 8-5 to alllow FPJ’s candidacy, but the ruling was not conclusive. Documents that could have shown, among others, if his father acquired Filipino citizenship before or after he was born were missing. Many government documents were destroyed during the World War II.

“While the totality of the evidence may not establish conclusively that respondent FPJ is a natural-born citizen of the Philippines, the evidence on hand still would preponderate in his favor enough to hold that he cannot be held guilty of having made a material representation in his certificate of candidacy,” read the majority ruling.

It quoted constitutionalist Joaquin Bernas, who argued that the illegitimacy is irrelevant to public office.

‘What is the relevance of legitimacy or illegitimacy to elective office? What possible state interest can there be for disqualifying an illegitimate child from becoming a public officer? It was not the fault of the child that his parents had illicit liaison. Why deprive the child of the fullness of political rights for no fault of his own? To disqualify an illegitimate child from holding an important public office is to punish him for the indiscretion of his parents. There is neither justice nor rationality in that. And if there is neither justice or rationality in the distinction, then the distinction transgresses the equal protection clause and must be reprobated.’

He was  one of the Amicus Curiae (friends of court) consulted by the justices.

Grace Poe’s case is much easier to resolve, argued Brillantes, because the court will not have to scrutinize as many laws. It only has to decide the rights of foundlings.

“This is easier. There is no question that she was found here, di ba? Because she was born here in the Philippines, the presumption is her real parents are Filipinos,” Brillantes told Rappler.

La Viña raised the 1954 Convention Relating to the Status of Stateless Persons to argue in favor of this presumption. “What are the rights of foundlings and children under our law? I say very strong – their best interest is always promoted in the Constitution and in many laws,” he argued. (READ: In Iloilo, Grace Poe finds new clues to real parents)

“The Comelec would have to do the fact finding and establish the facts of how she was found. This is crucial because if it is true that she was left in the cathedral on the day she was born, that proves that mother was in Iloilo that day. One can conclude many things from that fact alone,” La Viña added.

Roque disagreed. He said there is no question foundlings are granted Philippine citizenship. But a process need to be performed to perfect the citizenship, meaning they are not citizens at birth unless they can show that their real parents are Filipinos.

US citizenship and residency What United Nationalist Alliance interim president Tobias Tiangco raised about Poe’s residency is another matter. He said she can’t run for president or vice president in 2016 because she will not meet the minimum 10-year residency requirement.

For Brillantes, Poe’s residency is immaterial because being a natural-born citizen means she has been residing in the Philippines since birth.

Roque, however, said this is what makes Poe’s legal hurdles “at least twice more difficult to hurdle” compared to FPJ’s. “We know that FPJ’s father was Filipino and he (FPJ) was never a foreign national. In her case, we don’t know who her natural parents are and she really became a foreign national,” Roque said.

Poe said she “err[ed] on the side of prudence” when she wrote the date in her COC, but that the count should start from February 2005 when she decided to stay in the Philippines for good.

Poe got support from legal experts, who cited a case involving Imelda Marcos, which they said settled the issue through the animus revertendi doctrine – “with intention to return. “The intention to return to your place of origin is the basis of residence, and not actual, physical residence,” said La Viña.

Roque said the doctrine doesn’t apply because, unlike Marcos, Poe was a US citizen. The count should begin from the date she renounced her US citizenship, which Poe said was “sometime October 2010.”

In 2004, FPJ would lose the tight race to Gloria Arroyo, amid allegations of systematic cheating. He died later in the same year, prompting Grace to come home from the United States.

Poe’s politial rise has been exponential since she first entered government as chairman of the Movie and Television Review and Classification Board. Surveys show she may be the only one who can offer Binay a real challenge.

Should she respond to the surveys, will the Supreme Court stop her in her tracks? Unless her real parents suddenly show up, she’ll have to first secure the vote of the gods at Padre Faura. – Rappler.com