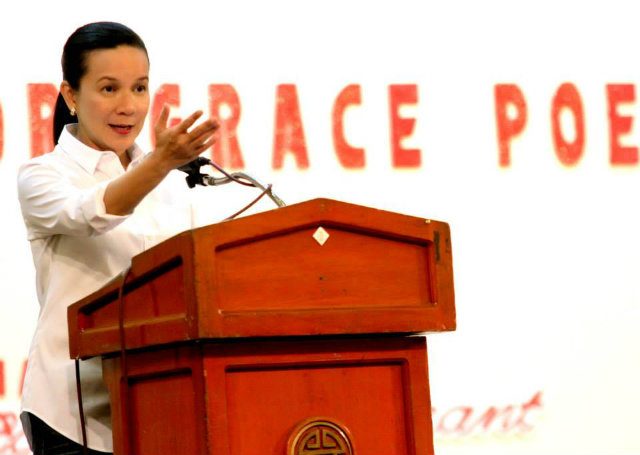 Facebook Twitter Copy URL
Copied
President Aquino meets with Senator Grace Poe for the second time but still does not offer her any post for 2016. Instead, he asks her to join him in his meetings.

MANILA, Philippines – Does President Benigno Aquino III want Senator Grace Poe to go through an internship-like preparation for the presidency?

Aquino met with Poe for the second time to discuss the 2016 presidential elections but still did not offer her any post. In the meeting in Malacañang at 1 pm on Wednesday, June 10, Aquino instead asked Poe to sit in his meetings as chief executive.

Poe disclosed the details of the “frank” meeting where she and the President discussed a “transition” for 2016. The meeting lasted two and a half hours.

(He invited me to observe things that he can do because he knows I also have questions, I have my own mind, so perhaps he wants to clarify if there are questions. For example, if he has a certain meeting with the agriculture sector, if I have questions, he is inviting me to join him in the meeting so I can observe.)

Asked why Aquino extended the invitation, Poe said it was probably because she asked him many questions about some of his programs of government like those on inclusive growth and irrigation.

(He said, “Next week, come here,” but I said I have a prior commitment. He said, anytime, and his line is open.)

Poe smiled when reporters joked that the invitation sounded like an on-the-job training (OJT).

This is the second time Aquino and Poe met to discuss the 2016 polls after a first meeting on May 5 also in Malacañang. Aquino is the chairman of the ruling Liberal Party (LP).

An independent senator, Poe is widely seen as a formidable candidate for higher office because of her strong survey showing. The neophyte politician ranks second only to opposition standard-bearer Vice President Jejomar Binay, while LP president-on-leave and presumptive presidential bet Interior Secretary Manuel “Mar” Roxas II is lagging behind.

Like in the first meeting, there was no clarity on whether Aquino wanted Poe to become the administration candidate for president or vice president.

“Malamang kinokonsidera niya siguro ako, pero ‘di ko alam talaga kung anong posisyon. ‘Di namin pinag-usapan,” Poe said. (Maybe he is considering me, but I really do not know for what position. We did not discuss that.)

Aquino told Poe that he will announce his chosen candidate after his State of the Nation Address on July 27 but did not indicate the exact date.

Poe said she and Aquino will meet again, depending on the President’s availability.

‘Be ready just in case’

Poe said Aquino also did not mention who she should team up with if she seeks a higher post under the administration banner.

(The President did not say that you should be in tandem with this or that or that I need to do this or that. He just said I should be ready, just in case, to continue his good leadership.)

The senator added that she made it clear to Aquino that she prefers to remain independent. He in turn explained his party’s process of choosing candidates for 2016.

(He said that the LP is fair in decision-making. All of them have an opinion. It’s not just one person or a few people. But I told him that I respect that, but because I am indepenent, and that also happened in the 2013 coalition. I also said that, my opinion on that.)

In 2013, the former censors chief ran under the administration ticket called Team PNoy but remained an independent candidate.

Poe said the President did not object when she mentioned her stand on maintaining her independence. She said Aquino did not force her to join the LP.

(Because I told him, “Mr President, you and even our countrymen know that it does not look good that politicians switch parties or join parties shortly before an election.” He understood that, but he also explained the LP stand, and I respect that they have a process for choosing candidates.)

LP stalwarts, including Senate President Franklin Drilon and Budget Secretary Florencio Abad, have said that they prefer that a member of the party become the administration candidate. Drilon and Speaker Feliciano Belmonte Jr endorsed Roxas, and urged him to declare his presidential candidacy now.

‘Aquino did not name Mar as bet’

Poe said Aquino did not tell her that Roxas is already the LP’s standard-bearer.

“Walang statement na ganoon, pero sabi niya mabuting tao si Sec Mar at may potensyal din. May kompyansa siya kay Sec Mar,” Poe said. (There was no statement like that, but he said Sec Mar is a good person. He trusts Sec Mar.)

In a previous interview, Aquino said Roxas remained “at the top” of his list of potential candidates following reports that he seemed inclined to choose Poe as presidential bet.

Yet Poe said that Aquino told her in their second meeting that his list of possible administration candidates included her close friend and fellow independent politician, Senator Francis Escudero.

“[The President] mentioned he will also talk to Senator Chiz. I did not have to tell him that I am more comfortable with Senator Chiz because they know each other for a longer time,” Poe said.

On LP members’ statements that they do not want Escudero as candidate, Poe said, “But the President said they have a democratic process of choosing. So it depends how many LP members think that way. We don’t know. If they include everyone, and even NGO members, their decision might change.”

After her second meeting with Aquino, Poe said that she would rather decide on her political plans close to the filing of certificates of candidacy in October. She said her ultimate consideration is the programs she can offer to the people.

She admitted, “Wala rin naman akong makinarya at limitadong-limitado kung mayroon man akong pera.” (I don’t have machinery, and if I have money, that is so limited.) – Rappler.com