The launch event, called “Train the Trainers,” presented the lay movement’s new educational materials to almost 200 representatives from dioceses all over the Philippines.

The materials included an image or mural, a “Maka-Pilipinas Anthem,” and a pledge called “Panatang Maka-Pilipinas,” created by HeroIXM of the IdeasXMachina (IXM) advertising company. HeroIXM is a creative partner and volunteer of PPCRV, which guided and collaborated with them throughout the process.

The PPCRV will also provide five modules and 16 trainer guides on “good citizenship values,” which can be found in the Constitution.

“We believe that through the living and the sharing of these basic values – not only by ourselves, but especially by our candidates – can our national vision of improving moral standards in government and in society be achieved,” PPCRV chair Myla Villanueva said at the launch.

Below is a look at the pledge and mural that were presented on Saturday, as well as a video of the anthem. 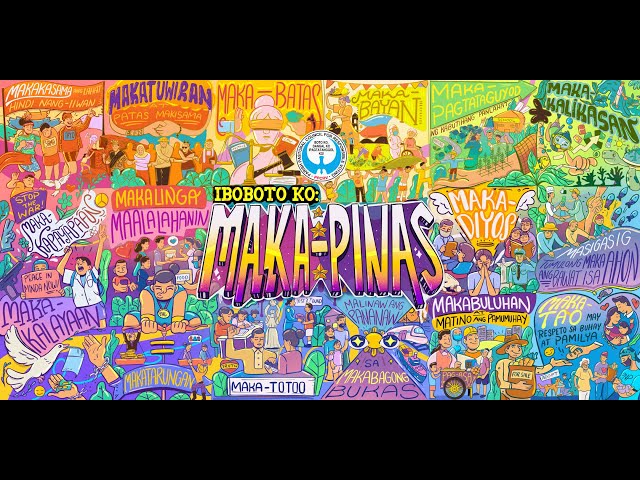 The training kicked off with getting to know Filipino voters through various statistics. They are also presenting these 16 “Good Citizenship Values” that are present in our Constitution. pic.twitter.com/PafVp7V9sz

HeroIXM Executive Director and co-founder Rey Leuterio said the materials they created for PPCRV were inspired by these 16 values, which were translated to Filipino by poets. Aside from the mural, anthem, and pledge, HeroIXM also created four key visuals that Leuterio said embodies the good citizenship values.

“It’s really just to say na itong values na ito para sa ating lahat as Filipinos,” Leuterio said of the key visuals. “And makikita ‘nyo, iba-iba ‘yung interpretation namin of the values, and we encourage people to also take a look at the values, make them your own. If you want to make your own version, go ahead.”

(It’s really just to say that these values are for all of us as Filipinos. And you’ll see that we have many different interpretations of the values, and we encourage people to also take a look at the values, make them your own. If you want to make your own version, go ahead.)

The five modules, 16 trainer guides, and copies of the mural, anthem, and pledge will be available after the PPCRV’s launch forums, which will happen on the following dates:

Each diocese will have 20 to 30 slots at the launch forums for their PPCRV coordinators and members of other ministries.

Saturday was also the last day of voter registration in Commission on Elections (Comelec) offices and satellite sites across the country. The poll body expects to sign up 65 million voters once the registration ends. – Rappler.com