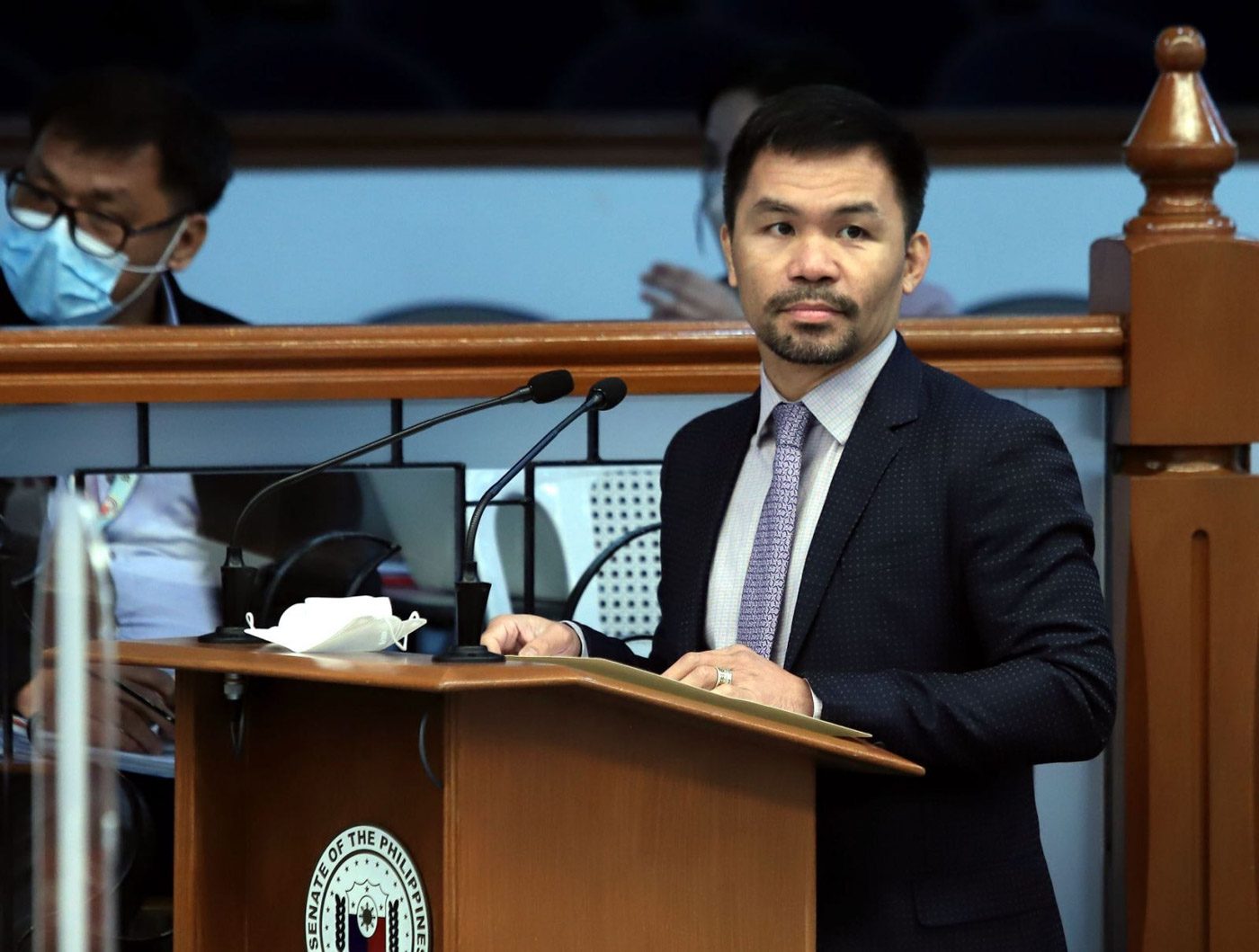 PACQUIAO RENEWS APPEAL TO PASS BOXING COMMISSION BILL: Sen. Manny Pacquiao, defending Senate Bill No. (SBN) 2077 or An Act Creating the Philippine Boxing and Combat Sports Commission, reiterates his appeal to colleagues to support the measure Wednesday, May 26, 2021. Replying to Sen. Pia Cayetano's interpellation, Pacquiao stressed that while the government has spent billions of pesos to promote the country, boxing has already placed the country in the world map. Pacquiao clarified that the commission will focus on promotion of boxing and combat sports and the welfare of the professional boxers because of the danger it poses to athletes, and that professional boxers, who survived the many bouts, ended up languishing in poverty after retirement. (Albert Calvelo/Senate PRIB)

Cracks within the ruling Partido Demokratiko Pilipino-Lakas ng Bayan (PDP-Laban) continued to emerge after the acting party president, Senator Manny Pacquiao, told members to “ignore” the call of party vice chairman Alfonso Cusi for a national assembly on May 31.

Rappler obtained a copy of Pacquiao’s memorandum circular dated May 25 sent to PDP-Laban members, where he “strongly” advised them against heeding Cusi’s invitation since “this is not the time for politics.”

PDP-Laban executive director Ron Munsayac and another source confirmed that Pacquiao indeed issued the memo in response to the letter of Cusi. Cusi also confirmed to Rappler that he wrote a letter to Pacquiao informing him about the national council meeting on May 31.

“You might have received vice chairman Alfonso Cusi’s letter calling for a national assembly on May 31, 2021. All concerned party mates are strongly advised to ignore the letter,” said Pacquiao.

Pacquiao said any call for a PDP-Laban national council, assembly, or meeting should be approved both by the party president as well as the party chairman, President Rodrigo Duterte.

“This is not the time for politics. Instead, let us help our country ravaged by the COVID-19 pandemic,” said Pacquiao.

Cusi first wrote to Pacquiao on May 19, informing PDP-Laban’s acting president that a national council meeting has been called on May 31.

The meeting’s agenda included “administrative matters in preparation for the 2022 national elections,” where Pacquiao is rumored to be gunning for the presidency. Pacquiao has remained coy about his plans for 2022.

Also on the May 31 meeting agenda:

Echoing Pacquiao, Munsayac told Rappler that it was still early for PDP-Laban to hold a national assembly to discuss the 2022 elections.

Asked when Pacquiao himself plans to call for the assembly, Munsayac said no definite date has been set “but best month to do the assembly is close to filing of candidacy.”

Cusi: ‘Minority’ of members against assembly

“Although a minority of our party mates are trying to discourage the participation of the members, we wish to reiterate that the assembly is part and parcel of the democratic process that every major political party should embrace,” Cusi said.

“Verily, the National Council Meeting is an important political process that we must encourage as it pertains to one of the basic tenets of PDP-Laban – consultative and participatory democracy,” he added.

Cusi said the assembly would “examine what we have accomplished and what needs to be done.”

“Again, I would like to reassure the people that our party remains united and committed to serve and accomplish the President’s socio-economic agenda,” he said.

Citing PDP-Laban’s Constitution, Lambino said only Duterte, as party chairman, has the power to convene the National Council.

“Maybe because Senator Pacquiao is new to PDP-Laban, he’s not very familiar with the provisions of the Party Constitution but anyone can verify its provisions. In fact, original copies are deposited with the Comelec and they can verify who’s telling the truth,” said Lambino.

The filing of certificates of candidacy for the 2022 elections is in October.

These developments are reminiscent of the party dynamics in 2018 to 2019, when PDP-Laban struggled for stability and survival following in-fighting among factions and the external threat from presidential daughter Sara Duterte’s Hugpong ng Pagbabago. – with reports from Camille Elemia/Rappler.com