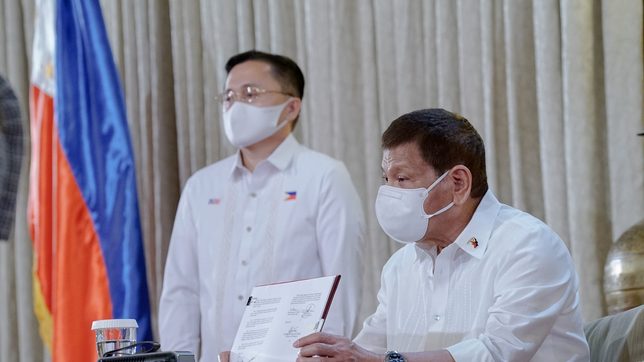 The national executive council of ruling party PDP-Laban has nominated the tandem of Senator Bong Go and President Rodrigo Duterte for the 2022 presidential elections.

The council met via Zoom on Wednesday, August 4, and adopted the resolution nominating Go as the party’s standard-bearer and his longtime boss, Duterte, as his running mate. (READ: Duterte says he’ll run for vice president to be immune from suit)

The resolution is currently being circulated for officers’ signatures. The nomination would then be officially held on September 8 during the party’s national convention.

“The NEC members unanimously voted and passed the resolution endorsing Senator Bong Go to be the party’s presidential candidate in the national convention when the party will name its candidates for president, vice president, and senators,” a high-ranking party official, who requested anonymity for lack of authority to speak with the media, told Rappler on Thursday, August 5.

Another party officer said, “He is nominated, but decision will be subjected during the national convention.”

A third source said, “Of course it will go through the process of nomination and Party Convention, but it’s a done deal.”

Go-Duterte is expected to use the slogan Tapang (bravery) at Malasakit (compassion) – the latter, a government program that Go has been aggressively pushing for in the run-up to the 2022 election.

Rappler sought Pimentel for comment but he has yet to respond. Pimentel earlier maintained that their group is the legitimate PDP-Laban and slammed outsiders trying to wrest control of the party. Despite insults hurled at him by Duterte, Pimentel said he is still an ally of the President. – Rappler.com