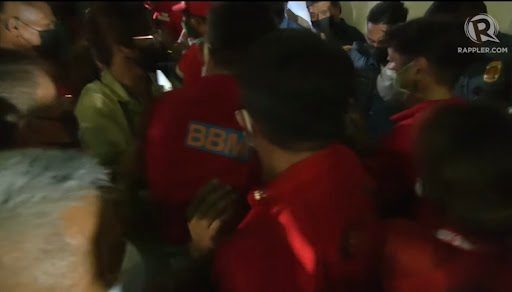 BRUTE FORCE. Marcos security personnel shield the presidential candidate from journalists wanting to interview him during the Quezon City rally on April 13, 2022.

Facebook Twitter Copy URL
Copied
Our reporter Lian Buan, who covers Marcos, was subjected to both on-the-ground and online harassment

MANILA, Philippines – Barbarism has no place in any democratic exercise such as campaign sorties of a candidate seeking the highest position of the land.

Our reporter Lian Buan, who covers Marcos, was subjected to both on-the-ground and online harassment.

In an incident recorded on video, at around 7:17 pm on April 13, Marcos security personnel surrounded and blocked Ms. Buan from approaching him for an ambush interview after the rally and after he had greeted his supporters during his campaign sortie at IBP Road, Quezon City. One of his media officers, Mendizabal, also grabbed Ms. Buan’s hand, shoved her wrist, and kept putting down her smartphone camera. At one point, as security personnel pushed her onto a scaffolding, Ms. Buan can be heard exclaiming on video, “Aray! Ang sakit!” (Ouch! It hurts!) 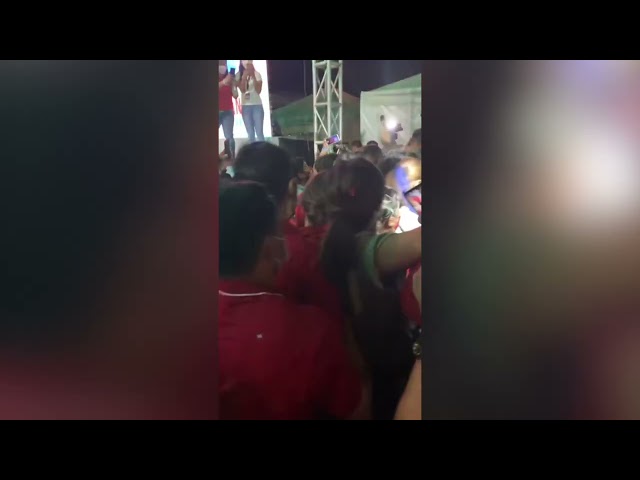 Shoving and pushing by security personnel during ambush interviews happens. But campaign staff and security personnel should know by now who the journalists regularly covering Marcos are. They pose no security threat – unless the campaign team considers questions from independent media as security threats. This kind of media censorship, which involves physical force, is unacceptable in a country that protects free speech and a free press in its Constitution.

Coincidentally, as the Marcos rally had started, Ms. Buan was subjected to online harassment as well. Just hours before the physical harassment, at 4:17 pm, Twitter user @shiningtwicexo red-tagged Ms. Buan as “one of the high-ranking officials of the CPP-NPA-NDF” due to her membership in the National Union of Journalists of the Philippines (NUJP), where she is a director. The tweet went inaccessible an hour later. Like Rappler, the NUJP has denounced the red-tagging of Ms. Buan and other journalists under the Duterte government.

Journalists cover in the toughest and roughest of situations because they need to keep the public they serve well informed. Marcos campaign spokespersons Vic Rodriguez and Benhur Abalos have not been physically present in the campaign sorties, making it doubly difficult for journalists to get official word or responses to their questions.

We call on the Marcos camp and his supporters to be more transparent, to stop harassing journalists, and to respect the media’s role in a free society. – Rappler.com