(UPDATED) RUNNING FOR MAYOR. Duterte aide Bong Go files a certificate of candidacy for his boss for the position of Davao City mayor.

Facebook Twitter Copy URL
Copied
Duterte's chief-of-staff Bong Go wears a T-shirt that says 'No is No', sending a strong message to those pressuring him to run for president. Duterte is seeking reelection as Davao mayor instead. 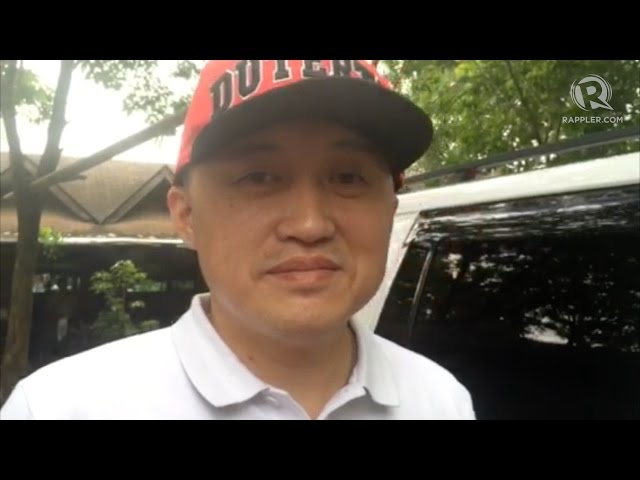 Go wore a T-shirt that said in front, “No is no” and at the back, “Sinabi ko na ayaw ko, ang titigas ng ulo ‘nyo – Rody Duterte.” (I told you I don’t want to, you are hard-headed – Rody Duterte)

Go earlier told Rappler that Duterte will not be running for president, opting instead to run again for mayor of Davao City.

Reporters in Davao found Duterte at the firing range. He said, “Look, I never talked about running when I traveled about federalism. There should never be an expectation because I never promised one.”

Go also told Rappler that Duterte flew to Puerto Princesa, Palawan on Wednesday, October 14, to escape the noise and attention generated by his Monday announcement that he is not joining the presidential race.

He reportedly stayed in Dos Palmas Island Resort with some close friends. No family member accompanied him during the trip, said Go.

The local chief executive had been certain of his intentions to run again for the same position as early as Monday.

Melchor Quitain, secretary-general of local political party Hugpong sa Tawo Lungsod told Rappler that Duterte instructed him to prepare his COC for Davao City mayor right after the explosive Monday announcement. The document was notarized by his lawyer, Samuel Dagpin.

“Like other supporters, I also feel bad but I have to respect his decision,” Quitain said.

The filing of Duterte’s COC marked the “loneliest” filing of a COC in the Davao Comelec office, said local officials.

However, the mayor’s core group of supporters still appeared to be proceeding with their plans in the Commission of Elections (Comelec) head office in Intramuros, Manila.

Some members, including former Northern Cotabato governor Manny Piñol were billeted in hotels near Intramuros coordinating demonstrations of support in case Duterte decided to file his certificate of candidacy for president.

As early as 7 am, some supporters were already outside Comelec with pro-Duterte banners and T-shirts.

Some even had their hair shaved off on the spot as others shouted “Duterte! Duterte!”

Seaman and Davao City native Melvin Salupan said he missed work today to catch what promised to be a historic event.

They had been “told by their leaders” that Duterte would show up at 3 pm.