‘I don’t feel them’: Filipino activists at COP26 decry lack of engagement by Philippine delegation 'NO ENGAGEMENT.' Filipino climate activists say they were snubbed by the Philippine delegation while at COP26 in Glasgow.

Filipino climate activists who attended the historic United Nations climate summit in Glasgow were disappointed that the Philippine delegation refused to formally engage with them even once during the two-week conference.

Marinel Ubaldo, a Super Typhoon Haiyan survivor and youth activist, was invited to meetings with Scotland First Minister Nicola Sturgeon and United States senators Ed Markey and Jeff Merkley. But her own government snubbed her organization’s invitatations to meet.

“I don’t feel them,” she told Rappler on November 8, when asked to assess the Philippine delegation’s engagement with other Filipinos at COP26.

Ubaldo met with First Minister of Scotland Nicola Sturgeon on November 10. Along with other youth climate activists, she met with the US senators on November 6. She was also invited to speak at several summit side events, some organized by the United Nations itself. In contrast, the delegation, led by Finance Secretary Sonny Dominguez, did not even respond to invitations sent by her organization, Aksyon Klima.

The delegation did not hold a single press conference during the summit even if a Department of Finance press release sent days before the conference promised “regular press briefings.”

An October 28 letter sent by Aksyon Klima to Dominguez asking for a meeting was left unanswered.

When Filipino reporters approached Dominguez for comment after he delivered a speech at a high-level meeting on November 9, he kept silent.

In a tweet, Dominguez sought to explain his silence by saying he was running late for a meeting with UK Minister of Asia Amanda Milling.

“We don’t want to be impolite. And besides, we already issued 15 press releases,” he said.

Requests for interviews sent in by reporters days before COP26 were also not responded to by Dominguez or his staff.

The only open engagement from the Philippine delegation with civil society groups was the attendance of Energy Undersecretary Felix William Fuentebella and environment department bureau director Albert Magalang to a mass commemorating Typhoon Haiyan’s anniversary.

The two were members of the delegation. The mass was organized by Aksyon Klima and Living Laudato Si.

Galicha expressed appreciation that some members of the delegation informally engaged with NGOs. He also expressed “relief” that Filipino advisers played key roles in COP26 negotiations.

One of these was lawyer Vicente Yu, who served as lead negotiator of a huge bloc of developing countries, including the Philippines, in talks on loss and damage. 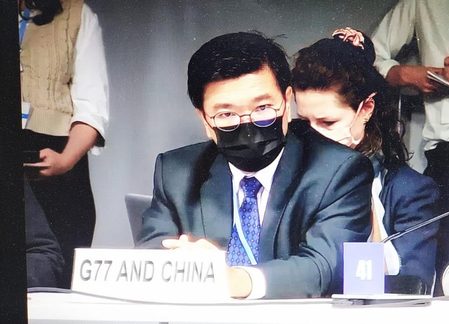 Ubaldo, who survived Haiyan at 16 years old and has attended three UN climate summits as an activist, said the lack of interaction with the government delegation is a big loss to Filipinos and to transparency.

“I was expecting that they will try to meet the Filipino CSOs who are here today speaking at side events or sharing their stories and make sure the demands of the communities and youth sector and marginalized sector will be put in place when they negotiate inside the plenary,” she said.

It was not always this way. In the 2015 UN climate summit in Paris, the Philippine delegation and its advisers interacted with NGOs present and consistently entertained media queries and interview requests.

Some members of the media and CSOs were occasionally even able to listen in on huddles of delegation members.

Engaging with CSOs could also have been a way for the Philippine delegation to better prepare itself for complex climate negoations since many CSOs have been attending the summits for years and would have “institutional memory” and “technical knowledge.”

Only two members of the Philippine delegation, Magalang and Philippine Permanent Mission to UN in New York Representative Leila Lora-Santos, had previous negotiating experience. Another official with such experience, Jerome Ilagan of the Climate Change Commission, was supposed to be part of the delegation but was taken out for unknown reasons.

“Without NGOs, the government would be severely handicapped, especially in the face of well-prepared and well-resourced delegations from the global North,” said Saño.

Philippine negotiators contributed to discussions on loss and damage while Dominguez consistently called for climate finance and climate justice in his speeches. Rappler summarized what the delegation did at COP26 in this article.