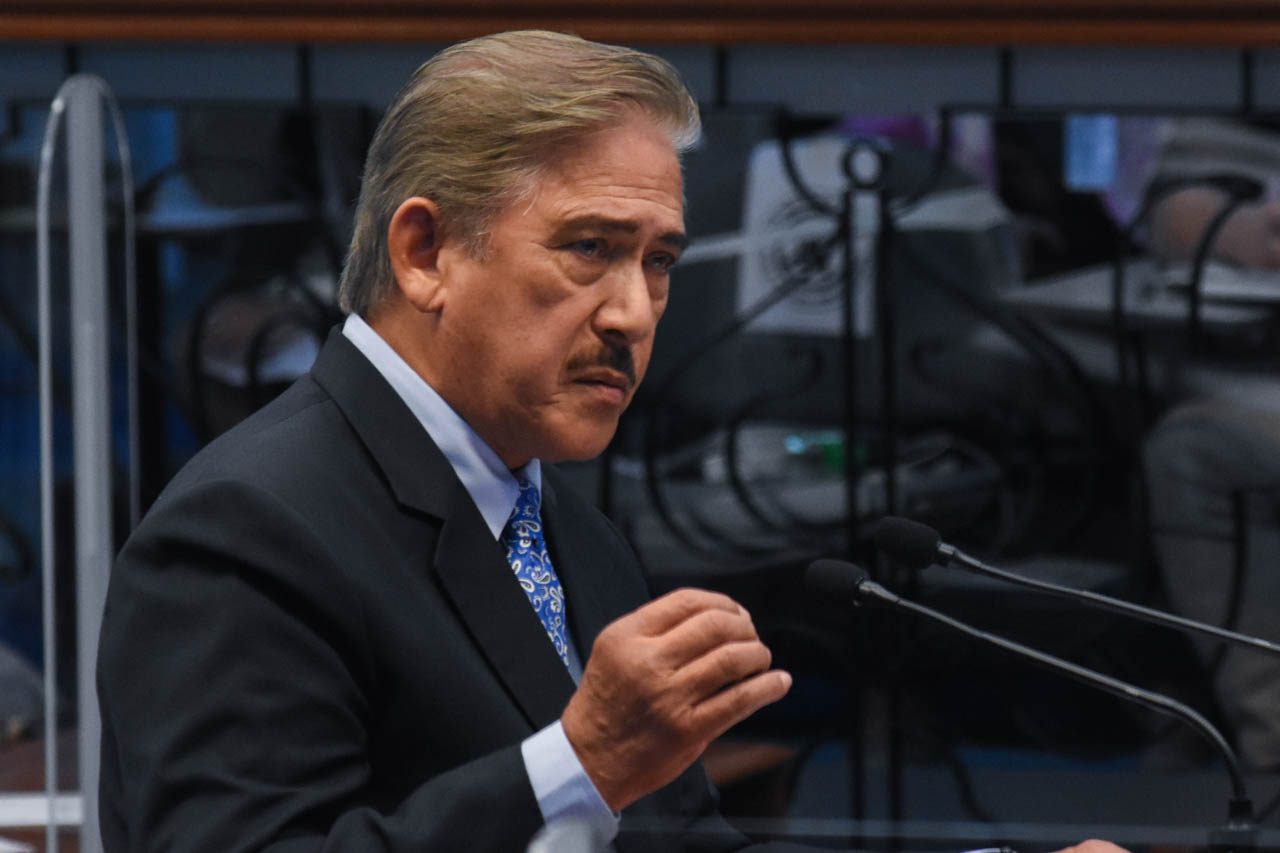 MANILA, Philippines – Outgoing senators – those whose two consecutive terms in office have ended and those who lost their electoral bids – delivered their “graduation” or valedictory speeches on Wednesday, June 1, the final session day of the 18th Congress.

It was a sentimental day for Senator Vicente Sotto III, who banged the gavel for the last time as Senate president under the 18th Congress. He served under nine Senate presidents before becoming the leader of the chamber himself starting 2018.

A comedian and musician before his first foray into politics as Quezon City vice mayor in 1988, the 73-year-old Sotto ran but lost in the 2022 vice presidential race. He is now set to retire from politics.

Below is the full text of Sotto’s speech. 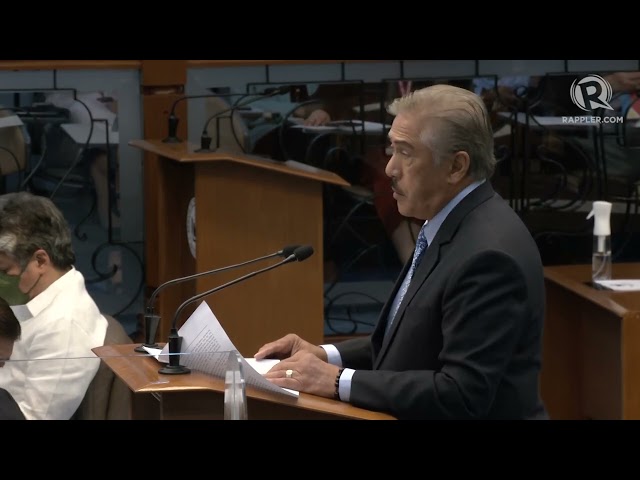 I praise and thank the Lord our God for the many graces He has given me all these years. I praise and thank Him for the mission and path that He has led me to undertake from the time I became Vice Mayor of Quezon City up to being an elected senator of the Republic. And I am particularly grateful to the Lord for the distinguished ladies and gentlemen that I have the privilege to associate myself, and work, with from 1988 up to the present. Each of them has positively contributed to my tremendously worthwhile journey called public service.

Today, June 1, 2022, masquerades like any other day, though its component units are made up of the same number of minutes and hours. The reality is very different, however.  “Sine die” is a Latin term which literally translates to “without day.”  This refers to the legislative practice of stopping the clock a little before midnight so as to create the legal fiction that all transactions were done within the reglementary period, and not a minute later which would make them void.

The primary thoughts occupying my mind are those of lawmaking and leaving – two ideas that intersect at this very moment.

Each institution, family, and person have a story to tell. They all have beginnings, and endings, and in-betweens. Our Senate as the other half of the Congress of the Philippines began to exist in 1916, such that not many years ago we celebrated our centenary. By the way, there is only one family name that existed in the 1916 Senate and the 2016 Senate: Sotto, my grand uncle Filemon Sotto in 1916 and yours truly, Vicente Sotto, in 2016. The first Senate President was the late great President of the Commonwealth Manuel Luis Quezon, who so dominated the political era and is today remembered as a province and a city, that his memory never fades from our people’s consciousness. He was followed by more than 20 others whose names evoke memories of political astuteness, brilliance of mind and urbanity of behavior. I do not claim nor aspire for the same accolades. It is enough for me to have been your friend these many years, a builder of consensus if arguments stand in the way, a harmonizer should there be discordant notes. I had the rare chance of having been mentored by the Senate Presidents who served before me.

On the aspect of lawmaking, to be precise, we have passed laws that offered relief to ease the effects of COVID-19 on Filipinos.

Throughout the critical days of graded lockdown, your Senate was able to enact the annual budget on time.

During this pandemic, hospital occupancy literally spilled onto driveways and parking lots.  It seemed like the dark hours would never end.

Fortunately, we are mostly over that hump. Thanks to the government’s vigorous vaccination campaign as mandated by the COVID-19 Vaccination Program Act of 2021.

Our public health recovery can also be traced to the heroic efforts of all medical frontliners. They stayed the course despite the apparent danger to their health.

We are also thankful for the cooperation of the enlightened citizenry. Despite experiencing initial difficulties, they trusted their government. More so, they complied as best as they can with quarantine and medical protocols.

Together with our people, we mourn and honor the memory of those we have lost. And as a nation, we look forward to the challenge of the future.

The closing of the Senate sessions today looks towards that future. We are continually learning to live with the COVID virus. And finding ways to respond to our people’s need through legislation.

We are hopeful that the Senate’s work will, in time, contribute to regaining the nation’s spiritual vigor, political durability, and economic stability.

As we count down the last hours of the 18th Congress, permit me to submit and encapsulate the gains of the 3rd Regular Session, together with the laws that yours truly has principally authored and sponsored all the way through the 9th Congress, as an annex to this valedictory address.

On the matter of leaving, we Filipinos turn sentimental. Rizal wrote a long poem as he contemplated his execution. Our OFWs have tear jerking scenes that rival movies in heart-rending last-minute tears and hugs.

We here are less prone to these expressions, but the sweet-sorrow of parting is real. We have come to love the Senate, its members, the secretariat, and the plain serenity of being at its premises. It will always have a special place in my heart.

Our dear Filipinos, it is with fervent hope that the laws passed under this 18th Congress will make a difference in the lives of our fellow Filipinos.

As the 18th Congress comes to a close, so shall my term as senator.

I look back on that day in 1992 when I was first elected into office. I remember entering the old Senate building, which is now a national museum, as a neophyte senator.

I have been in public service for decades already. My journey has been long and arduous, but it had its shining moments. My years at the Senate – as Senate President and as a regular senator – are the highlights of my career as a public servant. I can and I will show off my legislative accomplishments not only to my grandkids but to the younger generations, proud and guilt-free that I have not abused my position to enrich myself or any member of my family. I have kept my credibility intact and my name, unsullied.

In my years in the Senate, I had the good fortune of learning from the best minds in the country. In turn, I earned the respect of my colleagues. And I became – as you may recall – the Minority Leader and Majority Leader.

Today, it is with a sense of gratitude that I close the 18th Congress as the Senate President – a distinction given by my esteemed colleagues. I hope that I have not been a disappointment.

As everyone knows, I was first a musician before being a politician. For this reason, some sectors may have misjudged my capacity as a public servant.

But what I learned in my 24 years in the Senate is that an artist and a politician are not very different from each other. Permit me to tell you why.

Like a musician, the politician must first have a dream. And in that dream, he must create music that will inspire people to sing.

Second, a musician, like the politician must have a sense of rhythm. Both of them must be able to discern the tempo of the times. Both must know the pulse of the people.

And finally, both the musician and politician must understand that their work becomes meaningful only when it redounds to the common good. I understand that music or legislation must not only be for the few. It must benefit all.

I share the honor of my work in the Senate to all the senators who have preceded us, as much as I now bow in respect to all the Senators in the 18th Congress.

To my colleagues who have supported me from the beginning, I thank you. I shall treasure your friendship and commitment of cooperation. I extol the hard work that you have put into your individual committees. I will forever admire your integrity and nationalism.

I am also indebted to each one of the officers and employees of the Senate secretariat, headed by Atty. Myra Marie Villarica, who made sure that the legislative wheels kept turning.

To the journalists covering the Senate, I give you my thanks. As members of the press, you have a vital role in maintaining transparency and accountability in government. As our bridge to and from the public, your work is always appreciated.

I am and will always be grateful to the millions of Filipinos who have given me their trust and confidence. Salamat sa tiwala at kumpiyansa.

Today, as I stand before my colleagues and the Filipino people on my last day as Senate President, I have one final and earnest appeal to the incoming 19th Congress: Maintain the integrity and independence of the Senate. Huwag ninyong payagan na mabahiran ng politika ang inyong serbisyo sa taumbayan. Ingatan ‘nyo ang respetong ibinibigay ng bawat Pilipino sa Senado at sa mga miyembro nito.

When the time comes that my humble name will have to be ensconced and chiseled into the annals of the Senate’s history, I want to be remembered best as Vicente C. Sotto III, a musician by profession, a sportsman by affiliation, a drug-buster by vocation, and a public servant by conviction.