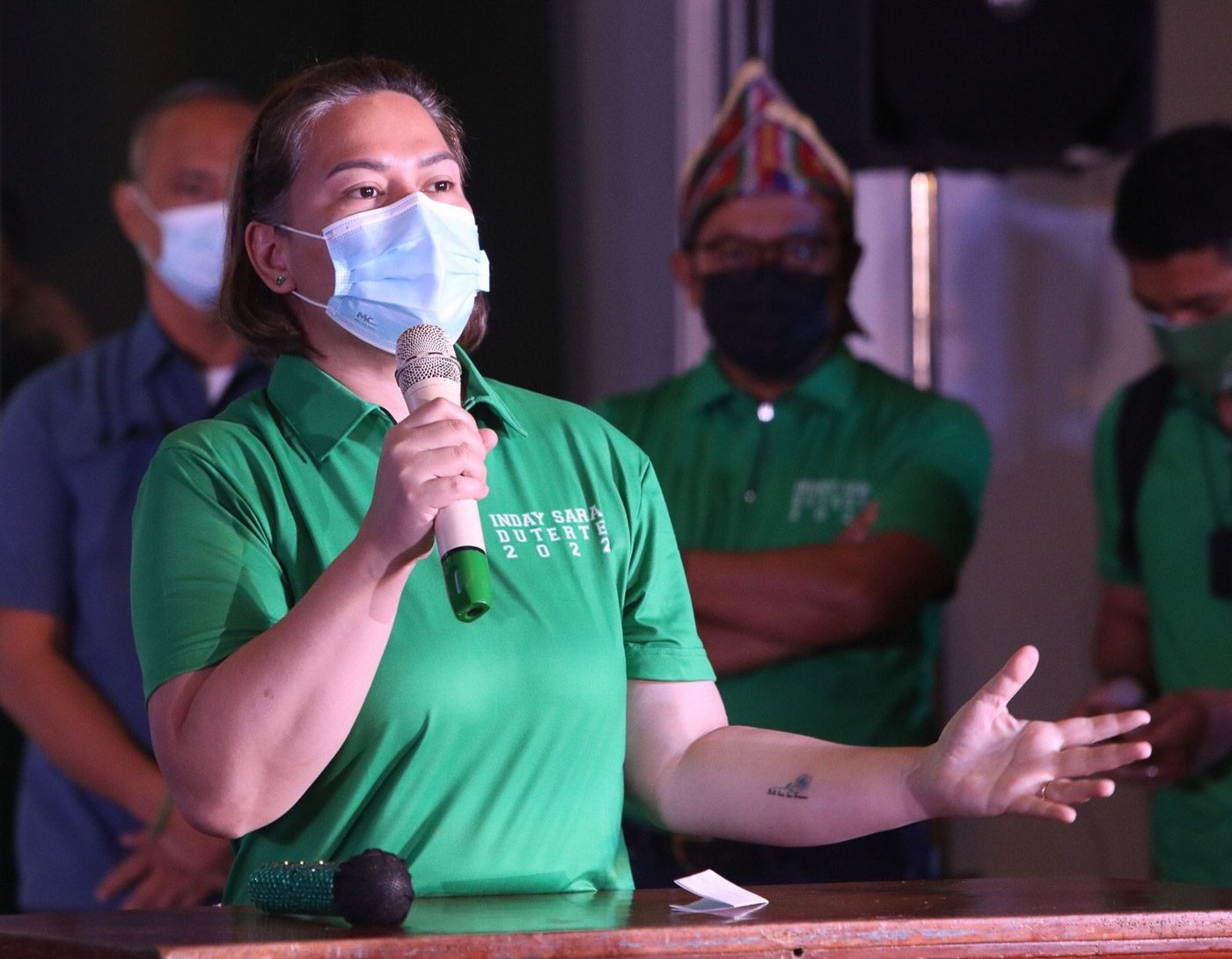 Facebook Twitter Copy URL
Copied
'The issue of patriotism is not simply learned by marching on the ground and carrying a rifle,' says Save Our Schools Network

“Vice presidential candidate Mayor Sara Duterte really showed her true militarist nature to the voting public when she offered he proposal that the youth undergo mandatory military service if ever she gets elected,” said Save Our Schools Network in a statement on Thursday, January 21.

Save Our Schools Network is an alliance of academic, religious, and civil groups advocating for the resumption of Lumad education.

The group said that Sara’s proposal is “totally detached and debased from the basic need of the youth, which is education and proper jobs, things that have been heavily affected by her father’s militaristic pandemic failure.”

It can be recalled that her father, President Rodrigo Duterte, also made a bid to make Reserve Officers’ Training Corps (ROTC) mandatory for all college students early in his presidency, but this plan fizzled out. ROTC is a voluntary college program designed to produce military reservists.

The younger Duterte, however, has gone several steps further by seeking mandatory military service for Filipinos once they reach the age of 18.

“Hindi po ROTC lang…. Dapat po, pagtungtong mo ng (Not just ROTC. When you turn) 18 years old, you’ll be given a subsidy, you’ll be asked to serve our country, doon sa (there at the) AFP,” Sara said on Wednesday, January 19, during a “virtual caravan” that featured her running mate Bongbong Marcos Jr and several senatorial candidates endorsed by the tandem.

Save Our Schools Network pointed out that the “issue of discipline cannot be answered by submitting our youth to a militarist training that is known to abuse and murder its own cadets through hazing and is known for human rights abuses which we have experienced.”

“The issue of patriotism is not simply learned by marching on the ground and carrying a rifle. Patriotism is already provided by schools, especially our Lumad schools that taught us to defend of our ancestral land and environment.  But sadly our Lumad schools are shut down, and our ancestral land have been plundered no thanks to her father president who reopened our lands to large-scale mining, plantations and the Chinese military and multinational firms,” the group said.

In a separate statement on Friday, January 21, youth group Samahan ng Progresibong Kabataan said that any candidate running for public office who continue to support and promote militarism should “only be assumed as brutal, oppressive, and in service of only the ruling class.”

“There is something to be said about how, instead of addressing the issues facing everyday Filipinos, Duterte seems hellbent on just adding to them. Proposing mandatory military service does nothing to address the surge in COVID-19 cases, rampant corruption in the health sector, and the crippling lack of social aid; in fact, such a proposal would only further divert crucial funding from these issues,” the group said.

The group added that Sara’s push for mandatory military service sends a strong message that “any dissent will be met with force.” “The youth must work to overthrow the oppressive status quo, but candidates like Duterte and Marcos do everything in their power to preserve it,” the group said.

On Thursday, Defense Secretary Delfin Lorenzana said that Sara’s suggestion, while welcome, would be hard to implement. Besides, he added, the country is not on “war footing.” – Rappler.com