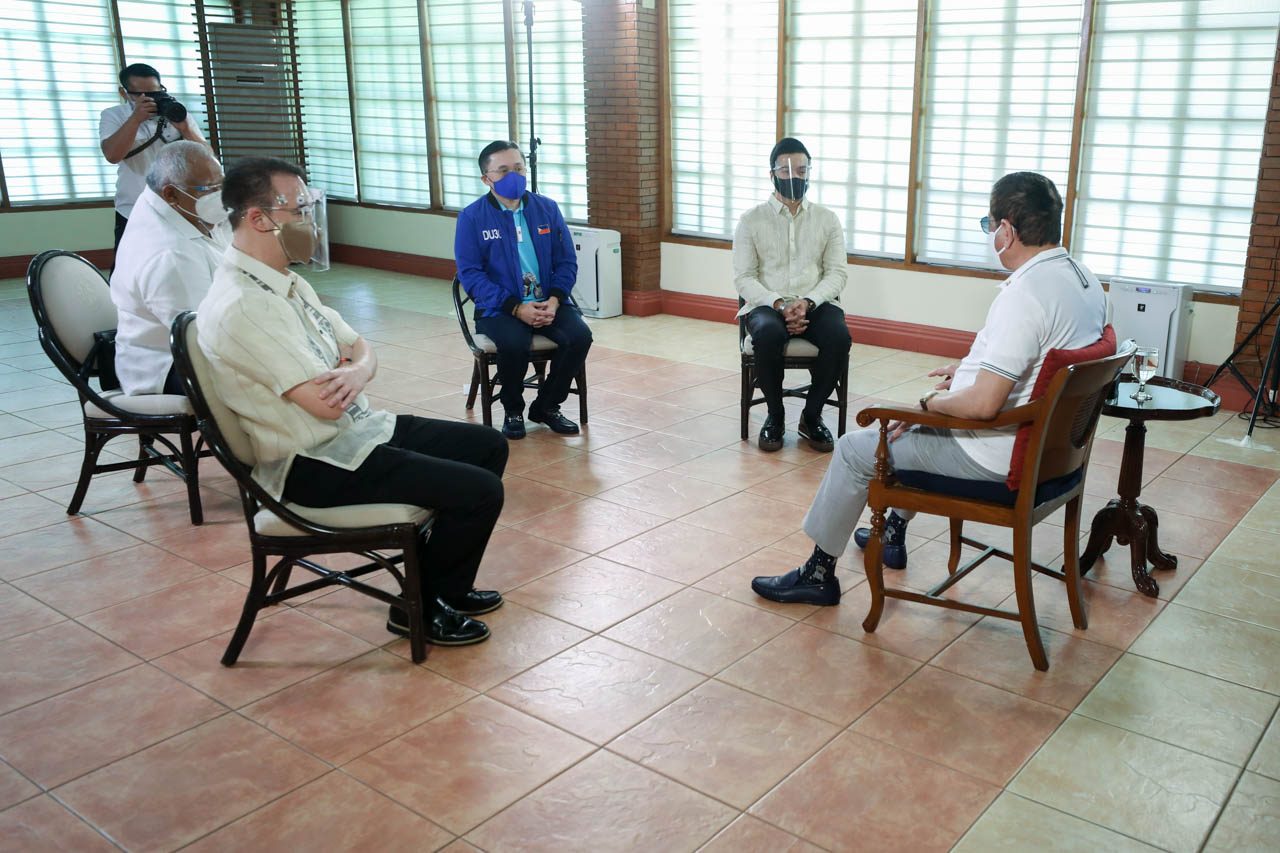 President Rodrigo Duterte meets with Congressman Alan Peter Cayetano and newly-installed House Speaker Lord Allan Velasco to discuss the issues that propelled the House of Representatives into the limelight earlier this week. Also present in the meeting held at the Malacañang Golf (MALAGO), Malacañang Park, Manila on October 13, 2020 are Executive Secretary Salvador Medialdea and Senator Christopher "Bong" Go, who said that both parties have agreed to work together and pass the 2021 national budget on time. SIMEON CELI/ PRESIDENTIAL PHOTO

When the just-ousted Taguig-Pateros congressman Alan Peter Cayetano faced President Rodrigo Duterte on Tuesday afternoon, October 13, he apologized to the Chief Executive for “misunderstanding” his directives on the speakership term-sharing deal.

Presidential Spokesman Harry Roque said this was part of what transpired during Duterte’s meeting with Cayetano and his victorious rival House Speaker Lord Allan Velasco at the Malacañang Golf Clubhouse.

“Congressman Cayetano apologized to the President. He apparently misunderstood the mandate of the President. He thought that the term-sharing agreement would be effective after the passage of the budget,” Roque said in a CNN Philippines interview on Wednesday, October 14.

“Of course, a father would accept an apology from the son and all is well that ends well,” said Roque, who was not present at the meeting, citing information from Senator Bong Go.

Prior to Velasco’s successful coup, Cayetano had justified his continued speakership by saying Duterte wanted a change in House leadership in December, after Congress had passed the 2021 national budget.

But Velasco had insisted on becoming Speaker on October 14, fulfilling the arrangement Duterte had brokered between the two lawmakers – that Cayetano would be speaker for 15 months and Velasco for the next 21 months.

Duterte had no plans to intervene when Cayetano managed to get a majority of lawmakers to reject his resignation offer.

But when Velasco said he would still seek the speakership by October 14, Cayetano lost no time in suspending the House session on October 6, effectively robbing Velasco the chance to get elected as speaker.

The move also raised concerns about the timely passage of the 2021 budget, which was Duterte’s red line. Hearing the concerns of senators that Cayetano’s actions gave them little time to pass the budget before year-end, an angry Duterte called for a special session from October 13 to 16.

Apart from forcing the House to continue budget deliberations, it also gave Velasco a chance to be formally named Speaker.

With Cayetano admitting defeat and Velasco getting his part of the deal, Duterte is convinced that politics will no longer get in the way of the budget.

“The President was, of course, very appreciative of the cooperation between both parties and he appreciated the fact that Congress is now focusing on the budget because that has been his call from the very beginning: to pass the 2021 budget,” said Roque. – Rappler.com