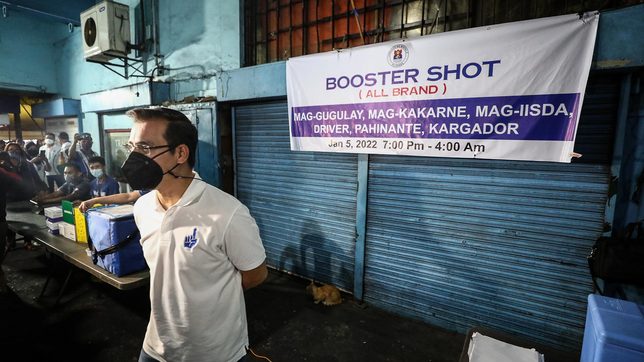 FRONTLINES. Manila Mayor Isko Moreno watches over the administration of booster shots among the city's vendors and drivers on January 5, 2022. Rappler

MANILA, Philippines – Manila Mayor and presidential aspirant Isko Moreno said on Thursday, January 6, that COVID-19 medicines stocked by Manila City Hall can be used even by non-residents, as long as they present a doctor’s prescription. The city’s drive-through swab testing is also open to non-residents free of charge.

“Yes. Manila has had an open policy since the beginning,” he told Rappler on Thursday, January 6, when asked if non-Manila residents can avail of the free COVID-19 medicine and tests offered by the Manila city government.

Earlier that day, his staff sent a press release about how Filipinos can avail of the city’s stocks of anti-COVID-19 drugs like remdesivir, tocilizumab, baricitinib, and molnupiravir. Manila was one of the first entities in the Philippines to receive molnupiravir pills, aside from the office of Vice President Leni Robredo.

(To our countrymen looking for medicines, you are welcome in Manila. What’s important is the lives of people, to save people, whoever they may be.)

As of January 3, Manila had 42,000 molnupiravir tablets and more than 1,000 tocilizumab tablets. Molnupiravir is supposed to prevent the progression of mild or moderate symptoms to severe while tocilizumab aims to prevent deaths in severe cases. In November 2021, the city received 6,600 tablets of baricitinib, medication intended for patients with moderate to severe symptoms.

Those who wish to avail of tocilizumab need to submit a COVID-19 positive test result, doctor’s prescription, medical abstract, and contact number.

Moreno is also offering to non-Manileños the use of the city’s free swab testing services. They are available in the following medical facilities:

Those seeking more information about the free testing can contact these numbers:

Dr. John Wong, a medical expert advising the national government, has told President Rodrigo Duterte about the need to make antigen testing more accessible and affordable to the public, amid the surge in COVID-19 infections linked to holiday activities and the entry of the Omicron variant. – Rappler.com