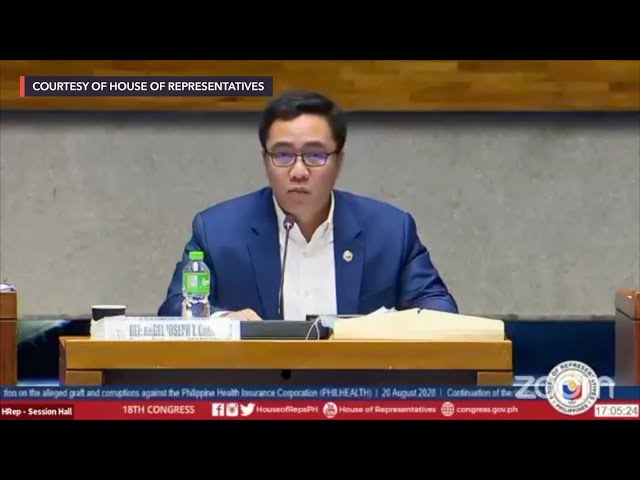 Facebook Twitter Copy URL
Copied
Lawyer turned lawmaker Argel Cabatbat shares what he uncovered about the alleged scam of Dr Mark Dennis Menguita, who once had his medical license revoked because of a case Cabatbat filed

The corruption in the Philippine Health Insurance Corporation (PhilHealth) goes all the way down to the regional level – and Ang Magsasaka Representative Argel Cabatbat has personal knowledge of the matter, one that almost cost him his life.

On Thursday, August 20, Cabatbat narrated during the House’s resumption of its investigation on PhilHealth the alleged scam that neurologist Dr Mark Dennis Menguita has been running in Koronadal, the capital of South Cotabato province.

Menguita was said to have colluded with the staff of the 4 hospitals he works at to charge bogus medical bills to PhilHealth members.

According to Cabatbat, Menguita employed “recruiters” who would invite PhilHealth members in Koronadal City to join his wellness program, where the patients would be required to sleep overnight at a hospital.

Menguita would then misdiagnose his patients by indicating that they supposedly have severe illnesses – even if they are just experiencing mild ailments – just so he could get bigger insurance claims from PhilHealth.

(He would manipulate the diagnosis of his patients. His staff, even his own secretary, already testified against him and yet the administrative case filed against him was dismissed.)

Cabatbat pointed out that PhilHealth’s own records showed that from 2014 to 2018, Menguita’s claims for inflammatory disease of the central nervous system already spiked by as much as 15,566.67%.

A similar trend can be seen for other diseases Menguita supposedly treated, yet Cabatbat said the PhilHealth regional and central offices did not raise any red flags against the doctor at the time.

(Normally when your practice is good, the claims may increase by 10%, 20%. But won’t this kind of increase already merit a report to the World Health Organization as if there’s already a pandemic in that region?)

PhilHealth and the Soccsksargen office of the National Bureau of Investigation started their own investigations only when Cabatbat provided them with the necessary documents and potential leads.

The neophyte congressman, however, admitted he has yet to identify who seems to be Menguita’s “protector” in the PhilHealth central office.

But one thing is clear, he said.

(Unfortunately, Mr Chair, we can’t link yet who really is his protector. But from what we know and from what I’ve gathered, Mr Chair, there is rampant corruption in the regional level.)

PhilHealth filed 21 cases of fraud against Menguita only in January 2019 and the case remains pending.

Menguita, however, was not invited to the hearing and was therefore not able to respond to Cabatbat’s allegations.

How does Cabatbat know this?

The lawyer turned lawmaker was able to dig up information about Menguita because he had sought to revoke the doctor’s license around 4 years ago.

Cabatbat used the bigamy case filed against Menguita by the late barista Dan Joseph Alas to seek the revocation of the neurologist’s license.

In September 2016, Menguita’s medical license was revoked by the Professional Regulation Commission Board of Medicine for immoral and/or  dishonorable conduct. But he was still able to practice after making an appeal.

Cabatbat said that the embattled doctor hired 3 hitmen to shoot and kill Alas in a coffee shop on December 19, 2017. Alas was just 26 years old at the time.

But the lawyer and his friend “Jon-Jon “were able to retaliate, shooting and killing one of the suspects, Mark Ayeras, who turned out to be a policeman on leave.

Another suspect identified as John Paul Napoles was injured after Cabatbat’s vehicle rammed into his motorycle. The 3rd suspect was not caught that night.

Cabatbat believes Menguita was the mastermind, as the 3 gunmen who went after him were supposedly the same hitmen who killed Alas. (READ: Ambushed lawyer links attempted murder to unsolved killing in 2017)

He then claimed that the money Menguita used to hire the hitmen came from money he earned in the PhilHealth scandal.

(Mr Chair, to the PhilHealth officials listening here, if you think that your only sin is to steal money from the contributors of PhilHealth, you are wrong. Because that money was also used to kill Dan Joseph Alas and to ambush me.)

Cabatbat then appealed to the Philippine National Police to protect the new batch of whistleblowers revealing the latest corruption scandals faced by PhilHealth – the controversial Interim Reimbursement Mechanism, the overbloating of its ICT budget, and the overpayments in PhilHealth’s all case rate system. – Rappler.com