Velasco and allies told: Resign from House posts if you can’t cooperate with Cayetano 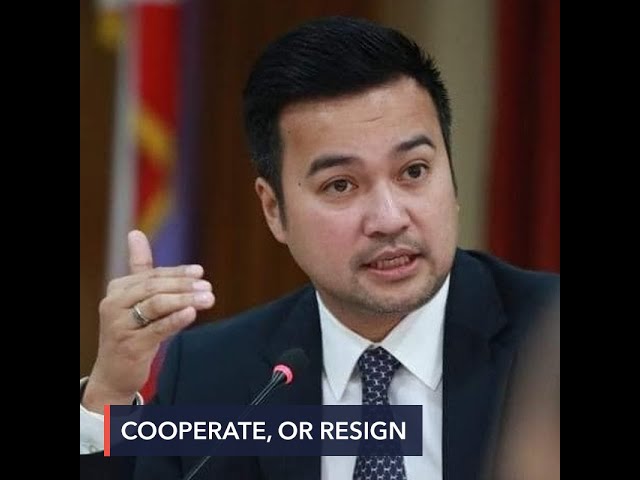 Allies of Speaker Alan Peter Cayetano said Marinduque Representative Lord Allan Velasco and his bloc should resign from their House posts if they can’t work with the incumbent Speaker.

Capiz 2nd District Representative Fredenil Castro posed this challenge during a privilege speech on Friday, October 2. A week earlier, Castro manifested his support for Cayetano and said the coronavirus pandemic is no time to change leaders in the House.

Castro cited Cayetano’s call for the chamber to pass on time the proposed P4.5-trillion budget for 2021, following the power struggle that gripped the chamber for weeks.

“Dahil mahilig din naman sila manawagan sa palabra de honor, panindigan nila ito (Because they’re fond of invoking the word of honor, they should stand by this themselves). Resign your leadership positions and let those who are willing to help and cooperate take over,” Castro said.

“There is no shame in admitting defeat at the hands of the better foe. But it is not fitting to pretend to be part of the team while betraying your colleagues and undermining the efforts of Congress,” he added.

(Yes, if Speaker Cayetano himself offered to resign his officer position to honor the term-sharing, then those in the majority who no longer believe in him should also offer to resign so they will be true to themselves.)

Other leadership positions were also given to members of the ruling PDP-Laban, Velasco’s party.

Cayetano had offered to resign as Speaker after President Rodrigo Duterte himself told the incumbent Speaker and Velasco that their term-sharing deal should be honored.

Under the agreement green-lighted by Duterte, Cayetano is to serve as Speaker for the first 15 months of the 18th Congress, then Velasco is to take over in the 21 months after that.

But the House resoundingly refused to accept Cayetano’s resignation, with 184 legislators voting to keep him as their Speaker.

The President then met with his allies Cayetano and Velasco on Tuesday, September 29, to finally settle the term-sharing question. But both parties gave conflicting statements on when exactly the turnover would happen.

In the face of another impasse, Cayetano offered to step down as House leader, only for his colleagues to refuse it.

The rejection of his resignation is proof that the Speaker still has control over the majority of the House. Political analysts believe keeping the speakership is crucial for Cayetano if he has any plans of running for president in 2022. (READ: In House power play, Speaker Cayetano’s Palace dreams are at stake)

Velasco already accused his rival of resorting to “political maneuverings and theatrics” to cling to power.

But on Friday, Castro taunted Velasco and said he never had the numbers in the House to begin with.

(You didn’t even have the numbers back when the President’s position wasn’t clear. What more now when it’s as clear as day that the President is happy the chaos over the House leadership is now over?)

Fresh from another victory at the Batasang Pambansa, Cayetano went back to Malacañang on Wednesday evening to meet with Duterte.

Villanueva, founder of the Jesus Is Lord church, supposedly arranged the meeting over two weeks ago so he could “pray over” Duterte.

Still, the speakership saga was brought up. The President reiterated he will now stay out of the internal affairs of the House.

Cayetano, who was Duterte’s running mate in the 2016 elections, then reaffirmed his support for the President.

“And just as he has put his faith in the leadership of the House to do the right thing – na gawin ang tama (to do the right thing) – we also reaffirm our support for the President and his vision for a free, strong, and prosperous Philippines,” Cayetano said in a Facebook post.

Cayetano hopes the House will now be able to move on the power showdown in the House so they can pass the budget before Congress takes a break in two weeks.

“Because of all that has happened, some of our fellow citizens are saying that the country deserves better from this House of the People. That we must not put partisan interests before the public welfare – and I agree with them. I’m sure many of you do too,” Cayetano said.

“If there was some other way, a less divisive and political way, to do this – I would do it. But for now, let us resolve to move past this as quickly as possible, fix what has been broken, and show the country that we are worthy of their continued high regard,” he added.

Plenary deliberations on the 2021 budget were delayed by a day-and-a-half in the wake of Cayetano’s resignation. Discussions resumed only on Friday morning. – Rappler.com