BIKOY. Peter Joemel Advincula alias Bikoy appears at a press conference in Camp Crame on May 23, 2019, where he turned the tables on the political opposition.

Facebook Twitter Copy URL
Copied
Peter Joemel Advincula alias Bikoy does not show up to his arraignment in Manila, prompting the court to issue an arrest warrant with double the amount of bail

The Manila Metropolitan Trial Court (MeTC) Branch 17 has issued a new warrant of arrest against Peter Joemel Advincula alias Bikoy, after Advincula snubbed his arraignment over the perjury charge filed by the Free Legal Assistance Group (FLAG) in the Oust Duterte plot case.

“In view of the failure of the accused to appear in today’s hearing despite notice and upon motions of both the private and public prosecutor, let the cash bail posted by Peter Joemel Advincula be forfeited and confiscated in favor of the government. Issue a warrant of arrest against him with bail set at double the amount of the previous bail posted by the accused,” Branch 17 Judge Karla Funtila-Abugan said in an order on Wednesday, July 21.

Advincula was supposed to be arraigned in court on Wednesday for the perjury case filed against him by FLAG lawyers Chel Diokno, Ted Te, and Erin Tañada. This was in connection to the inciting to sedition case filed by the Philippine police against members of the opposition for allegedly using Bikoy and his infamous “Ang Totoong Narcolist” videos in a plot to oust President Rodrigo Duterte.

In that sedition case, the Department of Justice (DOJ) cleared most of the respondents, including Vice President Leni Robredo, the FLAG lawyers, bishops, and others, but proceeded to file conspiracy to commit sedition charges against Advincula, opposition leader Antonio Trillanes IV, priests Flaviano Villanueva, SVD and Albert Alejo, SJ, and seven others. Their trial is ongoing at the Quezon City MeTC. The new schedule for arraignment is on August 26.

The DOJ charged Advincula for perjury for failure to prove the lawyers’ involvement in the so-called Project Sodoma, a sensational narrative of the political opposition supposedly coaxing him to publish damaging videos against the president.

Advincula alleged in his videos Duterte’s involvement in the drug trade, but he used a flip-flopping narrative he had previously used in the Aquino administration, tweaking details for his convenience. Advincula was then presented by the police in Camp Crame, where he switched sides and accused the political opposition of being behind the videos.

It was the police’s Criminal Investigation and Detection Group (CIDG) which filed the sedition complaint against the opposition, using Advincula as witness and then respondent.

In the perjury case, the DOJ cleared Police Lieutenant Colonel Arnold Thomas Ibay, the officer-in-charge of the CIDG’s Regional Field unit-National Capital Region, who signed the inciting to sedition complaint.

Diokno and Tañada previously ran as senators in the opposition slate Otso Diretso in the 2019 midterm elections. 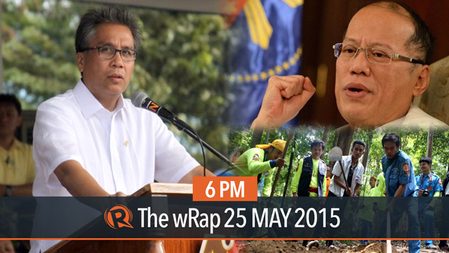