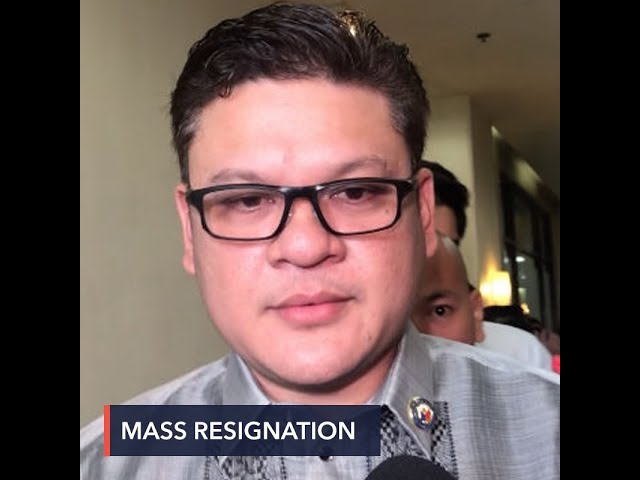 Seven congressional staff members of House Deputy Speaker Paolo Duterte tendered their “irrevocable” resignation after a lawmaker allied with the presidential son asked his chief of staff to resign.

On Thursday, August 27, ACT-CIS Representative Eric Yap confirmed to Rappler that 7 employees of his close ally Duterte had resigned from their posts after Yap asked chief of staff Sherwin Prose Castañeda to leave his post due to alleged “lapses.”

Duterte himself later issued a statement confirming the mass resignation from his office.

“For the details on why they resigned I think it would be best if Atty. Castañeda should answer that question because for me tapos na ang lahat and we parted ways na maayos (the issue is already over and we properly parted ways),” said the Davao City 1st District congressman.

It was Yap who had recommended Castañeda to be hired by the presidential son. When Castañeda resigned, 6 other staff members whom he hired followed suit.

“Ako kasi nag-endorse, ako nagpasok… Ako nagpakilala [kay Duterte]. So may mga lapses kasi while nasa Davao si Cong Pulong because of the lockdown. May mga lapses so I asked him to resign na lang,” Yap said in a phone interview.

Yap no longer elaborated when asked further to explain what Castañeda’s alleged lapses were.

(It would be unfair to Sherwin if I say more. They were just minor lapses. But I have a one-strike policy.)

In their letter to Duterte dated August 10 – a copy of which Rappler obtained – the 7 staff members said their resignation was to take effect on August 15.

“We thank you for the opportunity given to us to work in your office,” they said.

Rappler already reached out Castañeda for comment, but he did not answer Rappler’s phone call and has not replied to our other Viber messages as of posting.

The mass resignation at Duterte’s office comes at a crucial time, since the House is set to begin scrutinizing the proposed P4.5-trillion budget for 2021 – a process that requires thorough staff work.

Duterte, however, is already in the process of filling up the vacant positions with assistance from Yap.

He plans to bring in some of his “trusted” staff from his district office in Davao City to help run his office at the Batasang Pambansa.

“I’m almost done filling up the vacant positions with the help of congressman Yap’s staff. Hoping for a smooth transition and a more effective office for the constituents of the first District of Davao City,” he said.

Duterte and Yap are known close allies, often co-authoring several measures in the lower chamber like the bill renaming the Ninoy Aquino International Airport and a resolution that sought an investigation into the now-shutdown media giant ABS-CBN. – Rappler.com