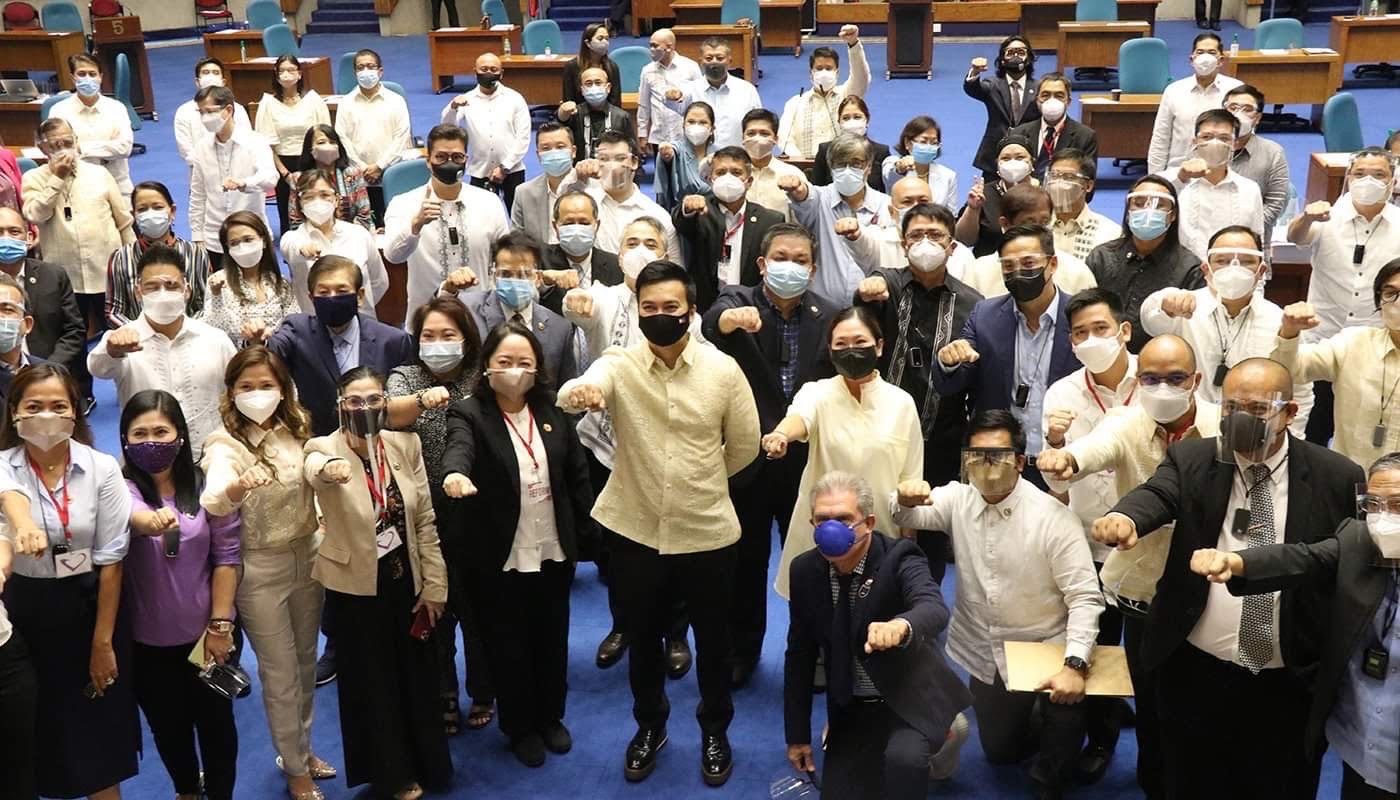 UNITY PHOTO. Speaker Lord Allan Velasco and members of the House pose for a "unity photo" on October 13, 2020.

Photo courtesy of the House of Representatives

Speaker Lord Allan Velasco continued his purge of the allies of his ousted rival Alan Peter Cayetano from the House leadership.

Buhay Representative Lito Atienza replaced Fernandez as deputy speaker, while Las Piñas Representative Camille Villar was supposed to hold the post once held by Abu. But hours after her designation, Villar wrote a letter to Velasco declining the post.

“It is an opportune time to work with my fellow congressmen and the leaders of the House of Representatives on policy measures that would give personal and economic relief to our kababayans amid the past disasters and the pandemic. But the greater tact is adherent responsibility to our constituents, the adroit loyalty to allies and friends, and the constant affinity to the leadership and nation,” Villar said.

Still, the daughter of Senator Cynthia Villar and business tycoon Manny Villar promised to back Velasco’s legislative agenda. The younger Villar is a member of the Nacionalista Party, which her father chairs and which counts Cayetano among its members.

In October, Cayetano had stripped off the deputy speakership of staunch Velasco ally and 1-Pacman Representative Michael “Mikee” Romero and replaced him with Castro.

But when Velasco successfully staged his coup against Cayetano, one of the Marinduque congressman’s first acts was to reinstate Romero as deputy speaker.

While lawmakers formally elect House officials during the session, any motion to reorganize the leadership is made on the floor only when the Speaker has given his blessing.

Velasco and Cayetano were embroiled in a bitter rivalry for months after the latter refused to honor their term-sharing agreement for the speakership – a deal brokered by President Rodrigo Duterte himself.

After Cayetano’s political maneuverings turned off House members, Velasco was able to unseat his more seasoned nemesis in an unprecedented remote session held inside a sports club on October 12. (READ: INSIDE STORY: Cayetano’s hubris turns Batasan into the House of Lord)

Velasco’s dramatic election as Speaker was then formalized during plenary proceedings inside the Batasang Pambansa a day later.

That Velasco is removing Cayetano’s allies from the House leadership is not surprising.

When former president turned Pampanga representative Gloria Macapagal Arroyo staged her coup against Davao del Norte 1st District Representative Pantaleon Alvarez in 2018, many of Alvarez’s allies in the House leadership were replaced by lawmakers close to Arroyo instead.

On Wednesday, Pampanga 2nd District Representative Juan Miguel “Mikey” Arroyo was also elected chairperson of the committee on energy, the position that Velasco once held before becoming Speaker.

Mikey is the son of former president Arroyo, whose party Lakas-CMD was the swing vote that helped secure Velasco’s takeover as Speaker.

ACT-CIS Representative Eric Yap, chair of the House committee on appropriations tasked to scrutinize the annual national budget, was given an additional post.

He was named vice chairperson of the committee on accounts, which is now being chaired by his close friend, presidential son and Davao City 1st District Representative Paolo Duterte.

Velasco’s former chief of staff Jocelia Bighani Sipin resigned as House secretary-general. She was replaced by former Batangas congressman Mark Llandro Mendoza, who took his oath before the Speaker himself. – Rappler.com