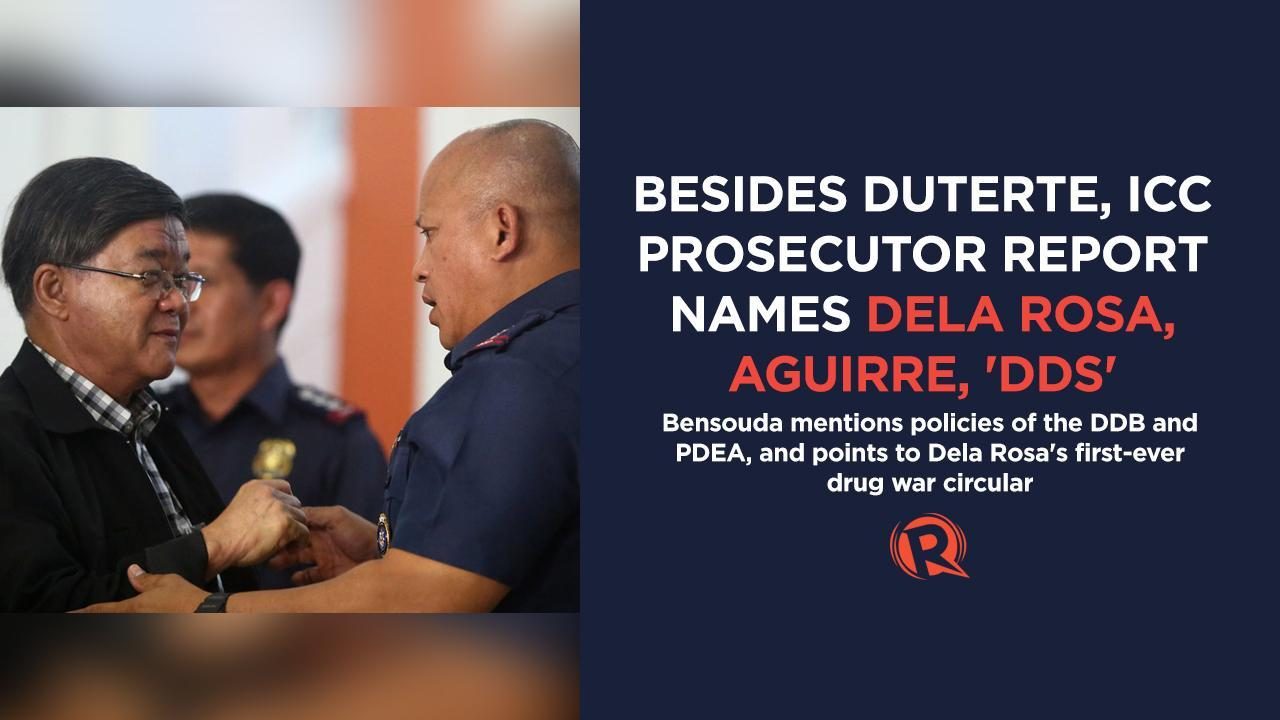 This part of the process in the ICC does not identify subjects or respondents yet, as that will only happen in a pre-trial stage, or the next stage after investigation. The Philippines is at a stage where Bensouda has requested authorization to open an investigation, which the pre-trial chamber composed of 3 judges must first approve.

But in her 57-page request submitted to the chamber, Bensouda accuses Duterte of having what “appears” to be an official State policy to kill, not only in the war on drugs since 2016, but also in alleged killings executed by the so-called DDS when Duterte was vice mayor and mayor of Davao City from 2011 to 2016.

One of the elements of such policy, for Bensouda, was the “plethora of public statements made by Duterte and other Philippine government officials encouraging, supporting and, in certain instances, urging the public to kill suspected drug users and dealers…to attack civilians.”

That’s where Dela Rosa comes in, being the so-called architect of the war on drugs.

“Before being announced as the Duterte administration’s first National Police Chief, Dela Rosa explained the ‘focus’ of the forthcoming War on Drugs policy ‘will be killing those involved in drugs. There will be deaths in illegal drug trade. So the drug lords out there, watch out, because I am going after you,'” said Bensouda.

This was in reference to a speech by Dela Rosa inside Camp Crame in May 2016 before he was appointed police chief.

Aguirre, on the other, hand was referenced by Bensouda for his statement saying that drug addicts “are not part of humanity.”

Rappler has reached out to both Dela Rosa and Aguirre to get their statements, but they have not responded as of writing. This story will be updated once they do.

In including the Davao City killings in her request for investigation, Bensouda said that there is information that the same actors did the kills in Davao and then in Metro Manila as part of the bloody war on drugs.

Dela Rosa’s circular CMC No. 16-2016, which operationalized the drug war, was also mentioned by Bensouda, particularly the use of the word “neutralize.”

“The available information indicates that these words were intended to
denote, and have been interpreted by relevant domestic actors to include, killing,” said Bensouda.

This is also an issue in the two petitions pending before the Supreme Court seeking to declare the war on drugs unconstitutional, where human rights lawyers pointed out that “kill” is never mentioned in any law, rule or manual. They claim that by putting the word neutralize on an official circular, it almost ordered policemen to kill.

Former police chief Oscar Albayalde was also mentioned, but just as a successor to the drug war policy.

Bensouda, however, pointed out that there is data showing that the highest number of drug-related killings, whether by cops or vigilantes, “was recorded during the phases of the War on Drugs when the Philippine National Police was involved in anti-drug operations, whether as the lead agency or under the Philippine Drug Enforcement Agency (PDEA).”

No PDEA official was named. Neither was any official from the Dangerous Drugs Board (DDB) named, but Bensouda mentioned DDB’s Board Regulation No. 1 signed in August 2016 when Duterte was also president.

Section 7 of the regulation provided for conditions on how law enforcement can get monetary reward for a successful anti-drug operation.

Combining that with information from policemen who confessed to being rewarded for every kill, Bensouda concluded that there were “financial incentives and pressure on physical perpetrators to commit killings.”

The regulation was signed by former DDB chairman Felipe Rojas, who was former president Benigno Aquino III’s appointee and who just overlapped with the Duterte administration. Duterte replaced Rojas with Benjamin Reyes soon after. Both Rojas and Reyes were not named by Bensouda.

A study by the Ateneo Human Rights Center concluded that the first circulars issued in the drug war violated constitutional rights, but there was an effort to correct those policies to cover up the legal loopholes. – Rappler.com