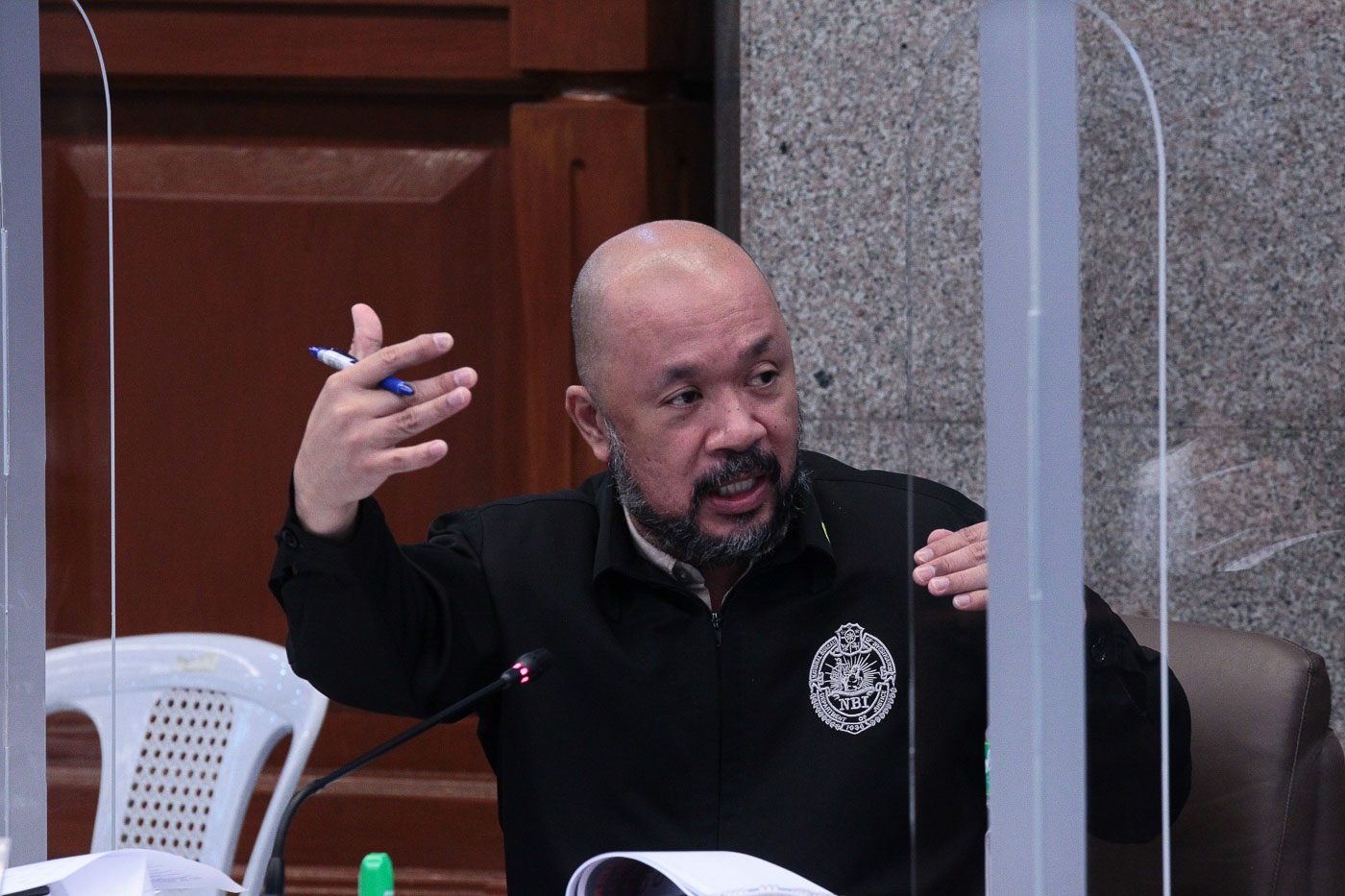 NBI REPORT ON CALBAYOG CITY MAYOR’S KILLING. National Bureau of Investigation Eastern Visayas Regional Director Jerry Abiera testifies at the hybrid hearing of the Senate Committee on Public Order and Dangerous Drugs on June 9, 2021. He presented the result of their investigation into the killing of Calbayog City Mayor Ronald Aquino and two of his security escorts on March 8, 2021.

Facebook Twitter Copy URL
Copied
NBI Eastern Visayas chief Jerry Abiera says their investigation is based on the affidavits of 53 witnesses, including those who provided personal videos taken near the scene, and CCTV footage

The ambush that led to the death of Calbayog mayor Ronaldo Aquino, his aide, and driver in early March was allegedly planned for months by members of Samar police, the National Bureau of Investigation (NBI) in Eastern Visayas told a Senate panel probing the incident on Wednesday, June 9.

During the hearing of the Senate committee on public order and dangerous drugs, NBI Eastern Visayas chief Jerry Abiera said in his presentation, “The NBI Samar District Office is ready to file multiple murder and frustrated murder as defined under Article 248 of the Revised Penal Code, as well as administrative cases against the subjects.”

He said the NBI recommended the prosecution of the following members of the Philippine National Police and civilians:

Abiera said their investigation is based on the affidavits of 53 witnesses, including those who provided personal videos taken near the scene, and CCTV footage.

He said two phones were found in the crime scene and turned over to the NBI. Abiera said once the NBI secured warrants to examine computer data (WECDs) from a Calbayog court, phone data “revealed that Mayor Aquino had been subjected to monitoring as early as October 2020.”

“The vehicles he and his associates used were under the microscope of his assailants and showed the latter’s determination and plan to eliminate Mayor Aquino. Text messages also disclosed that Mayor Aquino had been falsely implicated [in the] illegal drug trade,” he said.

Authorities who were at the Senate hearing also cleared Aquino of any links to the illicit trade.

The NBI findings contradict the findings of the PNP’s special investigation task group (SITG), which told the Senate panel that according to their witnesses, the incident was a “shootout” as the mayor’s group allegedly fired shots first at anti-drug cops.

During the hearing, Abiera presented CCTV footage secured from an establishment that showed Aquino’s convoy being tailed by a beige Toyota Innova on March 8.

The Toyota Innova, which was used by Police Captain Joselito Tabada who also died that day, was seen taking a “hurried U-turn” to tail the mayor’s convoy. Tabada was the chief of the Provincial Drug Enforcement Unit.

According to the NBI, a witness saw a white pickup truck allegedly hitting the mayor’s van, pushing it to the railing of the bridge where the vehicle got stuck. Men were then seen alighting the pickup and allegedly shooting at the mayor’s vehicle.

This was corroborated by another witness, Conrado Yauder, whose vehicle got caught in the crossfire. His son, Clint John, sustained a gunshot wound.

The pickup truck, which had no license place, was identified as a Toyota Hilux. Sucayre was among its passengers. Upon verification, the NBI found out that the vehicle was lent to Sucayre in September 2020.

Abiera cited another set of witnesses who told the NBI that the mayor’s van was being “fired upon by the suspects who were in groups of about four and three men firing alternately and systematically. That when a group would run out of ammunition, they would retreat to reload, and while the other (group) would take turn to fire at will.”

“It was a cycle or pattern for several tuns until a lone gunman approached the HiAce and fired close range at Mayor Aquino inside of the van, and that one of the suspects shouted, ‘Tama na, patay na (Stop it, he’s dead),” he added.

Abiera said based on the autopsy report, Aquino sustained over 20 gunshot wounds.

Responding to senators’ questions, Abiera said the NBI has yet to pinpoint a “mastermind” behind the incident, as well as the motive for the attack.

When the Senate panel chair, Senator Ronald dela Rosa told Abiera that the motive for Aquino’s death might be politics-related since the mayor had been cleared of drug links, and that they should get to the bottom of the case, Abiera said, “We will try with the cooperation of community.”

During the hearing, Samar 1st District Representative Edgar Mary Sarmiento, an ally of Aquino, noted the killings in Calbayog “happen 1.5 years” before the elections, and that voters in the city represent 60% of the voters in the 1st District of Samar.

In the SITG version of the incident narrated by Cinco during the Senate hearing, Sucayre was supposedly on his way to meet Tabada at the 1st Samar Provincial Mobile Force Company (Camp CARA) on March 8. Tabada supposedly asked for his assistance in operations against rogue cops.

He said the police were conducting a “red teaming inspection on the operational readiness of PNP units in the area.”

Cinco told the Senate panel that on the cops’ way to the police camp, “unidentified personalities onboard” the Toyota HiAce – Aquino’s van – allegedly “first bumped the vehicle driven by Colonel Sucayre while in the process of maneuvering to overtake it.”

“The latter was then prompted to return fire using his PNP-issued FAs (firearms) to defend themselves,” Cinco said in his presentation, adding that Sucayre supposedly did not know who was inside the van until they reached Camp CARA to seek reinforcement.

Cinco said murder and frustrated murder complaints were filed against the mayor’s son, Ronald Mark Aquino; Police Corporal Ramil Rosales; and John Does, as well as grave threat complaints against Aquino before the City Prosecutors’ Office in Calbayog City on April 8.

Homicide and frustrated homicide complaints were filed against Sucayre, Tan, and Armeza on April 16.

Aside from Aquino, his driver Dennis Abayon and police escort Staff Sergeant Rodeo Sario were killed in that incident.

On the PNP side, aside from Tabada, Police Staff Sergeant Romeo Laoyon was also killed.

During the hearing, Police Corporal Edsel Omega, who was driving Tabada’s vehicle on the day of the incident, claimed he saw the mayor’s son and Rosales shooting at police. Omega was unharmed.

Mark denied the allegation, saying he was at the resort with other family members, waiting for his father to join his birthday celebration, and only went to the area of the incident when he learned about his father’s “ambush.”

He said the area was already “quiet” and that there were many civilians when he got there. 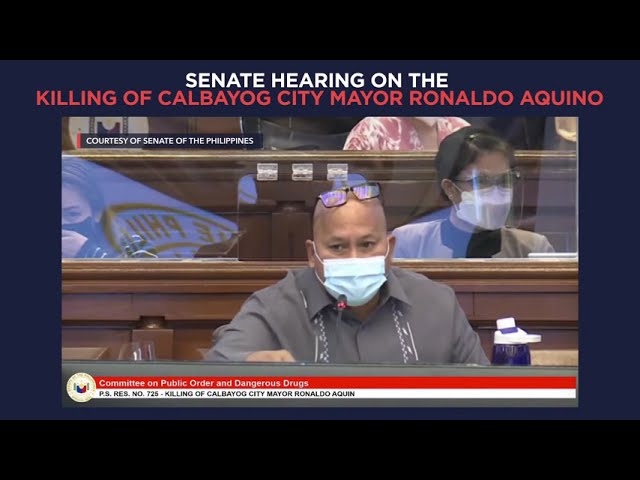 During the hearing, a police witness came forward to implicate Tabada as the officer who allegedly enlisted him to surveil Aquino. He executed a sworn affidavit that was submitted to the NBI.

Jose “Jay” Senario, who was with the Calbayog City police at the time of the operation, claimed that Tabada called him to a meeting “two years ago” on the surveillance of Aquino.

“The fact, as he said, is that the ambush of Mayor Aquino had long been hatched by the police officers involved,” the NBI said in its report, citing Senario.

Senario testified during the hearing but decided not to proceed after he was advised by Lacson and panel chair Senator Ronald dela Rosa, both former PNP chiefs, to seek the advice of counsel first so that he would not incriminate himself.

Senario made the decision after he was informed that he cannot apply to become a state witness as he was an active policeman, and that while he can ask the Senate to give him legislative immunity for whatever he would say during the hearing, this would still be up to the court.

Dela Rosa said another hearing would be scheduled to hear the side of other personalities who were named during the Wednesday hearing. – Rappler.com