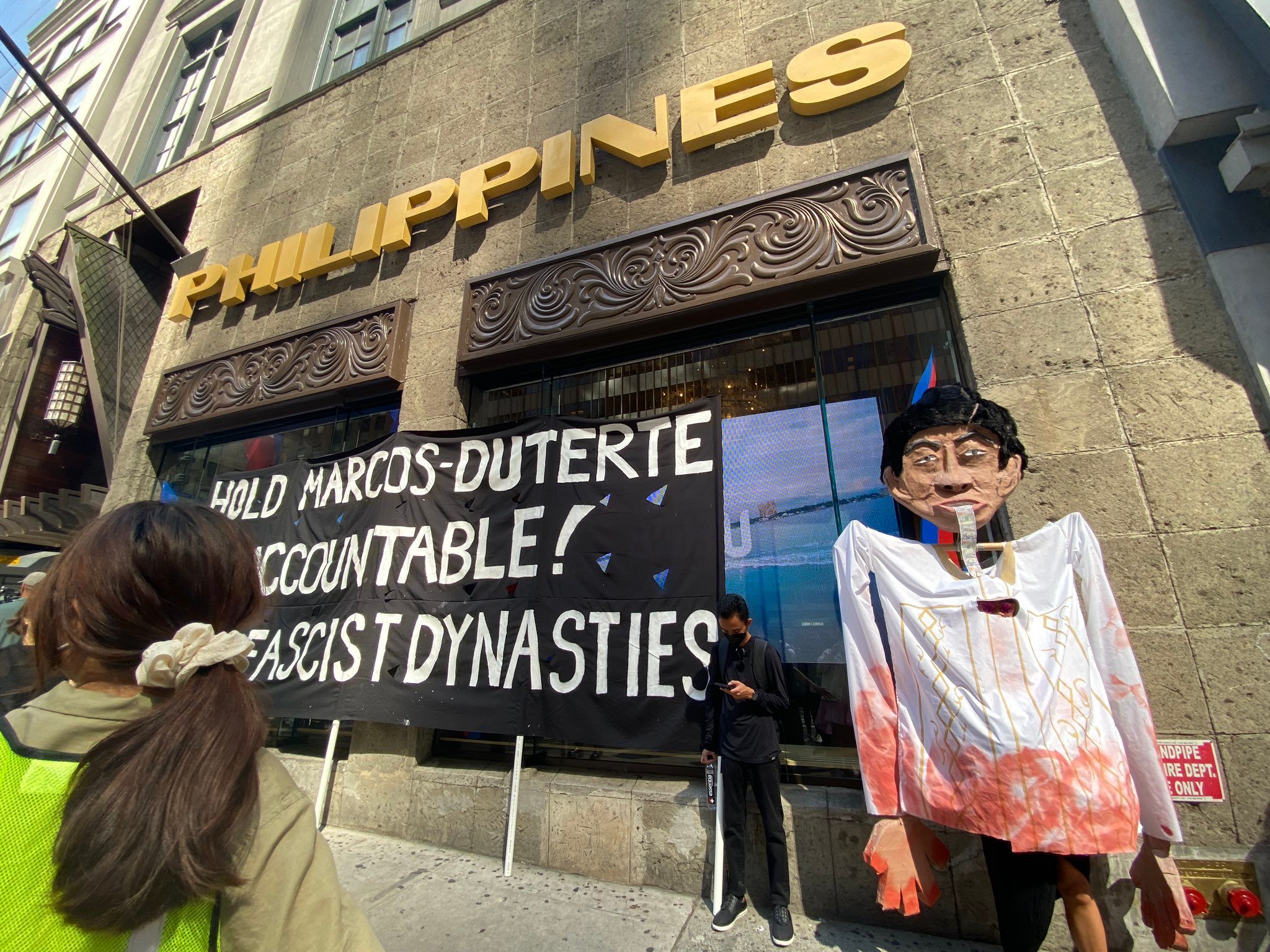 'NEVER AGAIN.' Protesters gather outside the Philippines Permanent Mission to the United Nations ahead of President Ferdinand Marcos Jr.'s address before the UNGA high-level General Debate.

Facebook Twitter Copy URL
Copied
President Ferdinand Marcos Jr.'s US trip coincides with the commemoration this week of the declaration of Martial Law 50 years ago

MANILA, Philippines – Fifty years after the declaration of Martial Law in the Philippines, Filipino groups gathered in New York to speak out against the second coming of a Marcos, with protesters confronting President Ferdinand Marcos Jr. about the abuses seen under his late dictator father’s regime.

Marcos, who is currently taking his first trip to the United States as President, traveled to New York to attend the United Nations General Assembly (UNGA) this week. During his working visit, the Philippine leader was also scheduled to meet with leaders of American firms and business groups in a bid to attract investments for the Philippines.

Marcos’ visit coincides with the commemoration this week of the declaration of Martial Law 50 years ago on September 21.

Across a city that holds a “sentimental place” for the President, the past and the present collided along the streets that hold buildings once purchased by the former first lady Imelda Marcos, the President’s mother, and in places like the Philippine consulate.

As Marcos was set to take the stage at the UNGA, protesters gathered outside the Permanent Mission of the Philippines to the United Nations along 5th Avenue.

They said of Marcos’ UNGA address: “It is a travesty and a slap in the face to both the courageous Filipinos who survived torture and economic ruin, and the families of those who were disappeared and murdered at the hands of the Marcos family – many of whom live in the United States.”

The building that houses the consulate in itself is a reminder of the Marcos family’s decades-long rule. A plaque inside the building says the building was “inspired and dedicated” by the former first lady.

Earlier in the day, as Marcos paid a visit to the New York Stock Exchange (NYSE), protesters were heard chanting “Never again to Martial Law!” Groups gathered likewise booed the new leader and accused him of being a coward.

Local reports estimated roughly 50 people attended the protest at the NYSE. Demonstrations represented Anakbayan’s Manhattan chapter, the Kabataan Alliance, the International League of People’s Struggles, and the Northeast Coalition to Advance Genuine Democracy in the Philippines.

Marcos’ ongoing trip to the US marks the first time he is publicly known to have traveled to the country in decades. Before assuming the presidency, he was unable to travel to America owing to a standing contempt order issued by a US court against him and his mother in 1995 over a human rights class suit filed against his father.

As a head of state, Marcos is granted diplomatic immunity, allowing him to step foot in the US without the threat of subpoena or arrest in connection with the decades-old case. – with reports from Bea Cupin/Rappler.com