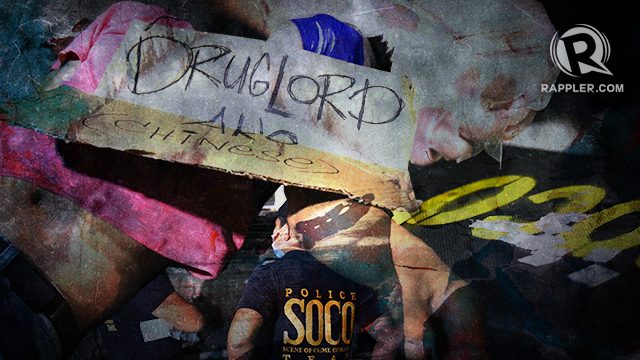 The Commission on Human Rights (CHR) has hurdled 4 years of stonewalling from the Duterte government to find the files of nearly 2,000 deaths in police drug operations, and discovered that only 10 cases reached courts.

Human Rights Commissioner Karen Gomez-Dumpit told Rappler on Saturday, January 16, that as of their last update, they have investigated 1,893 deaths in police drug operations.

This is only 24% of the total 7,884 police killings in the drug war that the Philippine National Police (PNP) has counted as of September 2020.

Dumpit said that of the 1,893 deaths, only 10 cases reached courts with 57 others in various investigative levels.

Of the 67 cases, 45 are against policemen, and 22 are against Philippine Drug Enforcement Agency (PDEA) agents.

Sixty seven of 1,893 is a dismal 3.5% of deaths that were investigated by the system.

Dumpit clarified that “there could be more out there at the prosecution, Ombudsman or court level” that they have not yet found.

The CHR located these death files mostly by proactively investigating, seldom through complaints filed before them, and not at all through the PNP or any government agency sharing information.

“That is an indicator that people are really afraid to report. When you go back to the neighborhoods where families used to live, hindi mo na sila mababalikan doon (you can’t find them anymore) because they all left already,” Dumpit said in a Rappler Talk interview.

“That’s something we see as a pattern also. Most of these people go back to the provinces or just move to other places kasi napapag-initan na sila doon (because they’re getting targetted), not to mention they are ostracized, others are afraid,” Dumpit added. (READ: How the Duterte government underreports drug war killings)

CHR revealed their data following the Department of Justice’s (DOJ) still secret partial report of a high-level inter-agency review of 5,655 deaths in police operations, which aims to reinvestigate and see if more cases need to be filed, and close the investigative gaps on cases that go stale.

A 2019 Rappler analysis found that the Duterte government has allowed thousands of the killings to go unsolved, owing to the systematic gaps at the police and prosecutorial levels.

But despite Justice Secretary Menardo Guevarra’s commitment to the United Nations Human Rights Council (UN HRC) that the CHR will be involved in the review, the commission was not included.

“This report must be publicized, and open to other independent mechanisms for fresh eyes, looking at the analysis,” Dumpit said.

Dumpit said the review should be able to spot if there are police officers or police stations repeatedly involved in anti-drug operations that result in deaths.

“If we have that report, we can compare with ours and see unique names there, see the patterns – who are those police officers who are often involved in a police operation that results in death. We map it out,” Dumpit said.

Guevarra said he had submitted the partial review to President Rodrigo Duterte. “Let’s give him time to pore over it,” Guevarra said.

In the last 4 years, PNP has not shared any information with the CHR about drug war deaths, citing data privacy, even though Section 19 of the Data Privacy Act says the law is not applicable if the information is for the purposes of an investigation in relation to criminal, administrative, or tax liabilities of the subject.

“We are an investigative body,” Dumpit asserted correctly. The CHR, like the PNP and the National Bureau of Investigation (NBI), can investigate and file complaints.

The CHR had hoped that they would be looped in after the DOJ committed the drug war review to the UNHRC, even name-dropping the CHR to boost its position that international investigations like that of the International Criminal Court (ICC) was not needed.

“Can we say there are changes from then and now? There’s none,” Dumpit said.

The DOJ-led review involved the PNP and Guevarra had earlier said he would consult the police if he could share data with the CHR.

That obviously didn’t happen at least for the partial report. Why?

“Your guess is as good as mine, but the fact remains that the PNP has been reticent, they’ve been resisting cooperation. It’s not lack of cooperation – there is no cooperation particularly on this issue,” said Dumpit.

It turned out that Nuezca had faced 6 administrative cases since 2010. The latest are two cases in 2019 – a year before the Tarlac incident – involving homicide.

“It’s good to inquire whether the homicides are actually connected to the anti-drug operations,” said Dumpit.

The PNP had also revealed that Nuezca was demoted in October 2020 for an extortion case way back in 2014.

“If you look at that particular timeline, that was 2014 and he was demoted in October 2020, you see only just the investigation portion of it and they just demoted him and it took 6 years, that tells you already that the timeline is against those who seek justice and remedy,” said Dumpit.

The question on how many cases reached the justice system is a crucial one because if ICC Prosecutor Fatou Bensouda determines that the Philippines is either unable or unwilling to probe these cases on its own, she can open an investigation phase where summons and warrants can be issued.

In her latest report in December, Bensouda said  there is “reasonable basis” to believe that crimes against humanity were committed in the drug war, but deferred making a decision on whether to seek permission to open an investigation.

The Philippine case comes at a pivotal time for the ICC, when the Court is trying to manage its case load, preparing for Bensouda’s successor, all while battling an existential crisis of trying to be a more meaningful venue for justice. – Rappler.com