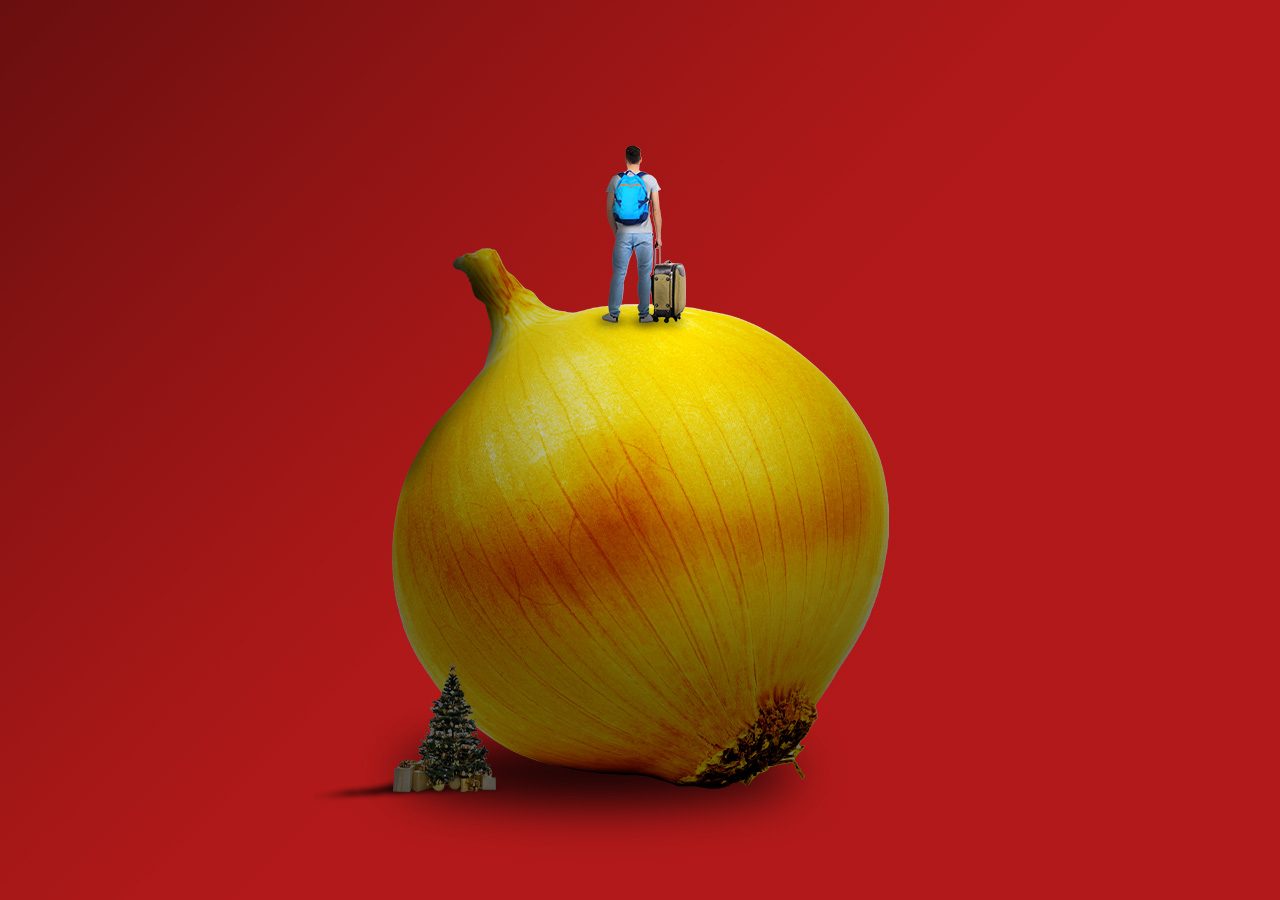 Facebook Twitter Copy URL
Copied
With the Philippine inflation rate hitting a 14-year high of 8% in November, some OFWs face a gloomier Christmas than usual

MANILA, Philippines – “I have an onion in my hand,” said overseas Filipino worker (OFW) Mark Aquino as he presented the vegetable to a Zoom conference with reporters on Friday, December 16. This was a symbol of the Marcos administration’s shortcomings, he said.

“Here in the Middle East, when we go grocery shopping and see onions, we don’t know if we should be happy, angry, or sad, because one kilo of onions costs just P30 here if you convert it to pesos. And we’re in countries that import onions,” said Aquino, Migrante Middle East’s regional coordinator.

“Meanwhile, in the Philippines, onions cost [around P300] per kilo, even if we have onion farmers,” Aquino added.

The thought of onions hits hard even on another side of the world. In the same media conference, United Filipinos in Hong Kong chairperson Dolores Balladares-Pelaez said that her family has to consider noche buena (traditional Christmas Eve dinner) recipes that don’t use onions because of how expensive they are.

“Our family has said that they have to cut down for their Christmas dinner. They will make do with cooking simple recipes just so they can have something special for Christmas Eve. It’s not like before, where if you could afford dessert, you would serve it too. Now, they won’t,” said Pelaez.

With the Philippine inflation rate hitting a 14-year high of 8% in November, some OFWs face a gloomier Christmas than usual. Not all gift requests from family members may be fulfilled this year, and some who were hoping to come home deal with the reality that it’s just too expensive for now.

Eurostat, the statistical office of the European Union, pegged euro area annual inflation at 9.9% in September, and 10.7% in October. Rhodney Pasion, Migrante Europe secretary general, said that the effects of inflation in the Philippines were comparable to what Filipinos abroad felt, with no guaranteed salary increases.

“Instead of us being able to send the amount we were able to send before inflation hit this high, we can no longer afford it because our salaries don’t increase just like that here in Europe,” Pasion said.

“We can’t send as much as we could before, because our electricity bills and other expenses like gas, which we use for heaters, has increased by 100%,” said Pasion.

Even with higher exchange rates, it is still difficult for some OFWs’ remittances to keep up with rising prices in the Philippines. No homecoming this year

Gio Alonzo, an international student in Canada who also works full-time, is looking for something to do this Christmas.

All his relatives who were with him in Mississauga were able to “revenge travel” this year, but it wasn’t as easy for him.

“Some OFWs like my relatives can afford to travel because they didn’t travel last year, and dollars are more powerful now, so they don’t think much of [money]. I hear from them that the only expensive thing is the flight ticket,” said Alonzo.

“It will significantly hurt my finances if I go back to the Philippines for a couple of weeks or months because I have monthly bills here. Thankfully, I only have to pay for rent, utilities, and insurance. But other people have car payments and house loans to worry about,” he added.

Alonzo also worries about the risk of getting COVID-19 during and after vacation leave in the Philippines.

For Abu Dhabi-based Jill, a barista who asked her surname be withheld, it is the fourth Christmas away from home.

“I’m thankful for social media, but there’s nothing like being with them at home. [Plane] tickets are so expensive, and even when there are promotions, you have to think about the expenses when you get home because of high prices,” said Jill.

Jill was able to visit the Philippines from July to September 2022, so she has an idea of what the prices are like back home. It was her homecoming after three years of working in the United Arab Emirates.

“I really felt the rising prices when I went home. It’s like, every time I breathed, P500 [gone]. The value of P100 feels so low compared to the past few years. I think if I sent P500 to my godchild now, the value would be very low because you can’t buy much with P500 [these days],” she said.

In the Friday press conference, Aquino also mentioned a Filipino community member in the Middle East whose plans of coming home were interrupted by inflation.

“He had completed his contract, and he wanted to go home to the Philippines for good. He wanted to start a business. But when he saw how high the cost of living was, he ended up extending his contract instead of finally coming home to his family,” Aquino said.

The Bangko Sentral ng Pilipinas forecasted in November that inflation for 2022 and 2023 will likely be above the 2% to 4% target range before easing to the low end of the target range in 2024. – with a report from Yana Uy/Rappler.com

All quotes have been translated to English.