LOS ANGELES, USA – Judge John H. Reed of the Los Angeles superior court in California on Monday, on July 11, granted a Filipino-American family’s request for a protective order as their assailant in a parking lot attack pleaded not guilty to misdemeanor battery and felony aggravated battery with hate crime enhancements.

Nicholas Weber remains in custody at the Los Angeles Men’s Central Jail unless he posts a $150,000 bail.

Weber attacked Nerissa Roque and her daughter Patricia, and later Nerissa’s husband, Gabriel, in a North Hollywood parking lot on May 13. He refused to attend the first few hearings on his case even after his arrest on June 13.

The protection order, issued despite opposition from the public defender representing Weber, covers a five-block perimeter around the Roque family residence to ensure their safety in case Weber is released on bail.

Speaking to journalists and advocates after the hearing, Nerissa and Patricia  said they were pleased by the outcome.

“The legal team expected the judge might release him or significantly lower the bail,” Nerissa said.

If not for the video evidence taken by her daughter, Patricia, and other bystanders, some of whom helped free her from Weber’s chokehold, Nerissa said they might not be around to seek justice for Weber’s crimes.

“Community pressure helps in continuing seeking justice. But it continues to be an open case and we invite more community members, more Filipino organizations, more Asian and multi-racial organizations to continue to stand with us,” Nerissa added. 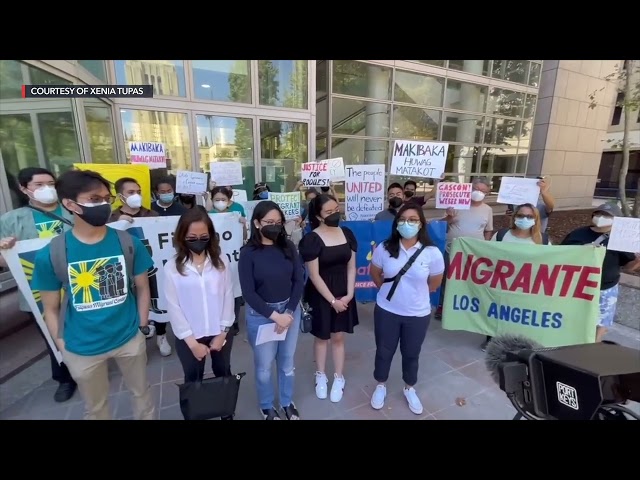 LA County Deputy District Attorney Paul Kim argued in court that there was reasonable ground for the protective order because of Weber’s sobriety issues.

Upon Kim’s request, the order by Judge Reed was served in open court to Weber, who was behind locked doors not visible to those in the half-full courtroom.

Kim earlier assured the Roques that he would oppose reduction of bail and release of the suspect in recognizance because Weber failed to appear in the Van Nuys court for the hearing of the case.

Despite Weber’s arrest for a municipal offense in Orange country and transfer to Los Angeles, an extraction order had to be issued to compel him in court, the prosecutor noted.

The judge added $3,000 bail for Weber’s three probation violations apart from Kim’s motion during the August 19 hearing on the battery cases to add another $30,000 bail for the hate crime enhancements.

Kim is also exploring the possibility of amending into felony battery the choking of Nerissa after the family said the misdemeanor charge did not reflect their trauma and the near-death assault, with bystanders having to pull Weber off his victim.

Weber’s team had opposed allowing cameras in court. Judge Reed granted their motion only for the July 11 morning hearing, but said the media could file a separate motion for the upcoming hearing.

Members of the National Alliance for Filipino Concerns, Nikkei Collective, Progressive Asians for Neighborhood Action, Anakbayan-LA, Gabriela, Migrante-Los Angeles, and the neighborhood association in San Fernando Valley came to support the Roque family with brief programs before entering the courtroom and after the hearing.