IN PAIN. Families of missing cockfight enthusiasts or sabungeros hold a dialogue with Justice Secretary Boying Remulla at the Department of Justice on December 2, 2022.

MANILA, Philippines – At least six people will face kidnapping and serious illegal detention charges for their involvement in the kidnapping of at least six sabungeros (cockfight aficionados), the Department of Justice (DOJ) announced on Thursday, December 22.

In a briefer, the justice department said the panel of prosecutors decided to file the charges against six individuals – six counts each – both for kidnapping and serious illegal detention.

The DOJ said the prosecutors had found probable cause to indict:

The charges will be filed before the Regional Trial Court of Manila.

According to the justice department, the six “conspired” in the kidnapping of the six sabungeros who left Tanay, Rizal at around 1 am on January 13 this year. They were headed to the Manila Arena to join a 6-cock stag derby. The DOJ added that the victims were forced to board a gray van at around 7:30 pm and were never seen again.

The victims were identified as: 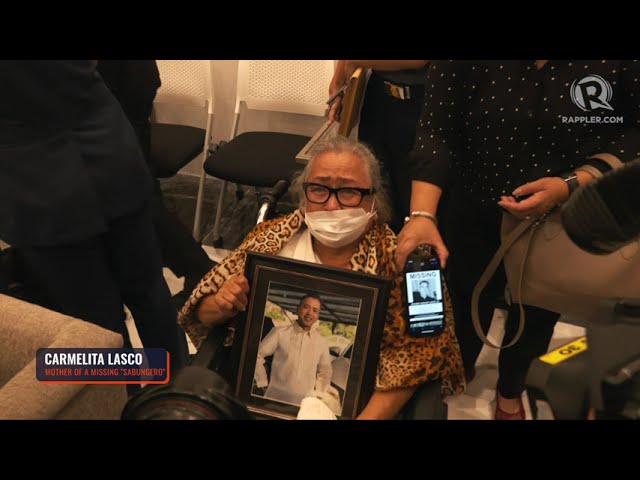 The justice department said the respondents “vehemently” denied the allegations, saying that “their individual participations in the disappearance of the victims were not specifically alleged.” They added that the witnesses have no personal knowledge of the alleged crime.

But the DOJ said the panel only gave “scant” consideration to the respondents’ defense because some of the respondents were positively identified. Witnesses also gave “credible” testimonies.

In particular, Venancio Inonog, father of John Claude, said he was able to speak on the phone with his son before the latter went missing. Inonog said his son told him they were forced to ride the van. Not only that, he said his son positively identified Bayog, Consolacion, and Matillano.

Inonog added he also heard “a lot of screaming” before their call ended. After that, he repeatedly called his son but his son’s phone had already been turned off.

Aside from Inonog, another witness, Denmark B. Sinfuego, also surfaced. According to Sinfuego, he saw “Patidongan, Codilla, Zabala, Bayog, Consolacion and Matillano Jr. capture the victims Cristorum, Gomez, and Velasco.”

Prior to the promulgation of the new charges, the DOJ announced on December 19 that it would file charges against Police Staff Sergeant Daryl Paghangaan and patrolmen Roy Navarete and Rigel Brosas for the robbery and kidnapping of Ricardo Lasco, an e-sabong executive. Lasco was allegedly abducted in Laguna on August 30, 2021.

5 cops dismissed from service over abduction of e-sabong executive Aside from the criminal charges, the cops involved in Lasco’s abduction also faced administrative charges, according to the Philippine National Police. Paghangaan, Navarete, Brosas, and two other cops were dismissed from the police service for their involvement in the alleged abduction. – Rappler.com