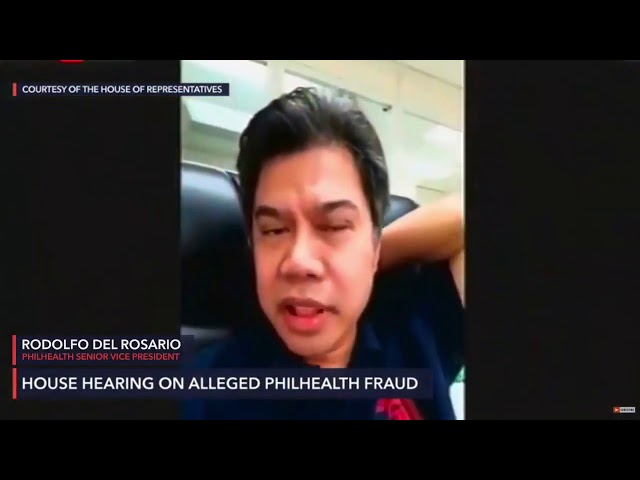 Facebook Twitter Copy URL
Copied
PhilHealth only sends copies of the IRM circular to UP Law Center's Office of National Administrative Register – among the requirements for its effectivity – only on June 11, 2020

A high-ranking official of the Philippine Health Insurance Corporation (PhilHealth) admitted that the disbursements for the controversial Interim Reimbursement Mechanism (IRM) from March to early June were illegally released.

Rodolfo del Rosario Jr, PhilHealth senior vice president for the legal sector, made the admission as he was grilled by Deputy Speaker Rodante Marcoleta during the resumption of the joint House committee investigation on the anomalies hounding the state health insurer on Thursday, August 20.

“Sir, it would appear that those funds were not released based on the prerequisite set by the circular on the publication and the furnishing of copies to the ONAR (Office of National Administrative Register),” Del Rosario said.

“Yes I agree, Mr Chair. I agree with the chairman that it’s illegal,” he added.

Marcoleta zeroed in on PhilHealth Circular No. 2020-0007, which set the guidelines of the implementation of the IRM during the coronavirus pandemic.

It was first used for Super Typhoon Yolanda (Haiyan) in 2013, then the Marawi siege in 2017, the Taal Volcano eruption in January 2020, and now the COVID-19 crisis.

Marcoleta pointed out that while PhilHealth’s latest IRM circular was signed by its president and CEO Ricardo Morales on March 20, 2020, the effectivity clause indicated two requirements before the IRM shares could legally be disbursed.

The effectivity clause states: “This Circular shall take effect immediately from its publication in a newspaper of general circulation and (emphasis ours) 3 certified true copies had been furnished the Office of National Administrative Register of the UP Law Center.”

PhilHealth published the circular in the March 21, 2020 issue of Manila Bulletin, but Del Rosario said they gave ONAR the required 3 copies only on June 11, 2020.

The ONAR is the official repository of all the implementing rules and regulations issued by different government agencies.

“Sir, during the Senate hearing, it was mentioned that it was only in June that PhilHealth provided copies to the ONAR… So if I remember it right, Mr Chair, June 11, ‘yuyng document shown by Mr [Panfilo] Lacson,” Del Rosario said.

It was at this point that Marcoleta fumed even more at Del Rosario, asking the embattled PhilHealth official what happened now to the IRM funds released before June 11.

Del Rosario then said it meant the March to June releases did not follow the requirements of the circular.

Pressed further if he agreed that the disbursements were illegal, Del Rosario agreed.

Lawmakers placed Del Rosario on the hot seat on Thursday after he initially missed the first hour of the proceedings without giving a valid reason.

He had already excused himself twice in past hearings due to supposed health concerns – the same excuses used by Morales and PhilHealth executive vice president and COO Arnel de Jesus.

When both Senior Deputy Majority Leader Jesus Crispin Remulla and House committee on public accounts chair Mike Defensor proposed to hold Del Rosario in contempt if he does not show up within the hour, the PhilHealth senior vice president immediately went online.

PhilHealth already suspended its implementation of the IRM on August 13 after multiple anomalies were uncovered during the ongoing House and Senate investigations.

The Ombudsman also suspended 13 PhilHealth officials amid the corruption allegations, including Del Rosario.

On Thursday, veteran congressman Elpidio Barzaga Jr warned PhilHealth officials that they could be liable for technical malversation for the wrongful use and distribution of the IRM funds.

The Cavite 4th District congressman again raised his earlier findings that several dialysis centers, lying-in clinics, and infirmaries that do not serve COVID-19 patients already received their IRM shares – even ahead of hospitals that actually admit patients suffering from the disease.

He added that the House committees on public accounts, and good government and public accountability are likely to recommend the filing of charges against PhilHealth officials.

“We will present all these documents to the appropriate government agencies when we make our recommendations. At sa nakikita ko (And as I see it), we’ll be recommending the filing of cases against all of you, pati na ang sabi ni Chairman [Mike] Defensor (including what Chairman Mike Defensor said), plunder, if necessary,” said Barzaga.

Economist turned lawmaker Stella Quimbo earlier likened the IRM into “blank checks” given to hospitals since it can be used not just to shoulder the insurance claims of patients, but to also pay for personnel’s salaries, and buy salaries and supplies. – Rappler.com