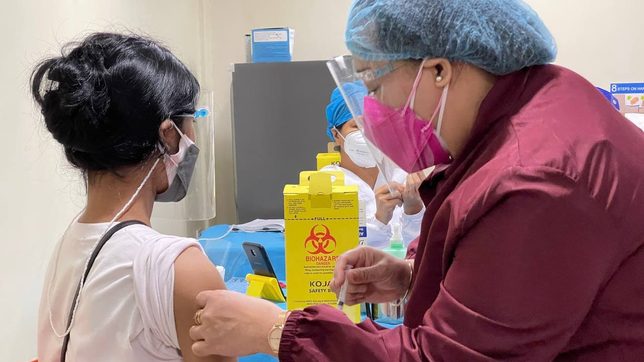 The Philippines will begin its nationwide rollout of COVID-19 vaccination among minors aged 12 to 17 as early as November 3, vaccine czar Carlito Galvez Jr said on Wednesday, October 27.

Galvez said this in an interview with CNN Philippines’ The Source, where he initially bared the nationwide vaccine rollout for the age group would be on November 5 – a date that Health Undersecretary Maria Rosario Vergeire also confirmed to reporters in a Viber message at the time.

Galvez later said that according to the National Vaccination Operation Center, the rollout would be as early as November 3.

In a separate statement on Wednesday, the Department of Health (DOH) also clarified that the vaccinations will begin on November 3.

“Pfizer and Moderna vaccines will still be used among children during the nationwide rollout,” Vergeire.

She said that guidelines for the nationwide rollout are being drafted.

Citing the Philippine Statistics Authority, the DOH said that there are around 12.7 million children aged 12 to 17 in 2021.

As of October 26, 18,666 minors with comorbidities received their first dose of vaccine during the initial phase of the pediatric vaccination in Metro Manila, the DOH said.

Prior to the nationwide rollout, Galvez said that the government will open additional 40 to 50 hospitals nationwide for a pilot run.

“This Friday, October 29, we will open up 40 to 50 hospitals nationwide. All regions will be represented,” he said.

The pilot run of vaccination among minors with comorbidities started in at least 28 select hospitals in Metro Manila.

Philippine drug regulators granted emergency use authorization to  Pfizer and Moderna vaccines for minors as young as 12 in June and September, respectively.

The COVID-19 vaccination of minors is a welcome development for parents, students, and teachers, as this could be a possible game changer for high school-age students who have had to stay at home for two pandemic school openings. – Rappler.com