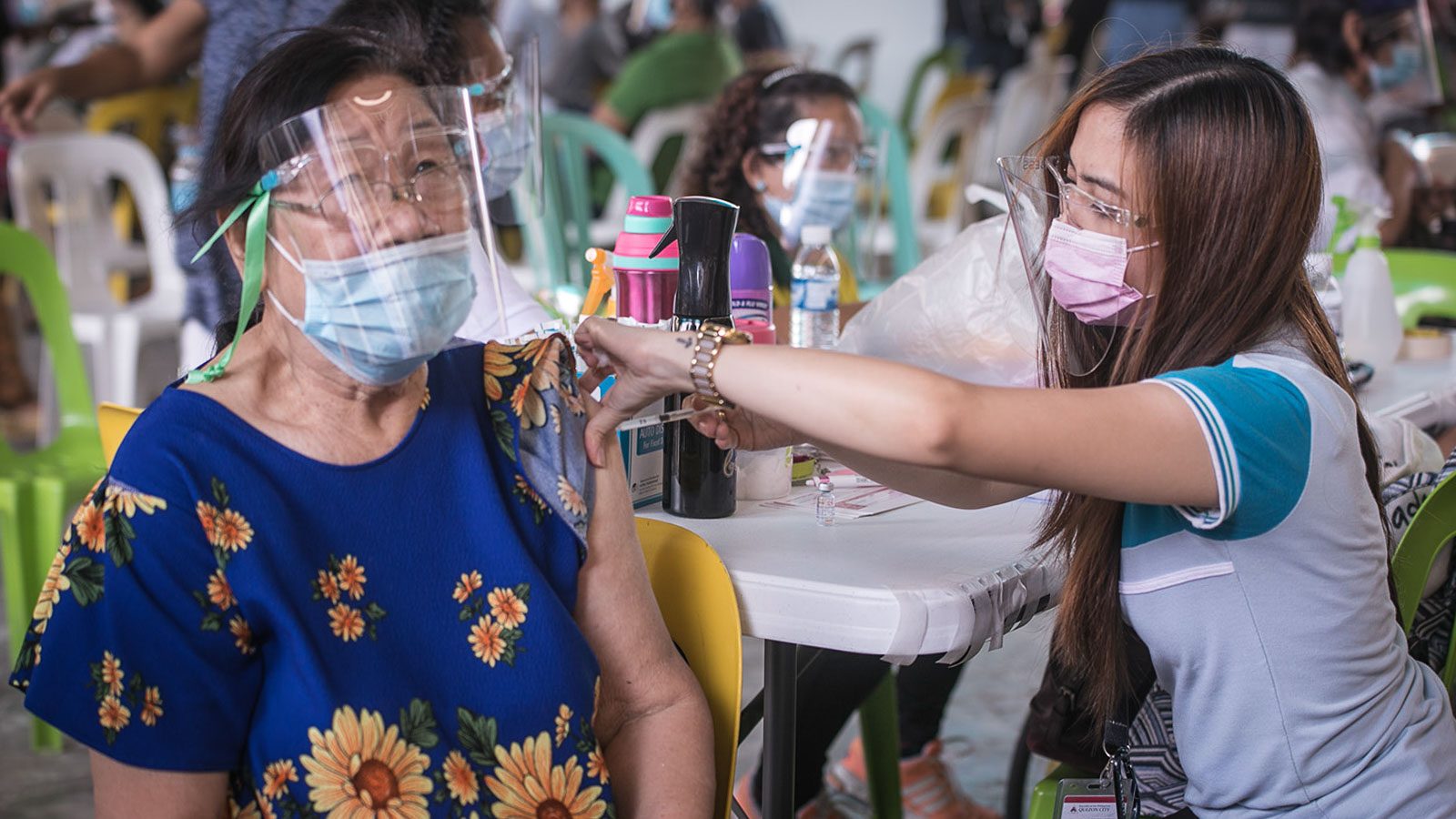 PROTECTION. Individuals from priority groups such as medical frontliners, seniors, and persons with comorbidities get vaccinated at the newly opened vaccination site at Bgy, Pasong Tamo Elementary School in District-6 Quezon City on April 13, 2021.

Facebook Twitter Copy URL
Copied
While the Philippines has ordered at least 5 million J&J vaccines in 2021, it has yet to sign a deal for Bharat Biotech's vaccine

The Philippines Food and Drug Administration (FDA) has issued American drug firm Johnson & Johnson’s and India-developed Bharat Biotech’s coronavirus vaccines emergency use authorizations (EUA), clearing the way for two more shots to be used in a country hard hit by the pandemic in Southeast Asia.

The twin approval for Johnson & Johnson’s (Janssen Pharmaceutica) and Bharat Biotech’s vaccines means there are now 6 vaccines that have been granted emergency approval in the Philippines, which has seen a drastic increase in infections since early March.

On Twitter, Ambassador of India to the Philippines Shmabhu Kumaran praised the approval of Bharat Biotech’s vaccine, calling it a “decisive step in the long battle together against COVID-19.” Bharat Biotech had earlier applied for emergency use of its COVID-19 vaccines last January 22, and the FDA had spent weeks reviewing its application as it waited to receive more documents from the group.

Meanwhile, emergency approval for J&J’s vaccine had been among the fastest to be granted by the FDA. The FDA earlier announced on April 5 that it received an EUA application for the single-dose vaccine last March 31.

Its approval in the Philippines comes as United States regulators paused its use in the country’s vaccine program after 6 women  — out of nearly 7 million recipients — experienced “extremely rare” blood clots within weeks of their shot.

While the US FDA has yet to make a decision on the vaccine, infectious disease expert and White House COVID-19 task force member Dr Anthony Fauci said regulators were likely to resume use of J&J’s vaccine, adding the shot could be brought back with some restrictions on gender and age.

Emergency approval for two more vaccines means the Philippines will have more options for vaccines badly needed as supplies in the country dwindle, while it has yet to complete the inoculation of priority populations, including 1.8 million health workers, 9 million senior citizens, and about 14.5 million adult Filipinos with comorbidities.

The Philippines’ vaccine drive has so far utilized vaccines developed by Sinovac and AstraZeneca, though all 525,600 AstraZeneca doses supplied by the COVAX global facility have already been used weeks ago.

While both the J&J and Bharat Biotech vaccines were now allowed to used in the Philippines, there is still no indicative date when either vaccine will be made available to Filipinos.

The Philippines has ordered at least 5 million J&J vaccines in 2021, with initial delivery expected sometime in July or the 3rd quarter of the year.

Meanwhile, the Duterte government has not signed any agreement to purchase Bharat Biotech’s COVID-19 vaccine Covaxin. Still, Kumaran was optimistic India could supply at least 8 million doses of the vaccine to the Philippines.

This was less than the upper figure of 20 million doses Kumaran said the the Philippines could potentially get last early March, depending on the pace of negotiations and the kind of agreement reached.

With infections still increasing and hospitals overwhelmed by the number of patients seeking care, experts have underscored the urgent need to not only vaccinate all health workers, but scale up vaccinations to cover as many Filipinos as quickly as possible.

How the vaccines perform

The J&J vaccine, unlike most COVID-19 shots, would be a boost to the Philippines’ COVID-19 vaccine campaign as it is administered as a single dose and does not need to be stored in ultra low temperature conditions. This makes the logistics and distribution of the vaccine simpler and more ideal for the Philippines’ health system.

In terms of performance, J&J’s vaccine demonstrated an average of 85% efficacy against severe COVID-19 and 100% efficacy against hospitalization and death across trial sites in the US, the UK, and South Africa. The vaccine was found to have an efficacy of about 66% against moderate to severe/critical COVID-19.

Bharat Biotech’s Covaxin vaccine consists of two doses given 4 weeks apart. The shots can be  stored at standard refrigerated temperatures of 2C to 8C. The shot, widely used in India’s vaccine program has an efficacy rate of 81%, based on preliminary data from its phase 3 trial.

Along with J&J and Bharat Biotech’s shots, vaccines developed by Pfizer and BioNTech, AstraZeneca, Sinovac, and the Gamaelya Research Institute have been cleared for emergency use in the Philippines. – Rappler.com

Editor’s Note: A Rappler graphic, which complements this story, erroneously stated the storage temperature of J&J’s vaccine to be -20°C. This has been corrected and updated to reflect the correct temperature storage conditions of 2°C to 8°C for 3 months.