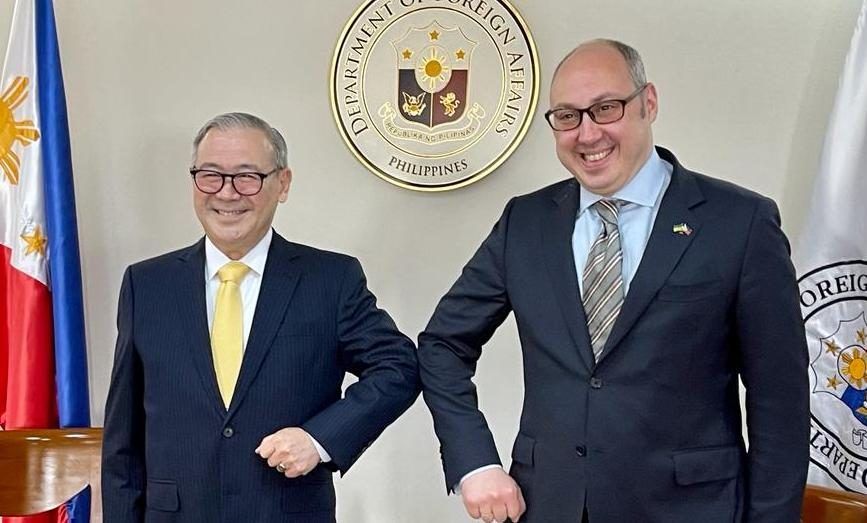 MANILA, Philippines – Philippine Foreign Secretary Teodoro Locsin Jr. announced plans for the Department of Foreign Affairs (DFA) to set up an embassy in Ukraine, where war has been raging for over 100 days since Russian forces invaded in late February.

Locsin made the statement after a meeting held on Thursday, June 9, with Ukrainian Deputy Foreign Minister Dmytro Senik in Manila. The Philippine official described the move as “long overdue.”

“I’m setting up a Philippine embassy of its own to Ukraine but can’t keep my promise to be physically present in Kyiv…. That a heart is with you means nothing if not there to share peril,” Locsin tweeted on Saturday, June 11.

Senik earlier said he had a candid discussion with Locsin which tackled Russia’s war against Ukraine, ways to deepen ties between Manila and Kyiv, and how to boost economic cooperation.

“Glad we are on the same page,” Senik said, adding that he invited Locsin to visit Ukraine.

Before plans to establish an embassy, the Philippines only had an honorary consulate in Ukraine. The Philippine embassy in Poland has jurisdiction over Latvia, Lithuania, Estonia, and Ukraine.

The Philippines earlier voted to support a United Nations General Assembly resolution that condemned Russia’s actions against its neighboring country. Aside from this, Manila voted to suspend Russia from the UN Human Rights Council.

Since then, the Philippines has continued to urge an end to the fighting and called on parties involved to abide by the peaceful settlement of international disputes.

Prior to Russia’s invasion, the DFA counted nearly 380 Filipinos in Ukraine. – Rappler.com