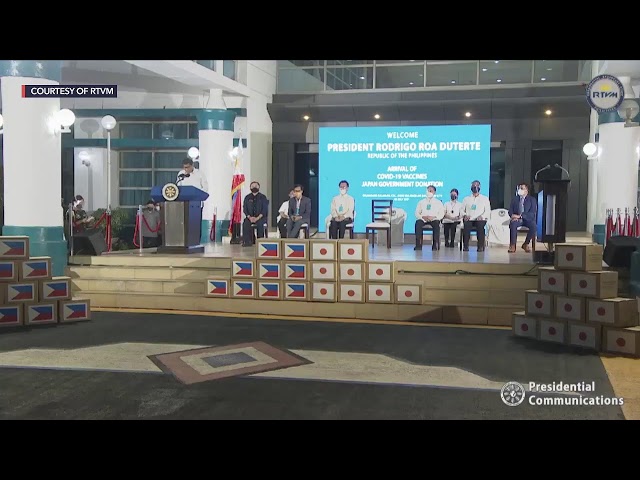 Facebook Twitter Copy URL
Copied
(2nd UPDATE) Japanese Prime Minister Yoshihide Suga says the donation is a testament of its ties with the Philippines, ‘a true friend closer than a brother'

The Philippines received a shipment of over 1 million AstraZeneca doses donated by Japan on Thursday, July 8, as supplies dwindle in the Southeast Asian country where COVID-19 cases continue to increase.

The arrival of 1,124,100 AstraZeneca doses comes just three weeks after the Japanese government announced it would share vaccines with the Philippines as part of its broader assistance to the Association of Southeast Asian Nations (ASEAN).

The shipment arrived past 9 pm at the Ninoy Aquino International Airport and was welcomed by no less than President Rodrigo Duterte, vaccine czar Carlito Galvez Jr., Health Secretary Francisco Duque III, and other Philippine officials. Officials from the Japanese embassy, led by its Chargé d’affaires ad interim Masahiro Nakata, also graced the arrival.

The swift delivery of the vaccine doses will boost the Philippines’ vaccine drive, where demand continues to outstrip supply, prompting local governments to halt vaccinations in the face of shortages of vaccines.

Duterte, in his brief speech, expressed his “heartfelt gratitude” to Japan for the donation and assured Filipinos the government is doing its best to ensure a steady supply of vaccines.

“Japan continues to be our strong partner in various development programs. Our cooperation in fighting the pandemic is truly an indication of the deep friendship between our two countries,” said the Philippine leader.

Galvez earlier said that vaccines donated by Japan would have no restrictions and could be used for all priority sectors currently eligible to receive COVID-19 vaccines, including senior citizens, persons with comorbidities, economic frontliners, and the indigent population.

In sharing doses with the Philippines, Japan expressed optimism it could contribute to the Philippines’ goal of attaining herd immunity and assisting its response to the pandemic.

In a separate statement, Japanese Prime Minister Yoshihide Suga said the arrival of AstraZeneca vaccine doses made in Japan was also a “clear testament to the deep-rooted bonds of friendship” between the two nations. Japan and the Philippines are celebrating 65 years of diplomatic relations and 10 years of strategic partnership in 2021.

“Japan will work to surpass the unprecedented challenges brought about by the COVID-19 pandemic, in unison with the Philippines, a true friend closer than a brother,” Suga said.

Since the start of the health crisis, Japan has provided critical assistance to the Philippines, including personal protective equipment and laboratory surveillance sites. Tokyo also granted billion-peso loans through its COVID-19 Crisis Response Emergency Loan and its Post-Disaster Standby Loan Phase 2 with the Philippines.

Most recently, the Philippines and Japan agreed on a project focused on the development of cold chain facilities and the vaccine rollout in the Philippines.

This grant aid includes the provision of cold chain transport and ancillaries throughout the country. The grant was worth some P313 million (687 million yen) and is part of Japan’s P455.8 million (1 billion yen) cold chain development assistance to the Philippines raised in a phone call between Suga and Duterte in May. – with reports from Pia Ranada/Rappler.com