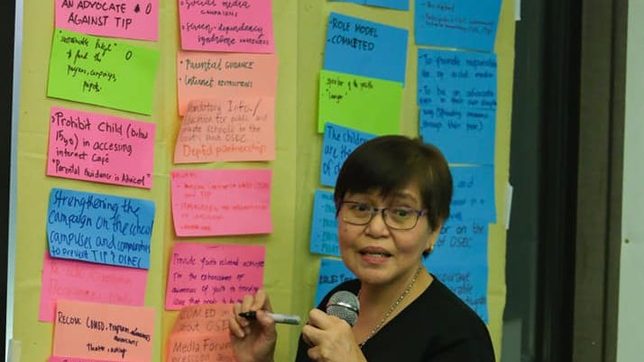 Facebook Twitter Copy URL
Copied
Ujano’s daughter, Karla, says the case is invalid because her mother was serving in a nongovernmental organization at the time of the alleged incident

The Philippine National Police (PNP) on Monday, November 15, claimed that the arrest of women’s rights advocate Ma. Salome “Sally” Ujano was a result of lawful implementation of a warrant of arrest.

“Let me emphasize that this arrest is, foremost, the result of a lawful implementation of a Warrant of Arrest issued by judicial authorities, and her affiliation with the CPP-NPA-NDF (Communist Party of the Philippines-New People’s Army-National Democratic Front) may have been incidental to the criminal case she is accused of,” newly appointed PNP chief Police General Dionardo Carlos said in a statement.

Based on the PNP’s report, Ujano was arrested by joint forces of local police units at 10 am on Sunday, November 14. She was arrested in Barangay Mabolo in Malolos City in Bulacan through a warrant of arrest issued by Judge Virgilio Alpajora of Regional Trial Court Branch 59 in Lucena City for the crime of rebellion.

However, the warrant dated June 28, 2006, was issued almost 15 years ago. The case stemmed from the alleged involvement of Ujano in the ambush of two military personnel in Quezon Province in 2005.

In a Facebook post by Sally’s daughter, Karla said that the case was not valid because her mother was serving as executive director of Women’s Crisis Center in 2005.

(The said case filed in 2005 has no basis because he was actively serving back then as executive director of Women’s Crisis Center. She doesn’t know anything about the case because no information was given to her.)

“Nothing is more audacious than the PNP commending themselves for the unjust arrest of Ujano by reviving an old baseless charge, and labelling her as a most wanted person who has eluded arrest for 15 years. In fact, various organizations that she has worked for the last two decades attest that she has been active and present in the public eye all these years. The PNP is making an utter lie to justify her unjust arrest,” Karapatan Secretary General Cristina Palabay said.

“Common sense and justice must prevail. We call for the immediate release of Sally and an end to the harassment and persecution of women human rights defenders,” WomanHealth Philippines national coordinator Ana Maria Nemenzo also said in a statement.

According to the PNP, a personal nurse was given to Ujano to closely monitor her health since she is already a senior citizen.

Ujano is the national coordinator of the Philippines Against Child trafficking since 2008. She served in the Women’s Crisis Center as mobilization officer from 2006 to 2007, as executive director from 2000 to 2006. – Rappler.com