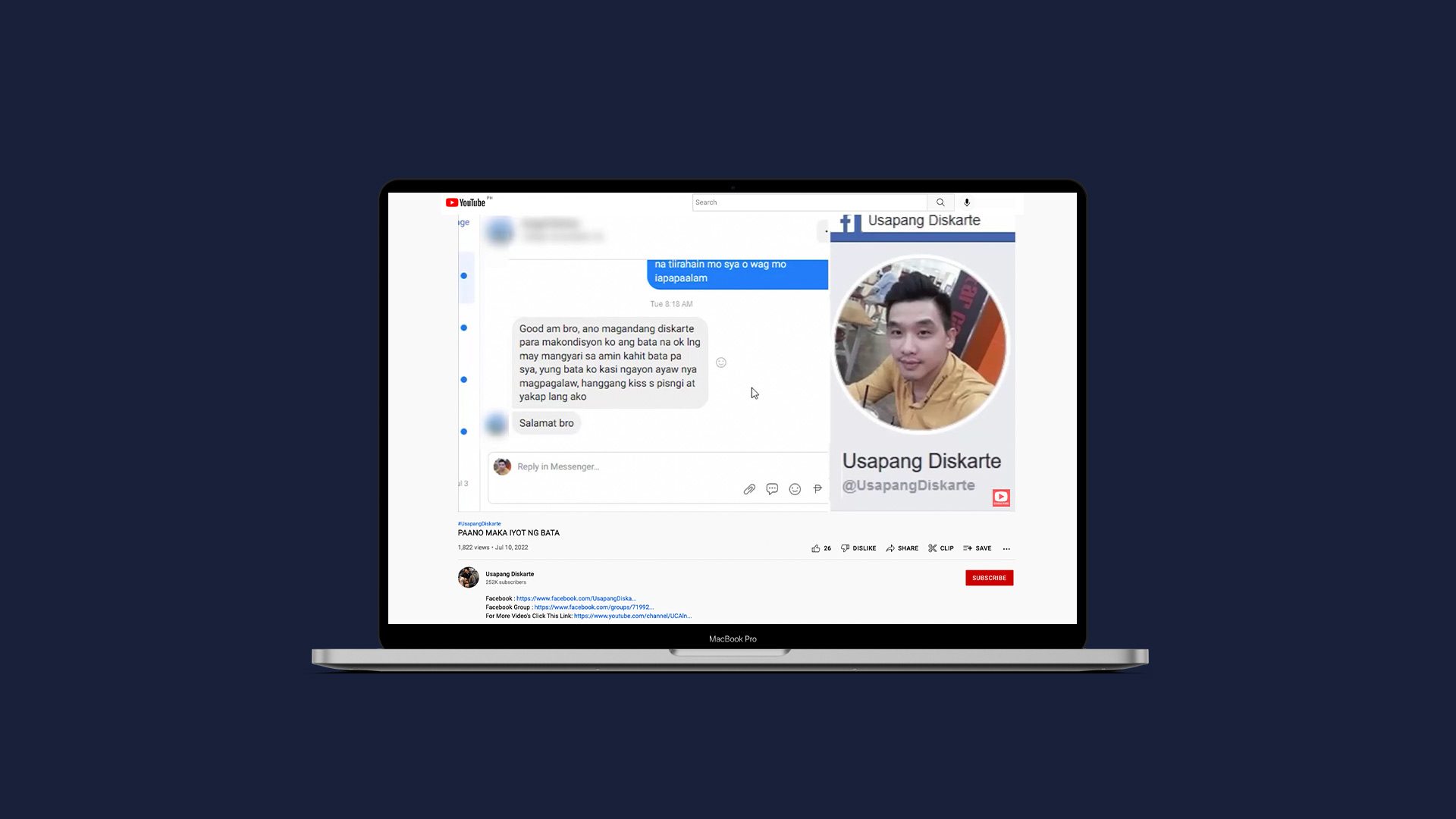 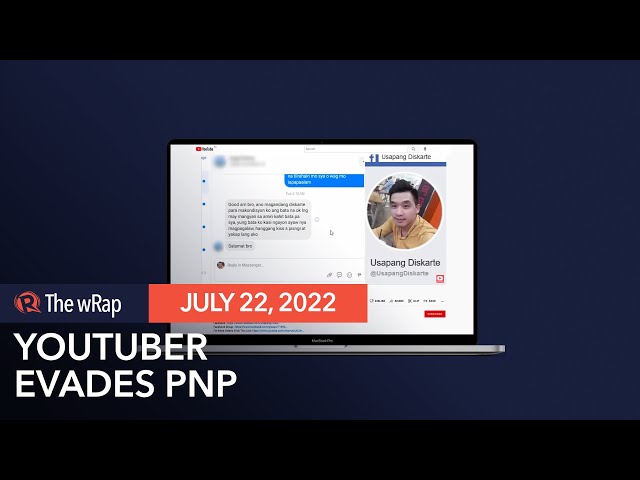 Police Lieutenant Michelle Sabino, spokesperson of the PNP ACG, told Rappler that even before YouTuber “Usapang Diskarte” became viral, they were already monitoring his channel. However, before the police unit was able to engage the predator, his channel was already turned down.

(Now after they found this out, of course, we referred to the cyber security, and then to the women and children cybercrime protection unit. They created social engineering tactics to engage the guy.)

“Unfortunately, bago natin ma-engage si guy is nag-viral (Unfortunately, before we can engage him, the guy became viral, which led to our request and the general public as well to take this down,” Sabino added.

Since Usapang Diskarte’s channel has been taken down, the PNP ACG spokesperson said it would be harder to entrap him.

By the time Usapang Diskarte was taken down, the channel had at least 252,000 subscribers and had been posting content for months.

Based on the data of the PNP ACG, their unit recorded a total of 137 cases of sexual-related child abuse committed on cyberspace from 2019 to June 30, 2022. In the same time period, they also recorded 56 cases of gender-based online sexual harassment, and 120 cases of child pornography.

Around mid-July, social media users sounded the alarm over Usapang Diskarte which created content on seducing minors and objectifying women. This caught the attention of Senator Risa Hontiveros, who urged the passage of the anti-online sexual abuse and exploitation of children (OSAEC) bill.

In one video called “Paano Maka Iy*t ng Bata (How to Have Sex with a Child),” the content creator gave advice to aspiring predators to be patient with children they were grooming.

Advocates and nongovernmental organizations such as EnGendeRights and the Coalition Against Trafficking in Women – Asia Pacific reported Usapang Diskarte to the PNP and the National Bureau of Investigation on July 13. Usapang Diskarte’s YouTube and Facebook pages were then taken down “right after” the reports, according to EnGendeRights.

“It’s appalling that there are accounts like these that teach men how to lure minor girls into sexual activities. It’s very concerning that the YouTube account had over 200,000 subscribers with some bragging about their sexual relationships with minors,” EnGendeRights executive director Clara Rita Padilla told Rappler on Friday, July 15.

Padilla, a lawyer, said that child sexual abusers can be held liable for child abuse, for statutory rape if a child is under 16, or trafficking. Uploading sexual videos of children is also punishable under the anti-photo and video voyeurism act, the anti-child pornography law, and Philippine laws against trafficking and cybercrime, she said.

Is it already a crime to teach how to seduce a minor even if the act itself has not been proven? Padilla said it depends on the content, as there are provisions in the anti-trafficking law that cover promotion of trafficking. She said some provisions in these laws could apply, and police could also check if the creator has standing warrants of arrest for any other crimes he may be violating.

On Wednesday, July 20, Hontiveros warned of more Facebook groups that were seen to have been preying on children as well.

Hontiveros found that the groups, named “Atabs” and “LF Kuya and Bunso,” post images of minors to attract predators. Abusers also used Facebook groups to advertise “thousands” of abusive photos and videos of children on easily accessible messaging apps such as Telegram.

(It’s disgusting and enraging how there are people abusing our children… As a mother, I am more fearful over the security of our children on the internet.)

Hontiveros added that takedowns of abusive content is not enough, as predators can simply make new accounts. “Social media platforms must be proactive in repressing acts that can endanger children,” she said in Filipino.

The viral posts of the groups promoting child abuse coincided when the Philippines was placed on Tier 1 of the United States’ Trafficking in Persons (TIP) Report for the seventh consecutive year. This means that the Philippines meets US minimum standards to curb human trafficking.

Citing law enforcement information, the TIP report said the Philippines is “one of the largest known sources of online sexual exploitation of children, in which traffickers exploit children, individually and in groups, in live internet broadcasts in exchange for compensation wired through a money transfer agency.” The Philippines has long been notorious for being a hotspot of OSAEC.

FAST FACTS: Why online sexual exploitation of children happens in the Philippines

Both foreigners and Filipino men were cited as buyers of commercial sex acts from child trafficking victims, with the traffickers often parents or close relatives operating in private residences or small cyber cafes.

“I believe that we need to really spread awareness and educate parents and children on how to be protected from online abuse and trafficking,” said Charisa Stauffacher, founder of ReGeneration International, a nonprofit organization providing support to survivors of trafficking and sexual abuse.

“Many parents are not afraid because they believe their children cannot be harmed through a phone screen, but the internet has become so much more than this. We must be more cautious and protective than ever before,” she added. – Rappler.com

To report cases of online sexual exploitation of children, contact the following: