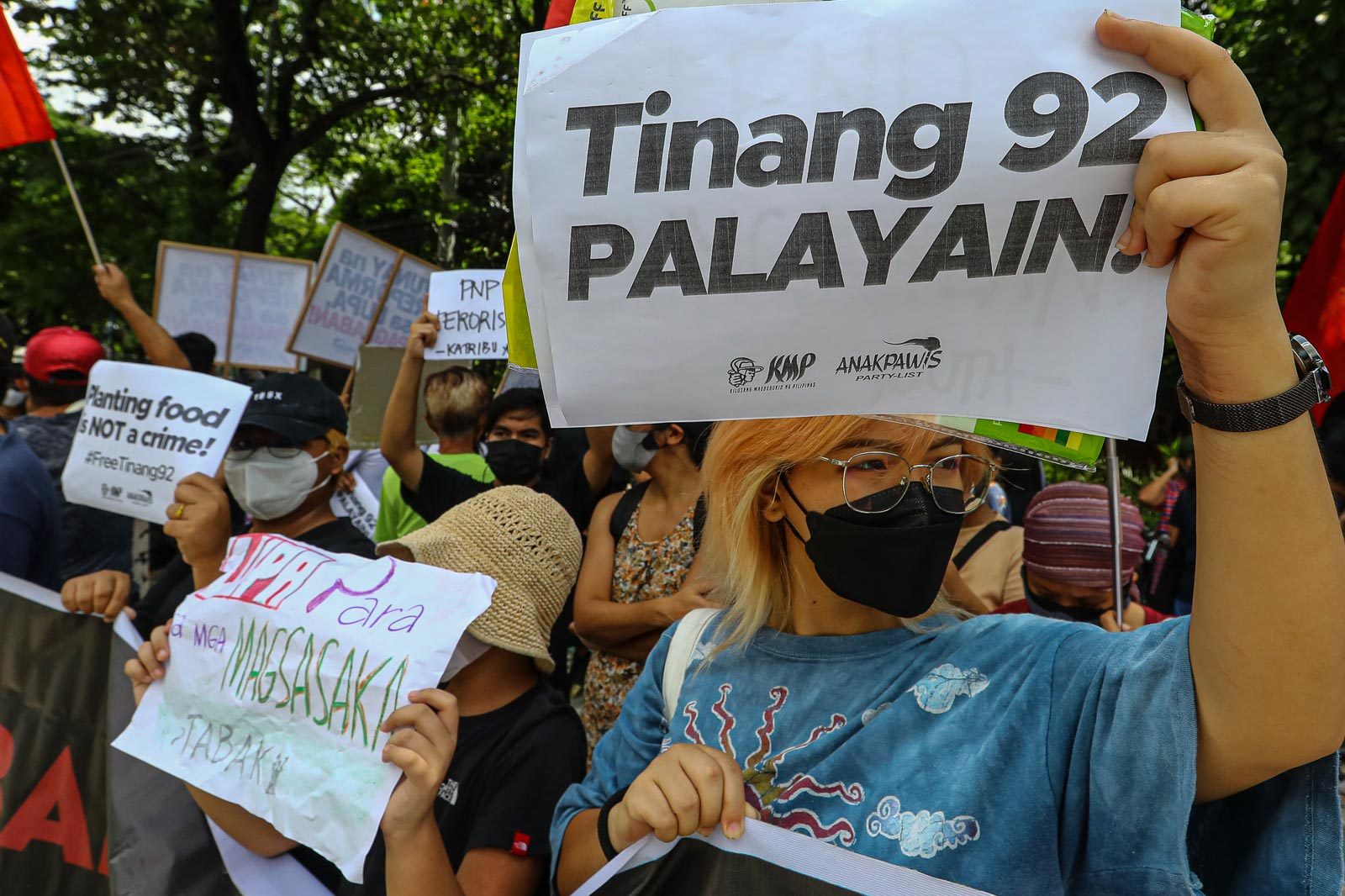 ARRESTED. On the 34th year anniversary of the Comprehensive Land Reform Program (CARP), farmers groups and advocates stage a protest rally at the Department of Agrarian Reform headquarters in Quezon City on June 10, 2022, to condemn the arrest and demand the release of 92 farmers arrested in Tarlac on June 9. The Makisama-Tinang are the rightful holders of Certificates of Land Ownership Award (CLOA) issued to them in 1995 under the CARP. The farmers were arrested when they started to prepare the land for vegetable planting. 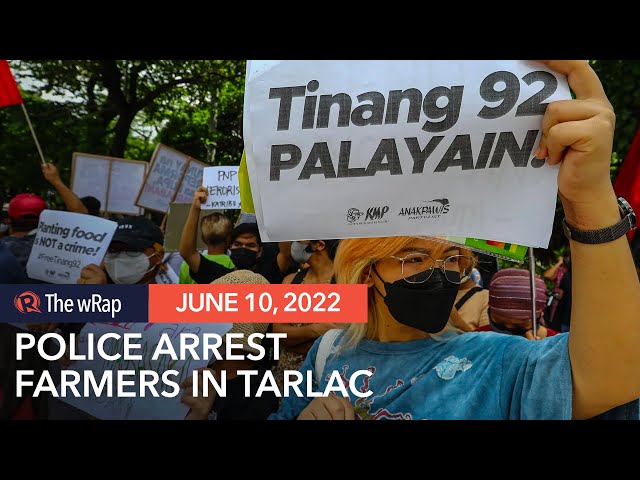 MANILA, Philippines – The police arrested over 90 individuals, including farmers and land reform advocates, in Concepcion town, Tarlac, on Thursday, June 9.

According to peasants group Amihan, the farmers and their supporters were holding a cultivation activity at Hacienda Tinang when they were arrested by the police. The group said some of the arrested were farmers who were beneficiaries of the agrarian reform program in the area.

The arrests were confirmed by the Concepcion municipal police in a phone interview. The local police added that the arrested were now under their custody.

Another group, Unyon ng mga Manggagawa sa Agrikultura (UMA) said a total of 85 individuals from the ranks of farmers and their supporters were arrested. According to UMA, complaints for malicious mischief and obstruction of justice would be possibly filed against them.

As of 9 pm on Thursday, UMA said the mug shots of the detained were being processed at the police station.

Among those arrested was the child of celebrity wedding videographer Jason Magbanua. According to Magbanua, his child was in the area only to help the farmers.

(To the police in Concepcion, Tarlac, please take care of your detainees. Some of them are students. They visited Tarlac without any reason but to cultivate land and help farmers. My eldest child is among them.)

Anakpawis said the farmers were recipients of a 200-hectare land in Hacienda Tinang. The group added that in 2018, the Department of Agrarian Reform decided to install the farmers as legitimate recipients, but the decision was never enforced, said Anakpawis.

The Sama-Samang Artista para sa Kilusang Agraryo (SAKA, Artists’ Alliance for Genuine Agrarian Reform), said in a Facebook post on Thursday that around 50 of their members who joined the farmers “were illegally arrested by Tarlac police for lending support to CARP beneficiaries tilling the farmland granted to them way back 1998.”

SAKA demanded the release of all those detained over the incident, placing their number at 93.

Environmental activist group Kalikasan People’s Network for the Environment (Kalikasan PNE) condemned the arrest and urged the police to free the farmers and land reform advocates as soon as possible.

“We condemn these dirty tactics that seem bent on sabotaging the distribution of the 200-hectare sugarcane estate to rightful beneficiaries,” said Leon Dulce, National Coordinator of Kalikasan PNE.

“We urge public authorities to stop these attempts at sabotaging land reform over Hacienda Tinang’s monocrop sugarcane plantations. These are essentially green deserts that reduce the efficiency and nutrients of land, and it may create a weak and unhealthy plant growth without using an increasing amount of synthetic fertilizers. Redistributing Hacienda Tinang and supporting ARBS (agrarian reform beneficiaries) to alternatively practice agroecology will improve the land area’s agrobiodiversity,” Dulce added.

Kalikasan PNE noted that the agrarian reform beneficiaries “have been tilling the disputed land for three decades, and are looking forward to the Department of Agrarian Reform (DAR) Undersecretary John Lana’s official installation of the ARBs this month.”

“The Dominican Order of the Philippines previously placed Hacienda Tinang under Voluntary Land Transfer under the Comprehensive Agrarian Reform Law,” it added. 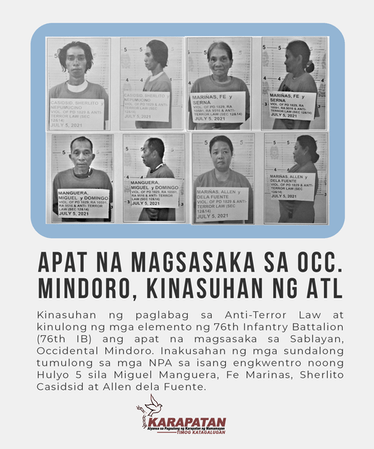 Under the administration of outgoing President Rodrigo Duterte, farmers have also become victims of arrests.

In March last year, at least three red-tagged peasant leaders were arrested in simultaneous operations in Central Luzon during the Holy Week in 2021. In July of the same year, four farmers in Mindoro were also arrested for alleged violation of the draconian anti-terror law. – Rappler.com