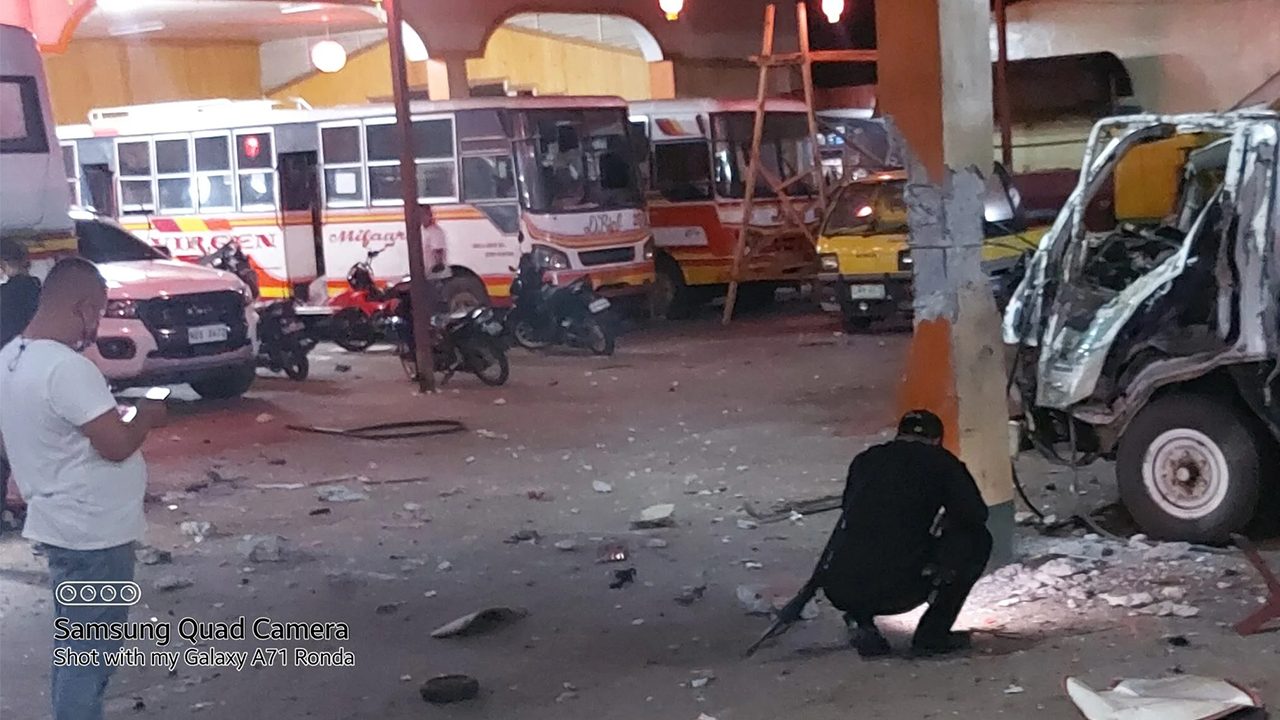 IN SEARCH OF CLUES. An investigator search for clues at the site of an explosion that rocked a bus garage in Basilan.

(Editor’s note:  An earlier version of this story erroneously stated that the explosion took place at a garage in a bus terminal in Basilan. It happened in a garage of D-Biel Transportation Company which is away from the bus terminal. We have corrected this report.)

ZAMBOANGA CITY, Philippines – Two people were hurt in an explosion that rocked a garage of a bus company in Isabela City in Basilan province early Monday night, May 30.

Authorities said the explosive was placed in a box left behind and allegedly entrusted by a woman to a bus conductor.

There was another explosion earlier, between 5:33 pm and 5:45 pm, outside a Jollibee fast food branch but authorities dismissed it as a mere case of faulty electrical wiring, and not a bomb attack.

The explosion at the garage of D-Biel Transportation Company was so powerful that it ripped through the garage and damaged the bus’ rear section, a truck, and shattered the glass windows of at least three parked buses.

It hurt 28-year-old storekeeper Gudilla Francisco and a guard identified as Christopher Pasaol.

Gobway said the 42-year-old guard checked the approximately three-kilogram box that was marked “Tanduay Rhum,” and tightly wrapped with a packaging tape.

Gobway said Pasaol became suspicious, inspected it, and then left it on the same spot behind a bus that bore the number 81.

The bomb went off a minute later, hurting the storekeeper and the guard, according to Gobway.

Francisco was rushed to the Basilan General Hospital while the guard suffered a head wound after he was hit by shrapnel.

Gobway said investigators from a police bomb squad and the local Scene of the Crime Operatives (SOCO) were still trying to figure out “the nature of the explosion,” and the type of explosive used.

“Everything is fine. We’re requesting everyone to please stay at home,” Salasim said.

(Our city and the entire province of Basilan have been peaceful for quite a time now. Our economy has continuously progressed, and our lives have become better. Let us help one another in sustaining these, and let us show everyone that no threat can stop us from getting up.) – with reports from Richard Falcatan/Rappler.com

Despite vaccine rollout woes, ‘Isabela City should not be left behind’