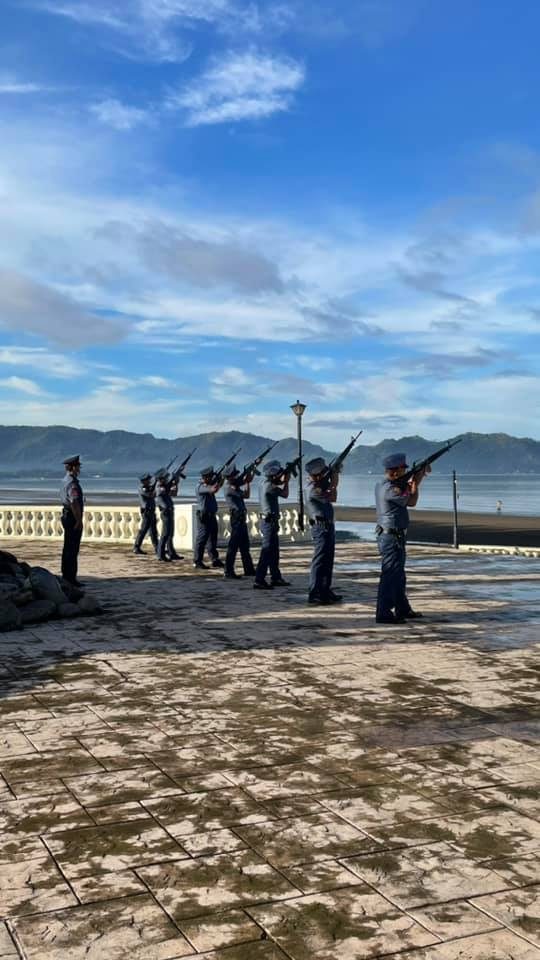 In this city proud of being the place where Jose Rizal introduced his ideal society – “where God-fearing people love and take care of each other” – irresponsible politics has again disrupted events, resulting in two separate commemoration programs on Wednesday, December 30.

At 7:07 am, a squad of policemen performed the 21-gun salute at Jose Rizal’s landing site to start the commemoration. Barely able to reload, the cops rushed to the nearby Rizal Shrine to fire their M16s again before another gathering of officials and people who profess belief in Rizal’s teachings.

Dapitanons largely believe that the 21-gun salute every December 30 is actually a reenactment of Rizal’s death by firing squad. And the two sets of gun salutes made a lot of people here to ask: “Why was Rizal shot twice?”

At first, there was only one commemoration program, which was prepared by Sofia Bagolboc, OIC-Curator of Rizal Shrine, and approved by the National Technical Committee of Rizal Day Celebration under the National Historical Commission of the Philippines (NHCP).

On the side of the City Government of Dapitan, Mayor Rosalina G. Jalosjos issued on December 23 a memorandum ordering her officials and employees to attend the program in Filipiniana attire, and lent chairs and sound system to the Rizal Shrine.

Why did Adele use outdated flip phone in ‘Hello’?

However, Jalosjos said she got irate upon receiving the invitation and program because Bagolboc did not coordinate with her office on the official invitees and the flow of the program. In that program, Governor Roberto Uy – patriarch of the Jalosjos group’s mortal political rival – was listed to lay a wreath ahead of the mayor.

“Wala silay respeto (They are disrespectful),” Jalosjos told Rappler in an interview on Wednesday over mobile phone. “The Rizal Shrine is under NHCP, fine, but it is also under my jurisdiction. I should have been informed at least so I can also suggest on the flow of the wreath-laying.”

Jalosjos claimed that Bagolboc may have been influenced by City Councilor Gabriel Cad, former member of the Jalosjos group who recently joined Uy’s side. Both Jalosjos the mayor and Uy the governor are on their last terms, and the governor is persistently rumored to be running for mayor in Dapitan.

“(Cad) has obviously an intention to harm our political posture in Dapitan,” Jalosjos said.

Cad denied this, saying, it “was the NHCP that instructed Sofia (Bagolboc) to invite the governor, not me. Wala ko namolitika, sila hinuon (I’m not playing politics, they are).”

Meanwhile, Ryan Tan, curator II of NHCP, told Rappler that Bagolboc, being the ground official, should be “very careful on protocols” and must have briefed the national technical committee on Rizal Day Celebration on the political dynamics of Dapitan.

“I told the committee to be careful with the ticklish politics in Dapitan, but obviously it did not reach Bagolboc,” said Tan, who was assigned OIC-curator of Rizal Shrine in Dapitan for a few months until the COVID-19 pandemic.

Late afternoon on Tuesday, December 29, the City Government of Dapitan recalled its chairs and sound system from Rizal Shrine and transferred these to Rizal’s Punto de Disembarco in Barangay Sta. Cruz, where Jalosjos ordered the local government would hold its own commemoration program.

At the Rizal Shrine, Cad said in his speech that there were only 4 areas acknowledged by the NHCP where Rizal Day commemoration may be held – “those are Luneta, Fort Santiago, Calamba Shrine, and the Rizal Shrine in Dapitan” – insinuating that any commemorative program held outside the shrine is fake.

Jalosjos acknowledged that Punto de Disembarco may be outside the Rizal Shrine, “but it is where Rizal landed. Practically all of Dapitan should be the legitimate place of any events in memory of our hero.”

The mayor added that even the wreath sent by President Rodrigo Duterte was laid at Punto de Disembarco.

Meanwhile, other national offices sent wreaths both at the Rizal Shrine and Punto de Disembarco to avoid offending any political group.

The events compelled a lot to question Rizal’s significance today.

“Why it has to happen that way?” Judge Chad Martin Paler of Municipal Trial Court in Cities in Dipolog asked while shaking his head in disbelief. The irony is that Uy – the center of commemoration bickering here – snubbed the Dapitan invitation, and instead attended Dipolog City’s memorial program as he used to do in his two terms as governor. – Rappler.com