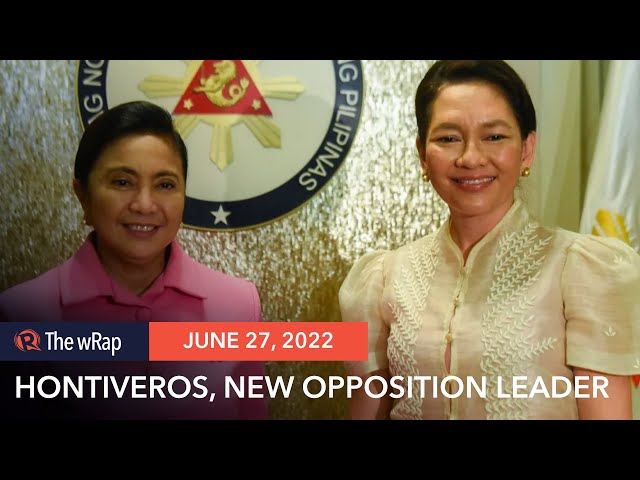 MANILA, Philippines – Inside the near-empty lobby of the office she would vacate in three days, Vice President Leni Robredo gave a tight hug to the woman who would be taking the cudgels on behalf of the opposition from now on: reelected Senator Risa Hontiveros.

A handful of their staff clapped their hands as Robredo finished administering Hontiveros’ oath on Monday morning, June 27, one of Robredo’s last few official acts as the second highest official of the land.

By noon on Thursday June 30, Robredo will be vice president no more.

But her office at the Quezon City Reception House will be welcoming its new occupants, vice president-elect Sara Duterte and her team, as early as Wednesday, June 29. Robredo plans to leave the QCRH for good a day earlier than the day her term is supposed to end, to give more time to her successor to begin setting up office.

Hontiveros’ oath-taking was merely ceremonial, but it means much to the Philippine opposition movement that Duterte crushed in the past six years.

Hontiveros was the sole opposition senatorial candidate who won in the 2022 elections, making her the movement’s de facto leader under the incoming presidency of the late dictator’s son, Ferdinand Marcos Jr.

This has always been clear to Robredo as early as May 9, when the election results showed she finished only second place in the high-stakes presidential polls. Her running mate Senator Kiko Pangilinan lost his own race, and so did most of their senatorial candidates.

Robredo would repeat this on Monday, as she wore a long-sleeved pink suit, her campaign color, as she stood in front of the Office of the Vice President’s seal.

(Let me repeat that today, Sen. Risa, that you are now the highest elected official in the opposition, and we are all happy that it’s you who will continue bearing our flag.) 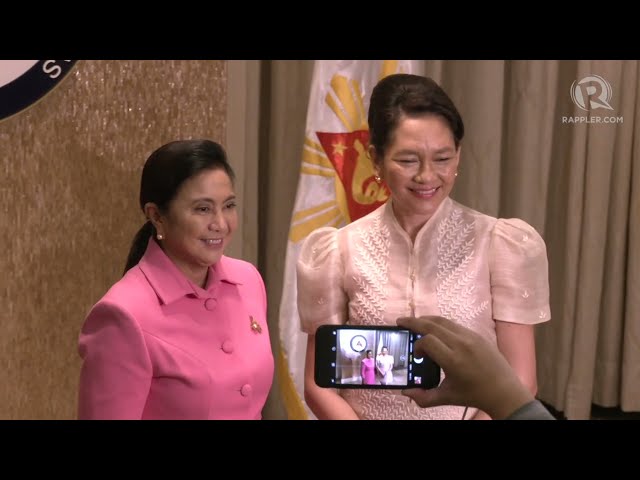 (We are confident that you will continue to fight for everything that we believe in, for what is good and right in governance. We will always be here to support you. We’re your soldiers now, Sen. Risa.)

The challenge ahead was not lost on Hontiveros, who spoke of her promise to protect the people’s constitutionally-protected rights, in an age where lies and propaganda have festered on social media and seeped into the minds of Filipinos.

“We will not tolerate people who bear false information. We will fight back harder, against rumors, lies, propaganda, and fake news,” said Hontiveros.

“Let me make this even clearer, this is a stern warning to all the dubious characters in the fake news universe: This time, we will not let your reckless disregard for truth slander our democracy – our country – ever again,” she added.

Key opposition figures like Robredo and Hontiveros became the punching bags of trolls and propagandists in the past six years under the Duterte regime.

They committed the fatal mistake of not acting early enough to push back against these lies – one of the main reasons why the opposition suffered defeats in the 2019 midterm elections and the 2022 national polls.

Robredo herself plans to lead efforts to counter the disinformation plague once she steps down from office. She is set to launch on July 1 the Angat Buhay non-governmental organization, which she eyes to be the “biggest volunteer movement” in the country.

Hontiveros also earlier said in her interview with Nobel Peace Prize winner and Rappler CEO Maria Ressa that there is a need to make Filipinos care about protecting democracy again.

For Hontiveros, pushing back in the age of online disinformation is about waging a fight both on the ground and online.

“Being active citizens offline also requires sections of our population to be active and activist citizens online against fake news and trolling and every other evil spawn it has given birth to,” she said.

Hontiveros also plans to continue championing her advocacies in her second term as senator, which include women empowerment, LGBTQIA+ rights, and uplifting the lives of the poor. So far, she is one of only two senators  in the next 19th Congress who plan to join the Senate minority bloc, the other being Senator Aquilino Pimentel III. – Rappler.com