Sexist jokes are Duterte’s way of coping with disasters – Roque (You can’t deny it from him because he was looking for a little break after the consecutive tragedies he saw from the calamities of places he visited.) 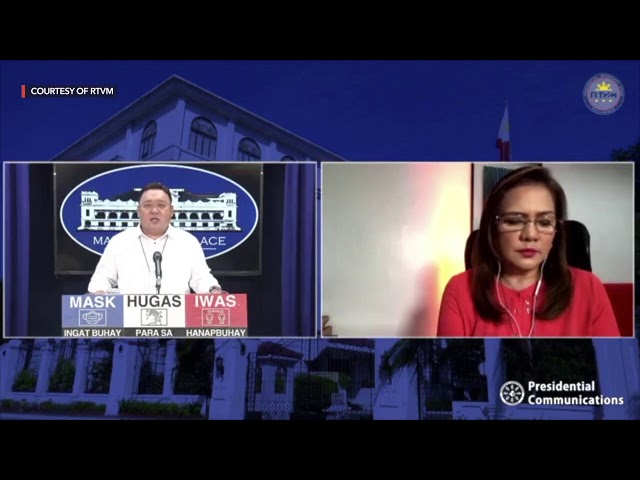 Roque even said this manner of finding solace from tragedy is common among Filipinos.

(It’s the attitude of Filipinos that, though we may go through so much hardship, we still try to lighten our problems. So this is not just something only the President does.)

No other government official or typhoon victim has made sexist jokes on television as a response to a series of disasters in the past weeks.

Still, Roque said the public should “not read anything beyond the fact” that Duterte supposedly just wanted to “lighten the mood” of a meeting that tackled the rising Typhoon Ulysses (Vamco) death toll, billions of pesos worth of agricultural damage, and submerged barangays.

(Let’s let it be. Let’s give our President a chance to have a light moment.)

What did Duterte say?

Duterte and other government officials had joked about being “undersexed” during a post-calamity situation briefing in Pili, Camarines Sur, on Sunday, November 15.

Duterte had joked with Presidential Adviser for Bicol Affairs Marvel Clavecilla about having too many women, to which Clavecilla replied that he was “undersecs,” a word play on his official title of undersecretary.

Duterte had also implied that an official he knew had died of COVID-19 because he “lacked women.”

Theresa de Vela of the Women and Gender Institute (WAGI) condemned Duterte’s and Roque’s remarks, saying they are a step back in the country’s efforts to fight sexism.

“It would seem both Mr Duterte and Mr Roque need to be reminded that we have a Bawal ang Bastos law that clearly prohibits sexist remarks, regardless of motive,” she told Rappler.

She said women often carry the burden of taking care of their families during and after typhoons.

No end in sight for Duterte’s sexism

Duterte’s sexist jokes have been a long-standing issue, even since the start of his 2016 presidential bid when he had sparked widespread outrage for saying he wished he had raped a “beautiful” Australian missionary killed in a prison riot in Davao City.

As President, and during official televised speeches, he has joked about shooting communist rebels in the vagina and has blamed rape incidents on the appearance of women.

Feminist groups have condemned these remarks, even as the Palace tries to project Duterte as a champion of women’s rights.

Whenever he faced outrage for his sexist jokes, Duterte would say he was exercising his right to free speech. – Rappler.com