Facebook Twitter Copy URL
Copied
(5th UPDATE) Russia calls its actions a special military operation to disarm its neighbor and dislodge leaders it calls neo-Nazis. Kyiv and its Western allies say this is a baseless pretext to invade a country of 44 million people. 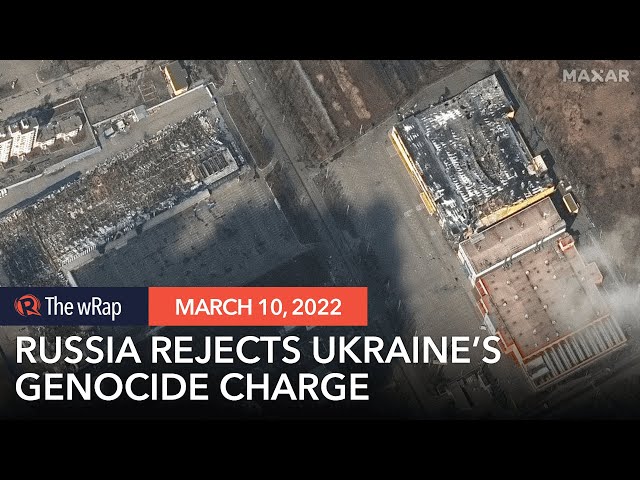 Ukraine said on Thursday, March 10, Moscow had ignored its plea for humanitarian access to rescue hundreds of thousands of civilians trapped under bombardment, as the opposing sides yielded nothing at the highest level talks since the Russian invasion began.

Russia’s war in Ukraine entered its third week with none of its stated objectives reached, despite thousands of people killed, more than two million fleeing the country and thousands cowering in besieged cities under relentless bombardment.

Local officials in Mariupol, a Ukrainian port under siege for 10 days, said Russian warplanes were again relentlessly bombing the city, a day after destroying a maternity hospital, in what Kyiv and Western allies called a war crime. Moscow said the hospital was no longer functioning and had been occupied by Ukrainian fighters.

“I made a simple proposal to Minister Lavrov: I can call my Ukrainian ministers, authorities, president now and give you 100% assurances on security guarantees for humanitarian corridors,” he said.

“I asked him ‘can you do the same?’ and he did not respond.”

At his own simultaneous news conference in a separate room, Lavrov showed no sign of making any concessions, saying the operation was going to plan and repeating Russian accusations that Ukraine posed a threat to Russia.

Lavrov said Kyiv appeared to want meetings for the sake of meetings, and that a ceasefire was not meant to be on the agenda at Thursday’s talks.

Russia calls its actions a special military operation to disarm its neighbor and dislodge leaders it calls neo-Nazis. Kyiv and its Western allies say this is a baseless pretext to invade a country of 44 million people.

Aid agencies say humanitarian help is most urgently needed in Mariupol, a city of 400,000 before the war, where residents have been trapped with no food, water or power.

“We try and try and try, but I’m not sure if it’ll be possible today – or other days,” he said.

“Air strikes started from the early morning. Air strike after air strike. All the historic center is under bombardment,” he said. “They want to absolutely delete our city, delete our people. They want to stop any evacuation.”

Lavrov said the hospital struck on Wednesday had stopped treating patients and had been occupied by Ukrainian “radicals”. The Kremlin was more circumspect, saying the incident was being investigated.

“What kind of country is this, the Russian Federation, which is afraid of hospitals, is afraid of maternity hospitals, and destroys them?” President Volodymyr Zelenskiy said in a televised address late on Wednesday, after posting footage of the wreckage.

Lavrov accused Western countries of inflaming the situation by arming Ukraine. Asked if the conflict could lead to nuclear war, he said: “I don’t want to believe, and I do not believe, that a nuclear war could start.”

Moscow’s stated objectives of crushing Ukraine’s military and removing its leaders have remained out of reach, with
Zelenskiy unshaken and Western military aid pouring across the Polish and Romanian borders.

Russian forces have advanced in the south but have yet to capture a single city in the north or east. Western countries have said they believe that after a planned lightning strike on Kyiv failed in the early days of the war Moscow has turned to tactics involving far more destructive assaults.

Britain’s Defense Ministry said on Thursday that a large Russian column northwest of Kyiv had made little progress in over a week and was suffering continued losses. It added that as casualties mount, Russian President Vladimir Putin would have to draw reinforcements from across the armed forces.

Western-led sanctions designed to cut off the Russian economy and government from international markets have bitten hard, with the rouble plunging and ordinary Russians rushing to hoard cash.

London blacklisted more Russian businessmen on Thursday, including Britain’s best-known, Roman Abramovich, owner of Chelsea soccer team. An asset freeze would block an attempt to sell the club, but a special license would let it keep playing.

The pounding of Mariupol underscored US warnings that the biggest assault on a European state since 1945 could become increasingly attritional after Russia’s early setbacks.

The White House condemned the hospital bombing as a “barbaric use of military force to go after innocent civilians”.

The U.N. Human Rights body said it was trying to verify the number of casualties, while voicing “deep concerns about indiscriminate use of weapons in populated areas.”

Russia has repeatedly pledged since Saturday to halt firing so at least some trapped civilians could escape Mariupol. Both sides have blamed the other for the failure of the evacuations.

Half of the more than 2 million total refugees from Ukraine are children. The International Committee of the Red Cross said houses had been destroyed all across Ukraine. “Hundreds of thousands of people have no food, no water, no heat, no electricity and no medical care,” it said.

Survivors of the worst-hit cities are among the refugees, many suffering physical injuries and psychological trauma. At the Polish border, Valera, a grey-haired carpenter in his 50s and one of few men to cross from Ukraine where those of conscription age are generally obliged to stay, looked on nervously as his daughter Anna was carried on a stretcher.

It was two days since they had left Kharkiv, where Anna, 24, who has cerebral palsy, broke her leg as they ran to a bomb shelter.

“There is positional fighting during the day, air raids in the evenings, they are shelling from everything, fighter
aircraft,” he said. “The center is ruined, the outskirts have already been bombed.” – Rappler.com