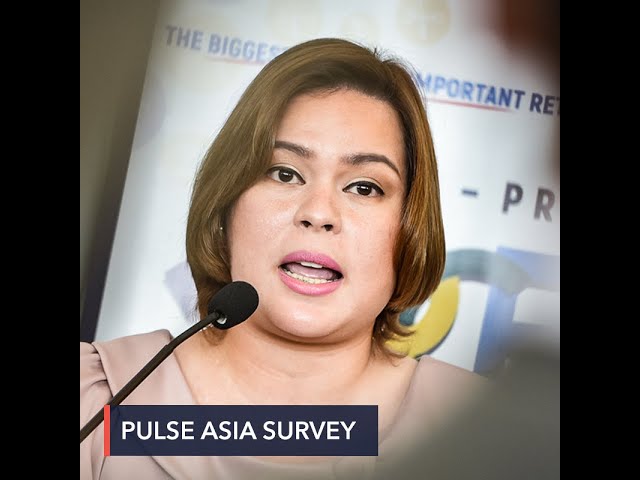 Davao City Mayor and Presidential daughter Sara Duterte emerged as a prospective frontrunner in the upcoming 2022 Presidential elections, according to a survey of Pulse Asia Research, Incorporated released on Thursday, December 31.

The survey, conducted from November 23 to December 2, showed that if elections were held during the polling period, about a quarter of Filipino adults (26%) would support a probable presidential bid by Sara Duterte.

The polling firm’s survey is the first to be published on the 2022 elections.

Prior to this, Duterte had spoken of Sara as a possible presidential candidate on several occasions. Last June, his latest remarks saw him teasing that Sara should seek the highest office if she could “take the heat” and serve the nation.

Pulse Asia found that a small majority of Mindanawons (58%) as well as small pluralities in the Visayas (29%) and Class D (26%) expressed support for the presidential daughter.

Meanwhile, 4% of Filipino adults said they either did not know yet, refused to state, or would not vote for anyone as the nation’s chief executive.

If elections were held during the polling period, 3 figures would be statistically tied for vice-presidential post: Moreno (17%), Sara Duterte (16%), and Senate President Vicente Sotto III (14%).

Meanwhile, Pulse Asia found that 58% of Filipino adults were already able to name 12 individuals they were “inclined to elect” to the Senate, most of whom were either incumbent or former lawmakers.

Topping the list was Pacquiao, with a voter preference of 62%. In 2nd to 3rd would be Raffy Tulfo (54%). Tulfo is closely trailed by Sara Duterte in 2nd to 4th, Pulse Asia said, with 50.9% of voter support.

Behind them were the following:

Issues and controversies during the survey period include the onslaught of Super Typhoon Rolly and Typhoon Ulysses, release of Pfizer and Moderna’s vaccine trials showing high efficacy results, Senate approval of the 2021 budget, Duterte’s creation of an anti-corruption task force, and US Presidential elections, among others. – Rappler.com