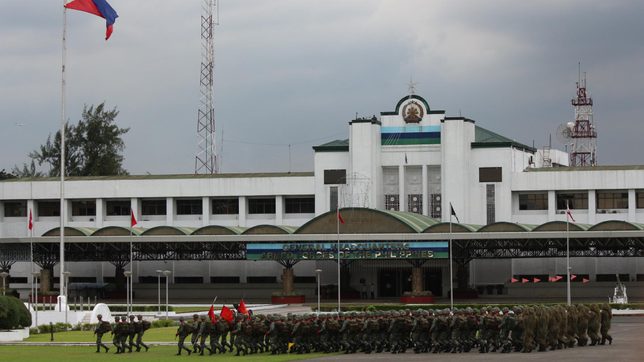 CAMP AGUINALDO. Soldiers at the headquarters of the Armed Forces of the Philippines.

Facebook Twitter Copy URL
Copied
Senate Bill No. 2376 also prohibits the appointment of a former military officer as defense chief within a year of retirement or resignation

The Senate on Monday, September 27, passed on final reading a bill that seeks to impose a fixed three-year term for the Armed Forces of the Philippines (AFP) chief and other top military officers.

Senate Bill No. 2376 was unanimously passed on third and final reading after 23 senators backed it.

The bill aims to enhance the professionalization in the military by “strengthening the merit system and allowing the new leadership a longer period to implement reforms and institutionalize sound policies that will redound to the improvement of the organization.”

If passed, the measure would impose a fixed term of three years on the AFP chief, vice chief of staff, deputy chief of staff, and the commanding generals of the Army, Navy, and Air Force. The bill would also cover the military’s inspector general, as well as the chiefs of unified commands.

Under the proposed measure, these key officers would retire after the completion of their fixed term, regardless of age. At present, the mandatory retirement age is 56.

The fixed term, however, could be affected by scenarios such as promotion to AFP chief, relief from the post, or not occupying any position in the AFP Table of Organization.

The bill also sets a tour of duty of four years for the superintendent of the Philippine Military Academy (PMA), who would not be allowed to hold any other position in the AFP and would be compulsorily retired upon the completion of the term.

For officers holding the ranks of second lieutenant, ensign to colonel, and captain, there would be a compulsory retirement age of 56 to 59 or an accumulation of 30 years of “satisfactory active duty,” whichever comes earlier.

The bill also seeks to impose a retirement age of 59 or the maximum tenure in grade, whichever comes earlier, for military officers with the ranks of brigadier general, commodore to lieutenant general, and vice admiral.

The bill also prohibits retired or resigned AFP officers from being appointed as secretary of defense within a year of his/her retirement or resignation. According to Senator Panfilo Lacson, a former police general, the measure would guarantee professionalization in the military.

“The proposed stricter attrition system guarantees the succession of qualified and effective leaders in the AFP. This places a premium on professionalization and merit-based promotion and weeds out lame ducks in our military circles,” Lacson said in a Monday statement.

Closing the ‘revolving door’ at AFP

The bill seeks to set a fixed term for top military officers to remove the prevailing “revolving door policy,” or appointing AFP chiefs to serve only for a short time – some even just months – or until their mandatory retirement. (READ: Quickie generals: The military’s revolving door needs to be shut)

The policy has been practiced since the time of then-president Corazon Aquino, and has continued under President Rodrigo Duterte, who appointed his 10th – but not the last – AFP chief on July 31, General Jose Faustino Jr. who will serve for only four months, or until November 2021.

In his five years in office, Duterte has appointed 10 military chiefs so far – rivaling the 11 AFP chiefs named by Gloria Macapagal Arroyo in her nine-year presidency.

Defense Secretary Delfin Lorenzana had earlier said that the short term of AFP chiefs is “not good” for the military. The defense chief added that since the AFP chief has short terms, the organization “sometimes loses its direction.” – Rappler.com