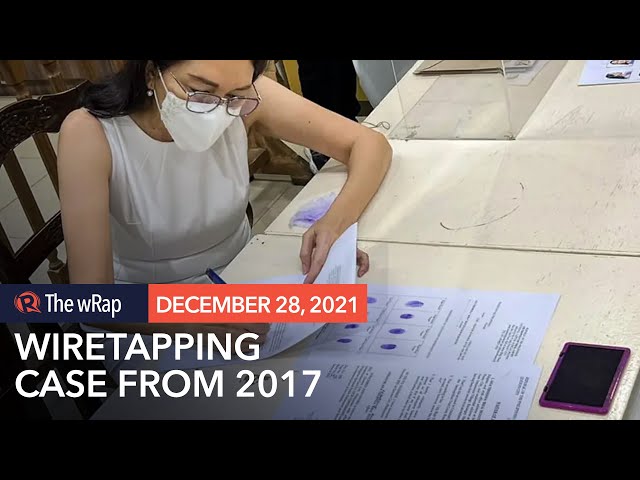 Hontiveros paid P36,000 at the Metropolitan Trial Court, following the release of the arrest order against her on Monday, December 27.

In a statement, Hontiveros repeated her call for the dismissal of the case as it was “worthless and baseless.” The senator said she was surprised that a case from 2017 suddenly moved forward. (READ: Aguirre files wiretapping complaint vs Hontiveros)

“If there is anyone who violated the law, it is Mr. Aguirre, along with his men, who we caught cooking up a case against me,” Hontiveros said.

What’s the case about?

Hontiveros was accused by then justice secretary Aguirre of wiretapping in October 2017, after Hontiveros, in a privilege speech, publicized a photo of Aguirre texting at the Senate during its probe on the killing of Kian delos Santos.

Zooming into the photo, Aguirre was shown to have texted Volunteers Against Crime and Corruption (VACC) member Jacinto “Jing” Paras to “expedite the cases” against Hontiveros. At the time, there were no complaints filed against Hontiveros, and as of December 2021, the VACC has not filed any complaints against her.

Aguirre claimed the photo was not accidentally taken as claimed by Hontiveros, and that he could prove it through experts’ opinion. Named as his witness in the criminal complaint before the Pasay City Prosecutor’s Office is Cristopher Malinao from the Federation of Philippine Photographers Foundation (FPPF).

“Why is it my fault that the Filipino people know there is a conspiracy against me? If his text messages were set in fonts large enough to be caught on camera, then he has only himself to blame. He should have known better than to conspire with others in the middle of a public event, in full view of photographers’ cameras. There was no deception or subterfuge involved,” Hontiveros said. – Rappler.com