Duterte, donning a camouflage shirt with its long sleeves rolled up to his elbows, presided over a televised meeting with his Cabinet and local officials where he gave a speech and handed down orders.

Duterte’s meeting lasted around an hour and a half, before he declared he was going to Legazpi City in Bicol – home region of Robredo that is also an area battered by Ulysses. “Si Leni, tagaroon ‘yon, mag-courtesy call tayo sa kanya (Leni is from there, let us pay her a courtesy call),” Duterte quipped. 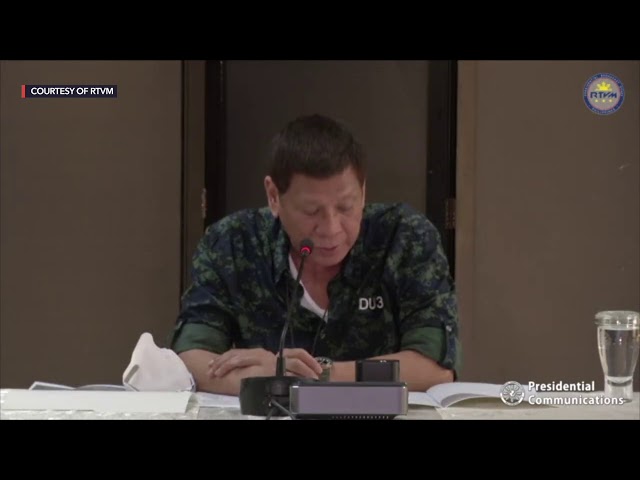 On the same day, however, Robredo was walking around evacuation centers in Tuguegarao City, handing out plastic bags of supplies with her hair tied back.

The Vice President arrived in Cagayan at 9 am on Sunday.

The two leaders tackled the problem in different ways.

This is the job of Environment Secretary Roy Cimatu, who has been waging a campaign against illegal mining and logging as early as March 2018. Even so, Duterte said Cimatu should “devise a way” to end them for good.

As interior secretary, Año can remind mayors to enforce environment laws in their territories. Failure to comply can lead to administrative cases that may lead to suspensions from office.

Cimatu said a massive tree-planting activity is a possible solution. The problem so far, he said, is that the denuded lands are private property.

Cimatu said the project can be in cooperation with local government units and they can target millions of trees to be planted.

Robredo, on the other hand, has focused on coordinating with different government agencies, local governments, and the military for aid and rescue.

For a time, in fact, her Twitter account was the main source of information about the flooding in Cagayan, which critics said caught the Duterte government off-guard.

‘A means of unloading’: Roque sings in Baguio as Cagayan towns are flooded

Robredo on Sunday also stressed it is important for public officials to make their presence felt in times of disaster.

“Mahalaga na nakikita iyong mga opisyal sa ganitong mga pagkakataon para naman alam nila na hindi sila papabayaan (It is important that officials are seen by the people so they know that they are not being abandoned),” Robredo said.

The Vice President was also asked about her getting to Cagayan ahead of Duterte on Sunday.

Robredo has been praised for her involvement in the disaster response despite her office’s measly budget. On Twitter, the hashtag #LetLeniLead trended over the weekend.

Duterte, on the other hand, has been slammed by critics for his perceived slow and distanced response to the crisis, with #OustDuterte and #BangonDuterte trending on Twitter on separate days.

According to latest count of the National Disaster Risk Reduction and Management Council (NDRRMC) on Sunday morning, November 15, Ulysses has claimed at least 67 lives and injured at least 21 others.