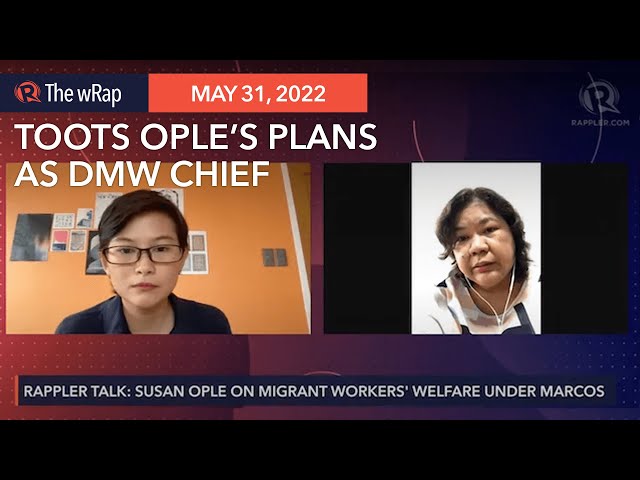 Ople explained her plan in a Rappler Talk interview on Monday, May 30, a month before the start of the Ferdinand Marcos Jr. administration. Ople, a longtime OFW rights advocate, will be only the second DMW secretary since the agency was created through a law signed by President Rodrigo Duterte in 2021.

She will be the first DMW secretary with a budget as the agency is set to get its first General Appropriations Act allocation in the 2023 national budget yet.

“I’m pretty confident in the incoming administration. We will strive to do our best for our OFWs and their families as well,” said Ople, after talking about the two meetings she’s had with president-elect Marcos about his marching orders for her department.

These are some of the plans and reforms Ople spoke about during the interview: 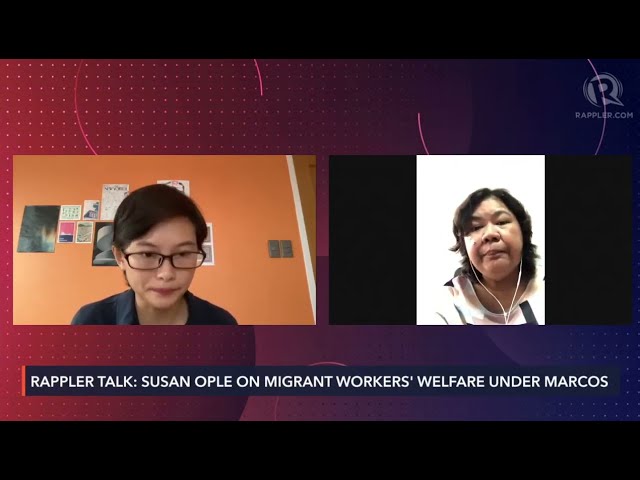 “I’ve been touching base with people I respect and I know are very active in labor migration,” she told Rappler.

One goal of the systems review Ople hopes to conduct is to reassess the need for certain permits or fees that OFW groups have long complained about.

The Overseas Employment Certificate (OEC), for instance, is one cost borne by migrant workers but is necessary as a way for the government to track them and thus ensure better services. But Ople says it should be improved.

The need to pay PhilHealth contributions is also one requirement Ople wants to review and hold consultations on.

“I have always been belaboring the point that most OFWs have health insurance in the destination countries so I would really like to have a dialogue with our legislators and also with PhilHealth because it’s such an enormous burden…. But I’m not in the position now to promise that when we assume the post, this is what will happen because it should be a product of dialogue with stakeholders and with our partners in Congress and also in the executive branch,” said Ople.

Philippine Overseas Labor Offices (POLO) are supposed to be OFWs’ go-to Philippine government agency abroad, especially to respond to emergencies or abuses. But many migrant workers complain about POLO personnel who don’t respond to their calls or who ignore their concerns.

Her solution is two-fold: ensure POLO staff are competent and qualified by subjecting them to a more rigorous screening process, including an exam; and giving adequate assistance to them when on the job.

The functions of POLOs, under the law that created the DMW, will be placed under Migrant Workers Offices.

“I think one area we need to develop is a ‘caring for carers’ program, meaning, support those in the post. Why are they snobbish? Because they have so many deadlines. Some have to think about such heavy problems daily, problems that make it difficult for them to sleep. We need to find a way to distribute the responsibilities,” said Ople.

In one of her meetings with Marcos, she explained the need to require MWO or POLO personnel to pass exams and undergo better competency screening.

“I said I want to bring back the requirement of exams, similar to those in the foreign service. There’s an exam, a panel interview so that they know this is not an ordinary job you can take just because you want to go abroad. Not like that, there are competencies involved,” she said.

But Ople said even before implementing her target reforms, she would consult OFWs themselves first, through town hall meetings she would likely conduct starting August or September.

“We will go online just to hear them out and say, ‘These are our plans, what do you think, how can we refine this further?’ Because we also have to explain what the department is all about,” said Ople.

“They should feel it’s their home in the bureaucracy. Ito ‘yung bahay niyo (This is your house) so please tell us, kung baga sa bahay (like in a home), what would make you more comfortable.” – Rappler.com