The canvassing of votes for party-list groups and senators is underway at the Philippine International Convention Center in Pasay City.

The Commission on Elections convened as the National Board of Canvassers to officially count the votes.

Figures that are formally tallied during the canvassing are considered the partial, official results of the 2022 senatorial and party-list races.

Garcia: No proclamation certificate for party-list groups with pending cases

Commission on Elections Commissioner George Garcia said the poll body will not issue certificates of proclamation to party-list groups that have pending cases before the Comelec.

The Comelec has yet to identify such groups, but progressive groups Gabriela and Kabataan – both of which are guaranteed to secure a seat in the 19th Congress based on the partial, official tally – have unresolved cases seeking to junk their accreditations, filed by the National Task Force to End Local Communist Armed Conflict.

A lawyer for ACT Teachers, which is under the Makabayan bloc like Gabriela and Kabataan, noted during the canvassing on Wednesday, May 25, that back in 2019, the Comelec proclaimed groups under the left-leaning bloc after canvassing despite pending cases against them.

Party-list group Senior Citizens also said its motion to deny the registration of United Senior Citizens has not been resolved. The latter’s accreditation was junked at the division level but it filed a motion for reconsideration with the Comelec en banc.

Proclamation of winning party-list groups set on May 26

The National Board of Canvassers will resume session on Thursday, May 26, at 4 pm to proclaim party-list groups that secured the 63 seats allotted for them in the House of Representatives, Commission on Elections Chairman Saidamen Pangarungan said on Wednesday, May 25. 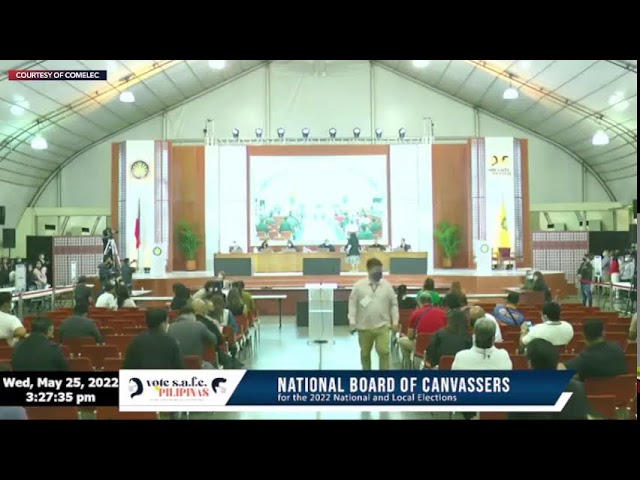 The last remaining certificate of canvass (COC) for the 2022 party-list election has been included in the final tally, after the Commission on Elections, sitting as the National Board of Canvassers (NBOC), resumed session on Wednesday, May 25.

The NBOC formally tallied the 500,000 votes in Lanao del Sur, where a failure of elections in some barangays resulted in provincial canvassers’ inability to transmit election results on May 9.

NOW: We’re still here at the Philippine International Convention Center in Pasay City. The Comelec, sitting as the National Board of Canvassers, will proclaim the 12 winning senatorial candidates later. @rapplerdotcom pic.twitter.com/7pweAot7la

Scheduled partial proclamation of party-list winners on May 19 postponed

The National Board of Canvassers (NBOC) will not push through with the scheduled partial proclamation of winning party-list groups on Thursday, May 19, Commission on Elections spokesman Rex Laudiangco said on Tuesday, May 17.

The supervisory group, in its recommendation, told the NBOC that the election results from Lanao del Sur that have yet to be included in the official tally may still affect the outcome of the party-list race.

The NBOC is targeting to count the certificate of canvass from Lanao del Sur after special elections are held in precincts there on May 24.

The Commission on Elections (Comelec), sitting as the National Board of Canvassers (NBOC), approved the recommendation of its supervisory group to proclaim the 12 winning senatorial candidates at 4 pm on Wednesday, May 18.

The supervisory group told the NBOC that the remaining certificate of canvass from Lanao del Sur, which has yet to be tallied due to failure of elections in some precincts there, will not affect the outcome of the senatorial race.

The Commission on Elections, sitting as the National Board of Canvassers (NBOC), officially tallied 172 out of 173 certificates of canvass (COCs) by the end of Monday, May 16.

The only COC that has yet to be canvassed is from Lanao del Sur, where some precincts are set to hold a special election on May 24, after failure of elections was earlier declared in some towns.

The NBOC halted the session at 5:50 pm on Monday, and will resume proceedings at 11 am on Tuesday, May 17.

Partial proclamation of winning party-list groups scheduled for May 19

The National Board of Canvassers will proclaim some of the winning party-list groups on Thursday, May 19, at the Philippine International Convention Center in Pasay City.

“Not all 63 seats will be proclaimed on Thursday. It will only be limited to those who are sure to have garnered the guaranteed seats,” Comelec spokesman Rex Laudiangco said.

Determining which groups belong to the top 63 seats is rather complicated, as the NBOC follows a computation decided by the Supreme Court in 2009.

Winning party-list groups are allowed to have two representatives each at the proclamation venue.