Typhoon Gorio set to exit PAR after landfall in Taiwan 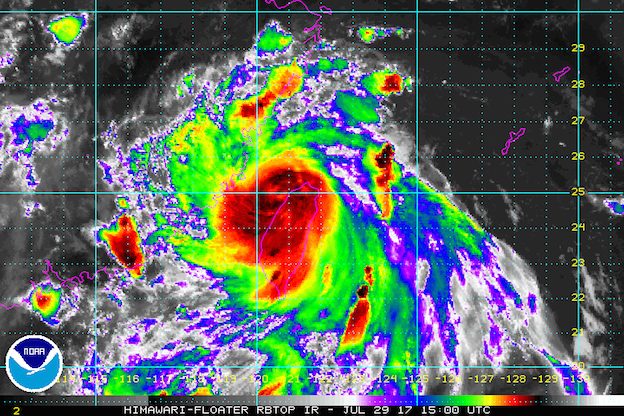 MANILA, Philippines – Typhoon Gorio (Nesat) is about to leave the Philippine Area of Responsibility (PAR) after making landfall in Taiwan on Saturday evening, July 29. Taiwan is still within PAR.

The typhoon continues to have maximum winds of 145 km/h and gustiness of up to 180 km/h.

PAGASA forecaster Robb Gile, in a news briefing late Saturday evening, said Gorio is expected to leave PAR around midnight or before dawn on Sunday, July 30. Meanwhile, PAGASA is still monitoring Tropical Storm Haitang, which is outside PAR. It is 405 kilometers west northwest of Laoag City, Ilocos Norte, moving northeast at 20 km/h.

Haitang has slightly weakened, with maximum winds of 65 km/h and gustiness of up to 80 km/h.

PAGASA said this tropical storm might enter the northwestern boundary of PAR on Sunday afternoon. If it enters PAR, it will be named Huaning.

In the meantime, both Haitang and Gorio are still enhancing the southwest monsoon.

Monsoon rain which may trigger flash floods and landslides will continue in Ilocos, Cordillera, Bataan, and Zambales. There will also be light to moderate rain in the rest of Central Luzon and in Cagayan Valley.

The rest of Luzon, as well as the Visayas and Mindanao, will only have isolated rainshowers or thunderstorms.

PAGASA also warned that sea travel is risky in the seaboards of Northern Luzon and the western seaboard of Central Luzon and Southern Luzon. Fishing boats and other small seacraft are advised not to venture out into these areas, while large sea vessels should watch out for big waves.