Facebook Twitter Copy URL
Copied
Typhoon Perla (Neoguri) has maximum winds of 120 km/h and gustiness of up to 150 km/h as of Saturday evening, October 19

MANILA, Philippines – Perla (Neoguri) intensified from a severe tropical storm into a typhoon at 8 pm on Saturday, October 19.

In a briefing past 11 pm on Saturday, the Philippine Atmospheric, Geophysical, and Astronomical Services Administration (PAGASA) said Typhoon Perla now has maximum winds of 120 kilometers per hour (km/h) from the previous 100 km/h and gustiness of up to 150 km/h from the previous 125 km/h.

The typhoon is already 580 kilometers east northeast of Basco, Batanes. It decelerated and is slowly moving north.

Perla is not expected to make landfall in the country and there are no areas under tropical cyclone wind signals. PAGASA said no “significant high-impact weather” is expected. (READ: FAST FACTS: Tropical cyclones, rainfall advisories)

Based on Perla’s latest forecast track, it might leave the Philippine Area of Responsibility (PAR) between Sunday evening, October 20, and Monday morning, October 21. 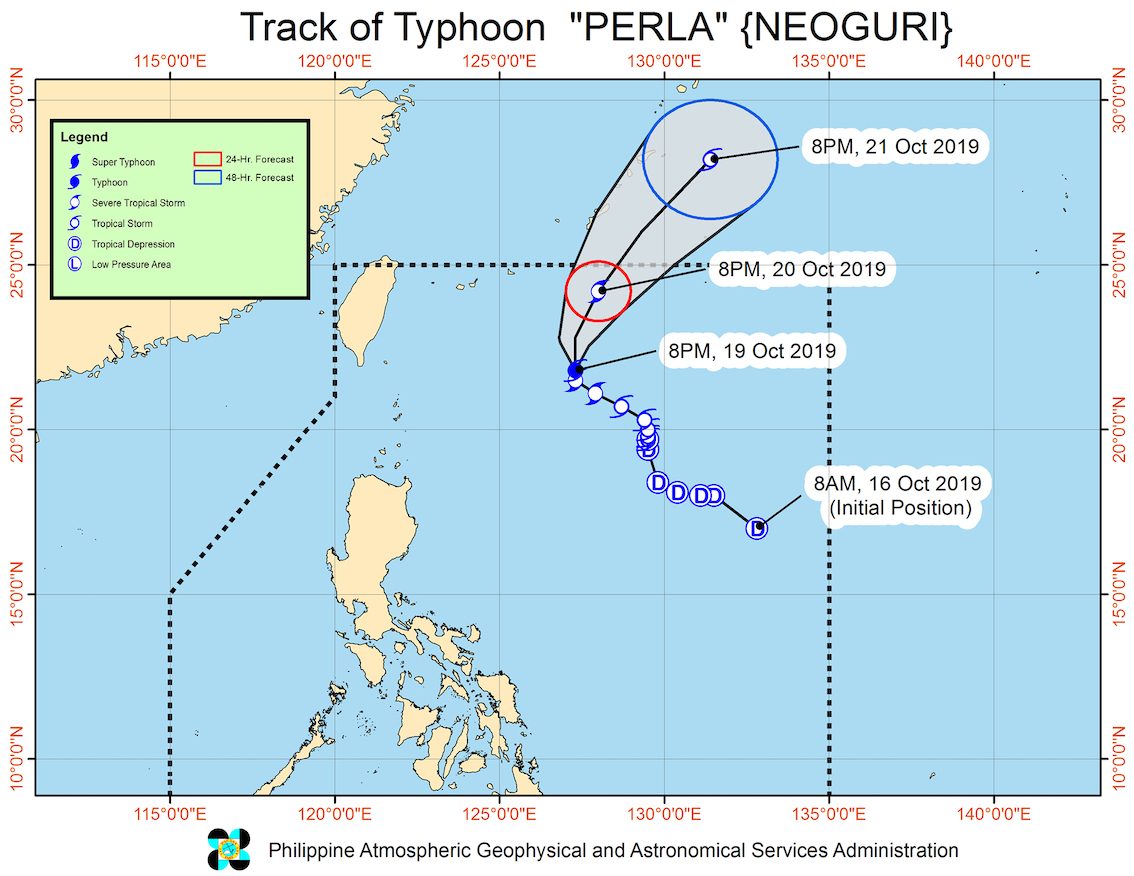 PAGASA also continues to monitor a shallow low pressure area (SLPA) and a tropical cyclone which are both outside PAR.

The SLPA is now 1,830 kilometers east of Southern Luzon. It is moving west and could enter PAR on Monday or on Tuesday, October 22.

PAGASA Weather Specialist Ana Clauren said the SLPA only has a slim chance of becoming a tropical cyclone, though this possibility is not being ruled out.

It could also make landfall in Central Luzon or Southern Luzon in the coming days.

Meanwhile, the tropical cyclone outside PAR has since strengthened, becoming a tropical storm from a tropical depression on Saturday evening. It has been given the international name Bualoi.

Tropical Storm Bualoi is now 3,045 kilometers east of the Visayas, moving west at a slower 20 km/h from the previous 30 km/h.

Bualoi might enter the northeastern portion of PAR in the coming days, but it might just stay near the boundary and not make landfall.

In the meantime, there may be occasional gusts in extreme Northern Luzon until early next week due to the northeasterly surface windflow.

The windflow may also continue to bring isolated light rain to these areas on Sunday:

Also due to the windflow, travel remains risky in the seaboards of Northern Luzon, especially for small vessels.

The rest of the country will continue to have fair weather on Sunday, with just isolated rainshowers or localized thunderstorms.