Facebook Twitter Copy URL
Copied
As projected, Ramon (Kalmaegi) is gradually weakening after making landfall as a typhoon, while Tropical Depression Sarah decelerates a bit on its way to Northern Luzon

MANILA, Philippines – Ramon (Kalmaegi) weakened from a typhoon into a severe tropical storm before dawn on Wednesday, November 20, while moving further inland in Cagayan. Tropical Depression Sarah, meanwhile, slightly slowed down while heading for Northern Luzon.

In a bulletin issued 5 am on Wednesday, the Philippine Atmospheric, Geophysical, and Astronomical Services Administration (PAGASA) said Ramon now has maximum winds of 100 kilometers per hour (km/h) from the previous 120 km/h, but its gustiness increased to 165 km/h from the previous 150 km/h.

PAGASA earlier said Ramon would “significantly weaken” after making landfall, “due to land interaction and the northeast monsoon.” It is likely to keep getting downgraded until it is only a low pressure area.

The severe tropical storm is now in the vicinity of Baggao, Cagayan, still moving southwest at only 10 km/h.

There are no more areas under Signal No. 3, but Signal Nos. 1 and 2 remain raised due to Ramon.

Ramon continues to bring rain as it crosses land.

Thousands of residents fled their homes ahead of Ramon’s landfall, fearing possible flash floods and landslides.

PAGASA warned that flooding may be experienced in coastal areas of Northern Luzon, especially in its western and northern portions. There are high waves near the coast because of Ramon and the northeast monsoon. (READ: FAST FACTS: Tropical cyclones, rainfall advisories) The tropical depression is now moving northwest toward Northern Luzon at a slightly slower 25 km/h, compared to 35 km/h earlier.

It continues to have maximum winds of 55 km/h and gustiness of up to 70 km/h. But it could intensify into a tropical storm within 12 hours.

Some areas are now under Signal No. 1 due to Sarah – overlapping too with several areas included in the list for Ramon. Note that this means residents who will be affected by Sarah are being given lead time of 36 hours to prepare, which is why Signal No. 1 has already been raised.

Like Ramon, Sarah will trigger rain in Northern Luzon, beginning Thursday, November 21. Flash floods and landslides will also be possible.

Landfall in Northern Luzon is possible as well for Sarah, around late Thursday evening or early Friday, November 22.

If Sarah maintains its speed and direction, it might leave the Philippine Area of Responsibility on Saturday, November 23.

Sarah is the Philippines’ 19th tropical cyclone for 2019, and the 3rd for November. 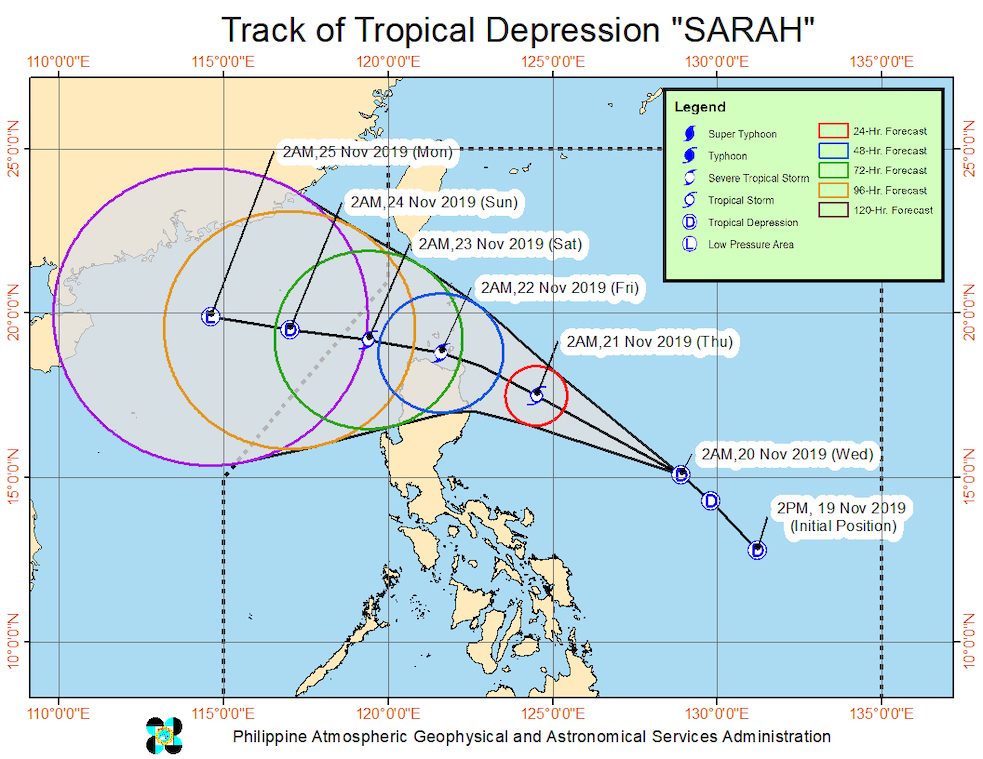