Facebook Twitter Copy URL
Copied
(2nd UPDATE) The effects of the tropical storm would be felt by Monday morning, said PAGASA; Domeng is forecast to make landfall on Wednesday

MANILA, Philippines (2nd UPDATE) – It will be rainy in most parts of the country at the start of the week as Tropical Storm Domeng (international name Peipah) entered the Philippine Area of Responsibility (PAR) on Sunday night, April 6.

In its April 7, 5 am bulletin, state weather bureau PAGASA said Domeng was located 880 kilometers east of Davao City as of 4 am, and is forecast to move at 15 kph in a west-northwest direction.

PAGASA said that Domeng has maintained its strength, with maximum sustained winds of 65 kph near the center, and gustiness of up to 80 kph.

In a phone interview, forecaster Buddy Javier of the state weather bureau PAGASA said that Domeng entered PAR at around 6 pm.

The effects of the storm, said another forecaster, Meno Mendoza, would be felt by Monday morning, April 7. 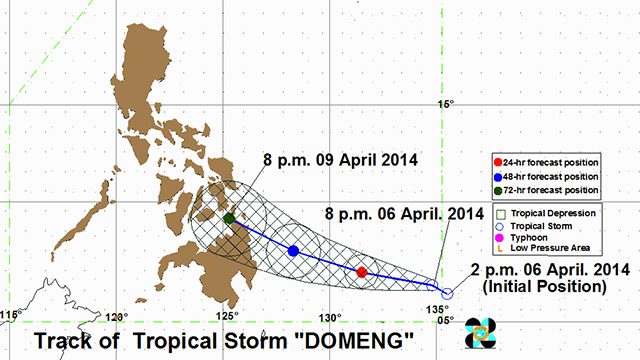 Javier said that the storm may make landfall by Wednesday afternoon, April 9, if its direction and strength would not change. Domeng is seen to be at 30 kms west of Surigao City by Wednesday evening, said the April 6, 11 pm bulletin.

Moderate to heavy rainfall (5 to 15 mm per hour) is expected in areas within the 400-km diameter of the storm.

In its 24-hour public weather bulletin, PAGASA said Mindanao, the Cagayan Valley, Eastern and Central Visayas would see cloudy skies with scattered rain showers and thunderstorms. The affected areas include those still recovering from the devastation caused by Typhoon Yolanda (Haiyan) and flooding caused by weather systems earlier this year.

Metro Manila and the rest of the Philippines, meanwhile, would see partly cloudy to cloudy skies with isolated rain showers or thunderstorms in the afternoon or evening.

PAGASA advised those living in areas that will be affected by Domeng, as well as the disaster risk reduction and management councils to take appropriate actions and watch out for the next weather bulletin to be issued at 11 am on Monday, April 7. – Rappler.com