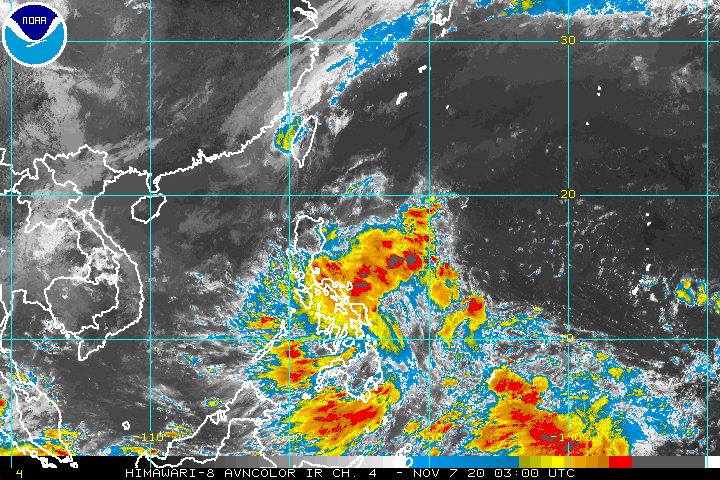 Heavy rain is expected in the region of Bicol and in Samar Island – divided into the provinces of Northern Samar, Eastern Samar, and Samar – on Saturday, November 7, as a low pressure area (LPA) approaches.

In an advisory at 11 am on Saturday, the Philippine Atmospheric, Geophysical, and Astronomical Services Administration (PAGASA) said the LPA is now 205 kilometers east of Guiuan, Eastern Samar.

It continues to move toward the region of Eastern Visayas, of which Samar Island is part of, and may reach the area on Saturday afternoon.

PAGASA warned that the LPA is likely to develop into a tropical depression within 36 hours or during the weekend. This may happen when it is near or already over Philippine landmass. (READ: FAST FACTS: Tropical cyclones, rainfall advisories)

When the LPA becomes a tropical depression, it would be given the local name Tonyo, as the Philippines’ 20th tropical cyclone for 2020.

Signal No. 1 would be immediately raised as well, to warn residents of the impact of tropical cyclone winds.

As of 11 am, PAGASA updated its rainfall forecast for the LPA. Below are the affected areas.

PAGASA warned that floods and landslides could occur, especially during heavy or prolonged rainfall in high-risk areas and in areas that already received significant rainfall from tropical cyclones Pepito (Saudel), Quinta (Molave), and Rolly (Goni), which all hit Luzon within the past 3 weeks.

Rolly, in particular, pummeled Bicol as a super typhoon and Calabarzon as a typhoon last November 1.

The LPA and the easterlies will also cause moderate to rough seas, with waves 2 to 3.5 meters high, in the following seaboards:

The Philippines has had 19 tropical cyclones in 2020, with the latest one Severe Tropical Storm Siony (Atsani), which hit extreme Northern Luzon and left the Philippine Area of Responsibility (PAR) at 12 am on Saturday.

In early October, the state weather bureau warned Filipinos to expect more rain in the coming months due to the onset of La Niña.

The onset of the northeast monsoon or hanging amihan was also declared on Friday, November 6, which means there will be “surges of cold temperatures.”