Facebook Twitter Copy URL
Copied
What led to its quick abolition? After a petition by lawmakers allied with Arroyo, the Supreme Court ruled it unconstitutional.

MANILA, Philippines – On this day in 2010, former President Benigno Aquino III’s very first Executive Order (EO) took effect. It mandated the creation of a Truth Commission, envisioned to probe alleged corruption and other controversial cases under the Arroyo administration.

The commission, however, never came to be as the Supreme Court ruled it unconstitutional in the same year.

What led to its early demise? Here’s a quick look back.

July 26 – Aquino mentioned in his very first SONA he would sign an EO creating the Truth Commission. He said it would be headed by former Supreme Court chief justice Hilario Davide Jr.

July 29 – Aquino announced he had finally signed EO 1, which officially created the commission.

July 30 – EO1 took effect. Based on the EO, the commission would be composed of a chairman and 4 members, and would act as an independent collegial body. The Truth Commission was given a December 31, 2012 deadline to accomplish its mission.

August 12 – Representatives Lagman, Rodolfo Albano Jr, Simeon Datumanong, and Orlando Fua Sr filed a petition against the commission before the Supreme Court. A separate petition was filed before the SC by a certain Louis Biraogo.

September 7 – The SC held the first oral arguments on the petitions filed against the EO. 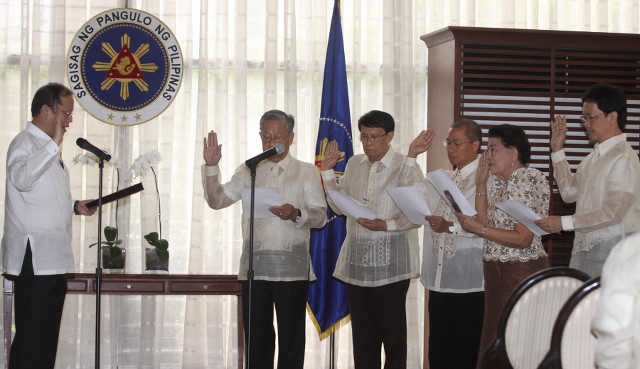 September 14 – Aquino swore in Davide and other members of the commission in an oath-taking ceremony that took place in Malacañang.

October 15 – The commission announced it was ready to receive complaints against the Arroyo administration, but admitted it won’t be able to immediately act on the complaints due to a pending petition before the SC.

July 26 – The SC ruled with finality on the fate of the commission. – Rappler.com